Graduation and Study for the Bar 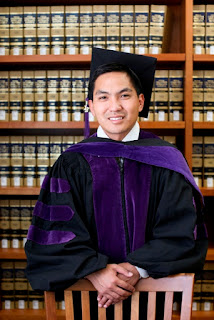 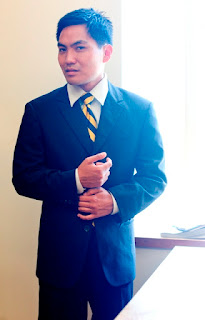 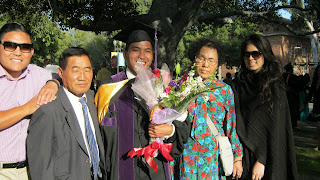 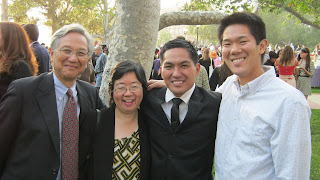 I graduated.  It was stressful to manage the family politics, but in this event, everyone came together and didn't cause WW III or another Cold War.  Keep in mind, my guests were from North Korea, Japan, Russia, Denmark, the USA, and Taiwan and South Korea.  No Germans that represented.  :(

The combination could've made for a difficult political situation, but in this case people behaved, especially my family.  That was certainly a relief.

Graduation for me was just eh and blah, except for the fact that I have very caring and loving people in my life that came to celebrate it with me.  It was more for them than it was for me.  The funniest part of it all was that people had brought in alcohol inside the room where we prepared for graduation ceremony.  It was early in the afternoon, and I thought to myself, why didn't I think of that.  Why is there a hint of negativity in all of it?

Well, because graduation marks an end, right?  Well, not for 95%+ of law graduates of 2012 across the country and me.  After just one week of rest, we have to start studying for the BAR - which is perhaps the final of all finals.

I only had one week off between my last year of school and the bar. and then the studying started.  It's the final of all finals, as it spans 3 days, and covers 12 subjects of law, which if one took each of those subjects consecutively as classes, it would take two years to complete.  The BAR is divided into 3 parts: the multiple choice (one full day), 6 essays and a performance examination (2 days).

Studying goes something like this.  8-10 hours a day, everyday for 6 weeks.  Half a day on Saturdays.  Then in the last month, 12 hours everyday (no more breaks.)  =(  As the Koreans say, "Starting is half the battle."  I definitely was not enjoying the self-discipline to re-start classes I had to refresh from three years ago.  I kept reminding myself , why didn't you use your week to take a holiday in Cancun?  No point in crying over spilled milk.  I didn't have the miles to afford to travel this time, and I decided to spend my free time with my family and friends just hanging out.

So - do I have any wisdom or magical advice about going through a marathon like this?  It's nothing you don't already know.  I'll state my principles nonetheless.  Work hard, stay focused, and success comes in the day-to-day small activities.  Do them well.  And during times that require endurance, remember: happiness is surely overrated.
Posted by Paul C. at 10:56 AM No comments:

My Life In Review

The last few days have closed certain chapters in my life.  I know - that sounds dramatic, but it's true.  For instance, I finished my last school examination of my life.  That's it!  No more.  And heck yeah!  That's about 8-9 years of post high school, and I think I estimated I've taken over 100 school exams if not more during that period.  I do not, ever, repeat: ever, need another school exam in my life.  If this all sounds melodramatic, it's not - at least not if you've been through a good law school.  I've had 15 written exams and 3 clinical exams in my law school tenure.  Each exam is anywhere from 3-6 hours.  Even though I have to revise a 20-25 page paper, I can tell you it really felt like a burden lifted off of my chest and shoulders.  I might go back to school but not for a certificate or degree.  If anything, I'd like to get some of my foreign language skills more proficient.

Another chapter is next month I'll have to say good bye to my 20's.  I'm going to be hitting the age of 30 soon.  With that, brings some harsh realities.  Here's one: people are dying around me.  And since the baby boomers are a bigger population than my Y generation, my generation will see more people die than I think our subsequent generation.  Isn't that a morbid thought?  You're probably wondering why I bring this up.

Well - my neighbor, who I've known since I was two years old passed away.  Before you feel sad for me or him, we weren't that close.  So - no sympathy really needed - although I suppose a human being dying is a sad thing.  It was surreal though.  I got a call from my mother while I was studying for that final final, and she said, "I have sad news."  My heart dropped.  I thought it was my 15-year-old cat Luke who had passed away.  He does have skin cancer.  She just said, "The neighbor passed away.  I can't believe it.  I talked to him the moment before he died.  He was mowing the lawn, and I said, 'Hi.'  Then he had a heart attack and died.'"

I'm writing about this because I made some observations about that neighbor.  In general, he was a nice guy.  I didn't know that much about him.  I went inside his house once because his daughter, who was a classmate, invited me over once.  Other than that, I noticed that in his last year of life he entered into retirement.

He was 65 when he died.  I can say I genuinely saw him enjoy life.  He was the happiest I ever saw him in retirement.  He bought a Mercedes convertible and drove it with the top down.  He was gardening more - evidenced by the fact he mowed the lawn before he died.  He also spent a lot more time with his grandchildren; he was practically raising them.  And then, he croaked.

I thought to myself, isn't that cruelly ironic that he worked a job he didn't particularly love for 30 years only to retire, fantastically enjoy one year of life, and then die.  I remember having dinner with my father once and telling him I wanted to retire at 30.  At the time, I must have been 25, and it looks like that future I envisioned ain't happening.  But he said, "That's way too early to retire!"

I replied back, "So you want me to retire when my body is old and useless.  I won't be able to be as healthy.  I'll be unattractive.  What will I do with my time then?  I can't even travel."

That is exactly the point I'm making about the neighbor.  He retired when he was not in good health - and for what - to enjoy one year of it and croak.  The whole concept of retirement got to me - and bothered me.  It made me put my life back into perspective.

In contrast, I have a 15 year old cat, Luke, who is fighting skin cancer.  I think he's doing a mighty fantastic job of fighting the good fight.  Maybe because even though he's an animal, I think he knows he has a purpose.  His age in human years probably translates to about 65-70 as well.  If he spoke English, I'm also certain, he'd say he's had 15 happy years if he died today.  I know, our family fostered that happiness for him.  Of course he never had to work or worry about life's stresses, but still, it has to be quite an accomplishment to say that he lived a life of being loved and reciprocating it for 15 years.  He still has more years to go; I'm sure.

Now - if you've ever been caught in these cycles or circles, like I have, it's good to remind yourself you're not trapped in some infinite loop.  It's more like a spiral with added depth and dimension.  I never had all the answers to make the decision to this question, but I feel like I've picked up more pieces of the puzzle every time I'm confronted with this question.

Only this time, I look at what happened with my neighbor and what's happened with Luke.  I then tell myself, remember, you only live once.  That's a good starting place.  You live bound by time, and you live life one moment at a time.  Time moves the same for you as it does for everyone.  What will you do with it?  And for God sake, whatever you do as a living, make sure you enjoy it.  Don't put in thirty miserable years defining yourself by what you make and take, but put those years into defining yourself by what you create and give.

Those principles don't leave me with any concrete future plans, though I think I have some sketched out path ahead.  If you have any advice, I'm open to it.  Until then, I have one last paper to revise.  Overall, I'm happy that I'm reframing my life back into perspective.  It's really shown me that a lot of the petty things we care about, such as status, accolades, keeping up with Jones', and taking everything so damn seriously is seriously not worth a damn.