How to Make Over $1.8 Million in Two Years? Be a Corrupt City Director.

Want to know how you can make at least $1.8 million in two years, which is $68,000 every month, while being under-qualified and potentially uneducated and not doing much? To find out, ask Baldwin Park's Director, Gustavo Jeraldo Romo. He made that much in about two years and two months working both as the Baldwin Park's Community Development Director and CEO and owner of the Romo Planning Group Corp. After collecting this amount, Romo has suddenly stated he will resign as director of the City of Baldwin Park. The news comes after the FBI has been investigating city officials in the City of Adelanto, who Romo collected over $1.5 million from in a little over 2 years. The FBI has recently raided the home and business of Adelanto's Mayor, Rich Kerr's, and the U.S. Attorney is taking former Mayor pro tem, Jermaine Wright to trial for charges of bribery and attempted arson. Romo's connection with both corrupted cities, 70.1 miles (112 kms) apart, shows us a pattern of sprawling business and political relationships that are glued together solely for profits from the cash crop of Marijuana. Baldwin Park and Adelanto are proving that the state's legalization of marijuana is leading to further corruption and illegality, the restriction of a free market, and a bad deal for municipal bonds investors.

Romo had such a good deal. (That is until he got caught.) For instance, he would bill for talking on the phone about marijuana for two hours and collect $210 on it. What a dream come true for some high schoolers! The Romo Planning Group was billing Adelanto since January 2016 until March of 2018. Romo's most expensive invoice came out to $112,000. The billing can't be verified to determine if Romo indeed created false bills or whether the employees that are working the alleged hours are real humans or not.

Nonetheless, with all the work being done, there's a problem here. How did Romo, as a director of Irwindale (2016-2017), later hired by Baldwin Park (2017-current), manage to work two jobs at once? Activists in Adelanto asked the same question and grew concerned.

When he wasn't appearing for work as director of Baldwin Park, where he was also making over $140,000, where was he? Well; he was being spotted often with Adelanto's Mayor, Rich Kerr.

I personally questioned Romo about how he works at two places at once. He emailed back that his wife, Elizabeth Romo, a beautician and hair dresser, and staff are running the company while he works in Baldwin Park.

But an anonymous witness actually accused Romo of being the personal advisor to Kerr. The witness stated that Romo tells Kerr on how to violate Adelanto's City Charter, presumably to make profits at the expense of Due Process. (This allegation needs to be further investigated, but the tip appears consistent with this investigation.)

Feeling that his cashflow may dry, Romo replied what he thought about the FBI raid. Romo said, "It’s unfortunate what that small town has gone through."

When asked if the FBI has a duty to investigate corruption on behalf of the citizens, Romo refused to comment any further.

A look at Romo's past paints a picture of financial management and desperation and greed. Romo has two foreclosures, one in Upland on May, 2010 and one in Covina, June 2012. He also filed Chapter 7 Bankruptcy in August of 2012.

I asked him whether he should pay the people he owed by filing bankruptcy?

He refused to respond.

Although Romo alleges he has a degree from Sierra Vista High School, Cal Poly Pomona, and an MBA, when asked for proof of these degrees Romo refused to provide it because, he says, "I don’t want it to appear as if I’m bragging." He was also concerned about publishing a copy of his degrees.

I assured him I wouldn't publish in on my site. Three times he agreed to provide copies. Nothing has been provided so far.

Romo's greed, fleecing, and deception only prove a larger pattern of corruption that runs rampant in politics. Doesn't anyone find it unusual that the mayor, the chief of police, the former finance director, at least one council member, and the current community development director all filed for bankruptcy? What about the fact that all of them have California social security numbers, when they all have ties to Texas? After all, multiple social security numbers are required for identity theft, which is then needed to defraud people and institutions. Finally, isn't is unusual that all these public officials and administrators all have private companies, like Chief Michael Taylor and his security consulting company (or Council Member Pacheco's solar energy company, AMS Energy), which are then used to bill other cities and government agencies? Nobody finds this incredible or outrageous how rampant this has all become?

For sure, this is the tip of the iceberg. I wonder what other cities the Romo Planning Group billed. And given his sketchy past, it makes me wonder if he was a former criminal that's not been put in some witness protection program. In fact, I've posted a mugshot of a photo that matches the facial biometrics of his picture above. Anyone with more information should please let me know.

To me, the bigger picture is becoming clearer. It looks like that these poverty-stricken cities are being run by crime syndicates focused on profiting off of taxpayer money. Sadly, this is all proving that democracy doesn't function in working class cities like Bell, Baldwin Park, or Adelanto. The solution needs to focus on successful prosecution of government officials and administrators; otherwise, crime does pay. And handsomely too.

As Russian Noble Laureate, Aleksandr Solzhenitsyn once said: "Beat a dog once and you only have to show him the whip." 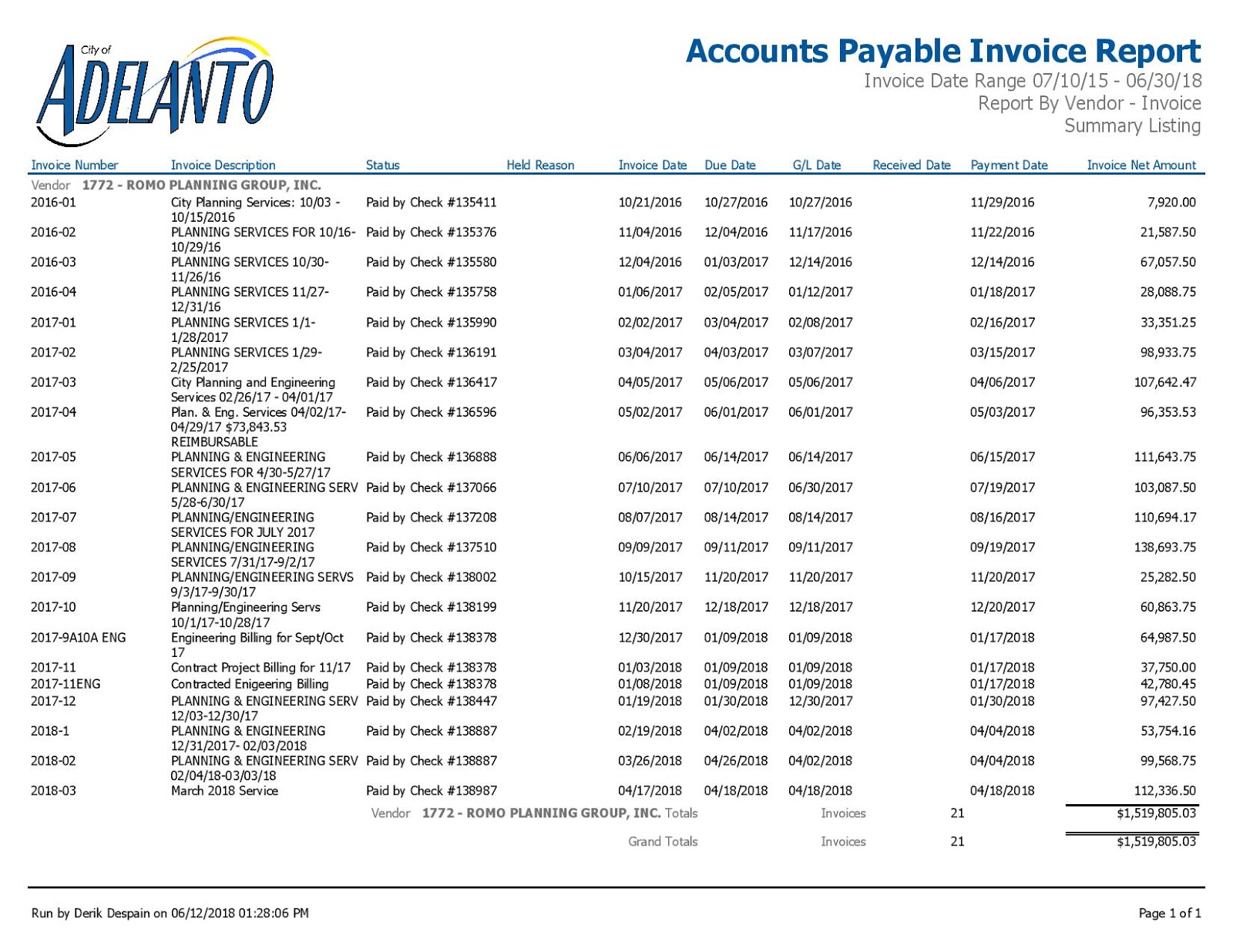