So - this post ends my series of my winter European travels. Yet, this post picks up
at the beginning. It's my first destination.

I buy some food. They have all kinds of food stalls - coffee, pretzels, German sausages, and crepes. When you're in Europe, chose the Crepes. I get a Cheese crepe. In line, I ask the girl how do you say change in German.

She smiles and says, "Gut."

When the person tried to correct me, I laughed and said, "Ich wisse." I said, "I know," before he went on to embarrass me.

The two Germans at the time ignored it and then couldn't help it. They reacted by laughing. And I said, "What the hell is she saying?"

I believe that was my third day in Germany. Germans are great people! In that incident, I had learned several things. I had learned that useless line. I had also wondered, why did she single ME out instead of the other two German guys. This is a theme that happens - over and over again to me in Germany.

So, when I made the faux pas I completely understood what I had sad. I blushed and said in Germany, "I'm sorry. Do you have any change?"

I cut the crepe in half with a plastic knife. A homeless man begged me for money. I gave him the other half of the crepe. He touched my hand and thanked me. I smiled and said, "Bitte." (You're welcome.)

I was in the bookstore. Along this line of conversation, I watched the African guy peruse through the playboy magazines. It's Christmas. He's perusing through naughty magazines. Haha.

I then waited at the same platform that I waited two and a half years ago. Deja vu. I get inside the train. It's midnight. I go inside to the kitchen compartment. I remember last time, the first train I took in Germany was full of drunk people in the morning. Now, I'm here at night and there are not that many people in the carts.

When I get to my seat and enter a cart full of people, I notice the people are staring again. Yes, I'm the only asian in the cart. And I stand out like a sore thumb, but at least their more curious than resentful.

I can see, even through the nightfall, the fields of corn and wheat. It's the same train ride I took two and a half years ago.

When I get off the platform, there is Volker. He is wearing the same leather jacket. Just like last time he picked you up - I thought. My re-visit to Germany is almost exactly like the first time I came, except I think I can communicate with the natives in their language now.

Volker is happy to see me, and I him. We catch up about everything.

One theme that happened quite continually was people testing me. Test the American you can say. Volker's friends were surprised I came back. Some of them and I took a 100km trek across Germany last time I was here. It took three days, and we crossed forest, mountains, and Germany waterfalls and creeks.

One of them says, "Hey Paul? Do you want to go running?"

1pm tomorrow, they're there on the dot. They were in running clothes. I was in t-shirt and shorts. I have to show them how strong an American is, even in the freezing German winter.

I hear Volker say in German, "Take him to the Castle."

We start our run, in the start is hard because its on a high uphill incline. My heart races faster. My breath is shorter. And I think to myself, Damn it. You better finish whatever they got up their sleeves. Otherwise, they'll tell Volker you're a weak, lazy American. They will you know. And they'll say it over and over again. The thought presses me forward. My body - as I knew it would - begins to adjust to the pace. 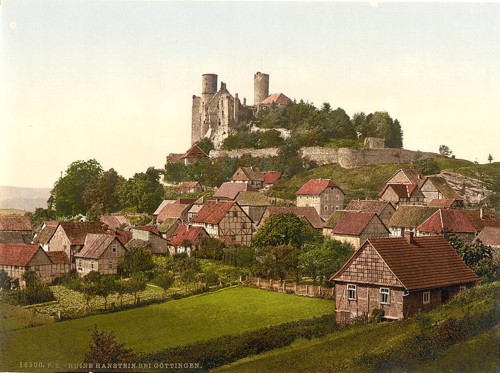 We reach the Castle. It's a nice Castle. We explore it a little. But then we run back. In total, I believe we ran about 10 miles. I can't say I was the best. I was the worst of the three, but I finished.

I email my Bavarian friend Ben and wrote, "Ben, you'll be happy to hear I was not the best." Ben hates hearing me brag, so I had to tell him about this incident. "We ran 10 miles to a castle, and I was struggling."

Ben writes back, "Hahaha. What were you thinking? Germans train since kids to run to castles." Stupid Ben. GRRR...

Volker's friends ask if we want to go running again tomorrow. They ask what time, i said, "11am." They're again there on the dot that day.

This time they take me a mountain forest, where it's hailing, sleeting, snowing, and raining all at once. I'm bloody freezing in this 8 mile run. My hands go numb, but I finish this trek too. They took me to some snow forest.

When I place my hands in hot water, it's an interesting experience. At first, I feel nothing. Then I feel pain and more pain. My hands are throbbing and the hot water makes my hands feel like it's on fire. They ache. Then, slowly the pain subsides and it feels normal again.

I just imagine Ben telling me, "We train to run in the snow since kids too." Anyways, I'm from Los Angeles, born and raised. We don't have snow! In any event, Americans are strong people because they can just go to other countries and acclimate to the local condition.

I come out of the shower and say, "I don't feel BRRRR" anymore." There was mud on my shoes. Mud on my ankles and knees. Snow in my hair. It was all washed away clean.

One of the days, Volker takes me to a Christmas market. A Christmas Market is like a little County Fair with a whole bunch of traditionally looking German stalls. People go and drink mulled wine and chit chat and eat food. It's a rather good at community building. You can hear friends and family coming together and laughing and catching up. That's what Volker and I did.

When we came back, his friends and us talked. Mulled hot wine is nice in the winter. IT's better with hot food. And it's best with good friends.

And then - there was the night club. Volker took me to a nightclub. There several things happened to me. One, a girl who looked very butchy grabbed me. SHe was stocky, muscly, had a mowhawk and piercings everywhere. I was sitting down when she approached me. Smiled. Spoke German I couldn't understand. Then placed her hand on my back and kissed me on the cheek. There we go again with being targeted.

THen I was standing there and a German youth around 20 asks me where I'm from. When I say America, he starts chatting me up. He presses his hand against the center of my back, and Volker sees me and says, "Paul." I leave with Volker.

After awhile of having one drink too many - some of you have been there and tell yourself this when you've done it - we want to go home. I go look for Volker, and he's chatting up a woman, who gives off a desperate vibe. I said, "Come on Volker - we need to go."

Volker and his sister take me to the German sauana. You know - they're naked there. Everybody. Guys and girls. Don't you think it's weird a brother and sister would see each other naked? Oh well - Deutschland.

Volker's gained weight. I tell him. He says, "Shut up, Paul."

I take off my clothes and show him my toned body and say, "See, not nice like this."

I went to the gym with Volker at a different point in time. My outfit is a UCLA Law shirt. He says, "You are such a show off, Paul. A show off!" This moment reminded me of that comment.

In the main hall of the sauana, on the hour, an employee comes and does something special for you. You sit naked with all these other naked people, mostly older people who don't care about how they look anymore. The attendant brings you either honey or kosher sea salt. You rub it on your skin. I think to myself - they're going to turn me into Korean BBQ. Sometimes, the attendant uses a large towel and creates an air vortex with it. She then fans a gust of hot air in your direction. It blows and washes against your skin and makes you feel like you're going to die of heat.

After, they bbq me, there's an ice lake outside. I jump in. I freeze. I then scream, "AHHHH!!!!" The Germans laugh at the little asian boy and say,

I shake the water off of my hair like a cat shakes water off its fur. I hope the few drops of water sprays the laughing Germans.

I stay with Volker for New Years. We had an interesting German New Years. I told him I think this year will be a good year for me. The Koreans say what you do on the New Years is what happens for the rest of the year. So does that mean, traveling will be coming up again for me? Who knows?

On New Years day, Volker takes me to my new ride to Munich. He hugs me. He says he'll see me soon in America. Time to go to Munich.
Posted by Paul C. at 1:03 PM