A Road Trip for Boxers

I took my coach and my boxing kid on a road trip to Santa Barbara for the kid's birthday.  My kid's never seen the ocean, even though he's lived in Los Angeles County.  We went for two days, one night.  We got to stay at the luxurious Hilton, compliments from them from all of my travels.  We had an ocean front view, and because I was a gold member, they upgraded our stay.  Below is the view of where we stayed.

The point of this blog post to my reader is that all of us need to get away sometimes and expand our horizons.  For the two boxers, from the inner city, it was a time for them to get perspective.  For me, Santa Barbara is not exotic.  But for them - it was another world.  So much so, that after we returned, my kid said I gotta get out of Baldwin Park.  When was the last time you challenged yourself and went somewhere so exotic?

For me though, I suppose it was a new experience.  For loyal readers of my blog, you'll know that I like trail blazing.  I cut my own path independently.  It was a responsibility to plan a trip for others and make sure that the people on my team enjoyed it.

On day one, we went to the Danish town of Solvang and ate a hearty breakfast of fresh Danish pancakes, wine tasting in Los Olivos, gyming and spa-ing at the four star hotel, and ate dinner at an Italian restaurant on State Street (to celebrate the kid's birthday).

On day two, I made the guys wake up and do a 3 mile beach run.  It was my favorite part of the trip.  The sea mist rolled in.  The rhythmic running forced my mind slipped into a zen state.  I loved hearing the ocean roar while running.  I even saw a Mermaid's Purse, which is a shark egg.  It has to be lucky because it's rare to see.  When I ran back to find it though, I found out the Pacific Ocean grabbed it back.  We then went on a hike.  Picture above.

We ended the trip eating fish and chips on the pier.  Below is me having a picture with a retired couple, whose dream is to have a mobile cafe.  I respect those who follow their dreams; so, I had to take a picture with them.  I had a cigar when I saw them.  I realized later, I probably should have handed it to one of the boxers while the picture was taken.  But I had to take this pic.  Until next time. 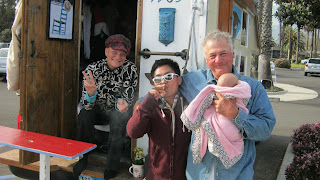