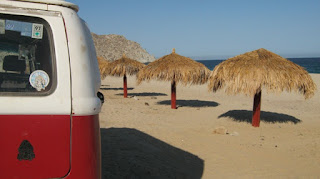 I went in a random Volkswagen bus around the Baja tip of Mexico with an Italian hippie.  He looked like Jesus, except had brown and not blue eyes.

The first day, we arrived at a beach near a Marine Reserve.  Immediately after we exited the bus, a short and fat Mexican guy that wore a dirty white tee shirt approached us.  His blobby body looked like that of a toad: small head, amorphous throat, and a big belly.

He started to speak to the Italian in Spanish.  I could understand the conversation.  He wanted us to pay 30 pesos each for parking on his private lot.  The Italian told him that Mexican law allowed us to walk to the beach.  He agreed but he said that the parking lot was on his land, even though there were federal trash bins on it.  The Italian tried to negotiate with him, but when I saw all was failing, I stepped in.

"No, because our only use of the land is parking the car.  The use of the beach, you can't stop us."

"Yes, but I have toilets for you."

"Well, where you going to pee?"

"Why the animals do it?"

"Close enough.  Hey, but you're not the federal marine reserve police are you?"

"Then it's none of your business."

My Italian friend got mad at me for being so vicious.  He said, "Let's just leave, man."

I tried to explain to him I already saw we weren't going to win with this guy, so of course the gloves came off.  But he was upset that I was vicious.  Toady was so illogical though.  I found out later, the parking area with the federal bins wasn't owned by him anyways.  It was all a lie.

At the next beach, the Italian drove the bus through the sand but the bus got stuck in it.  The more he drove it, the more it dug itself deeper and more entrenched in the sand.  We tried to push and push, but it would not move.  It was stuck

A fat Australian guy, who was huge, and a skinny French guy came and helped us push. 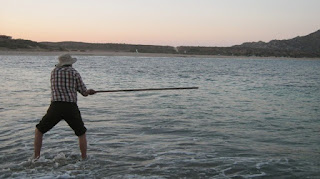 At sunset, I saw little black rays shoot out high out of the water.  They looked like black kites flying in the air.  I ran for exercise during the sunset and also saw sea lions swimming in pairs, butterfly paddling through it.  I watched the Mexican fisherman fly fish, which is done with no bait.  He caught 10 fish.

Then I noticed the silver and posh jeep come by.  The driver ran it through the beach like a maniac.  Two French men, in their forties, came out.  Their jeep was stuck in the sand but it being a fancier car, they were able to utilize the four wheel drive to lodge it out.

They were already drunk and boorish and proud and rude.  Nonetheless, I continued my run.  At night, they asked that I drink with them.

We sat around the fire.  The Italian hippie did not come.  He wanted to be alone but he cooked a rice dinner for us.

The other drunk French guy talked about how he was opening an exclusive night club.

The Australian guy asked if it would be a Sam's club.  And everyone started laughing.

They all smoked weed.  The sleazy French guy, who was called Jerome, kept neck kissing the little Mexican girl in front of us.  They weren't too interested in me, though they liked my politeness.  I drank nothing though.  I did not want to ruin my diet on holiday.

The next morning I came back and the sexy Mexican girl was by herself without Jerome.  She just sat there on the beach.  In the light, she studied me and evaluated me in a different light.  She liked what she saw.  I saw she looked cheapened.

I said good bye to everyone.  The Italian did not.  Cyril and his girlfriend were happy to meet me.  I told them they could visit me in Los Angeles.

The Italian hippie and I took the magic bus and drove to the next beach.  I pulled out a cigarette, though I usually do not smoke, and lit it in his van.  The soothing taste of mint tobacco filled my mouth.