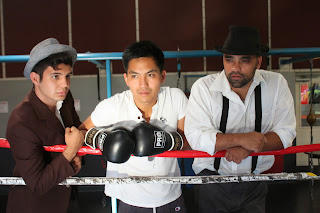 A boxing teenager gave me my first pair of boxing shoes two weeks ago.  It reminded me that it wasn't the adults who just invested in the kids, but the kids  gave back to us too in uncanny ways.

Christian, 17, asked me to help mentor him so that he could go to college.  I agreed.  I thought, why not?  The cost to me was small.  The payoff, if done right, would be high.  It could change his life.

I made a few phone calls to people I knew.  I had him sorted out.  We got him enrolled in a SAT prep class.

When he saw me at the boxing gym, he kept asking my shoe size.  I didn't know why.  I said, "Eight and a half to nine, depending on the make of the shoe."

The next day, he brought me a pair of black Adidas boxing shoes.  He said, "Hey Paul, try them on."  I untied the laces.  I put my foot in each one.  They fit snugly.

He smiled.  "Do they feel good?"  Christian asked.

He pressed on the tip of the shoe and felt for my toes, like parents do for their children.  "They're good, Paul."

I smiled back and said, "I guess you're right."

I trained in them that day.  But I had to go home early because of all the phone calls I was getting.  I can't believe I logged over 4,000 minutes of airtime on my cell phone last month!  That's almost three days of straight talking.

I came back to the gym, but Christian was gone.  Julian, the head boxing coach, asked me if I wanted to get some yogurt in downtown, Baldwin Park.  I said I did.

But as he drove me to the yogurt place I said, "Hey, we need to go back and get Christian.  He got me these boxing shoes."

So, Julian turned around and drove to get Christian.  Julian bought me my yogurt.  I had pomegranate.  Christian complained he didn't want to get fat, but he still overloaded his yogurt with all kinds of toppings: chocolates, and candies, and whatnot.  I bought Christian his yogurt.

We sat outside and enjoyed our dessert in the dying sunlight.  We spooned all of it from our cups, until it was gone.  I thanked Christian for the shoes.  He said it wasn't a problem.  Then, Julian dropped him home.

I told Julian, "I almost forgot to thank him because of all the craziness going on in my life.  But you know, what else could a kid give you?  I'm not rich, but I can afford my own boxing shoes.  But it's still a gift I can't buy myself."

"But for him - he gave me something from the heart.  His boxing shoes."

"It means a lot when another boxer gives you their old equipment."

That act of kindness gave me hope for the City of Baldwin Park.