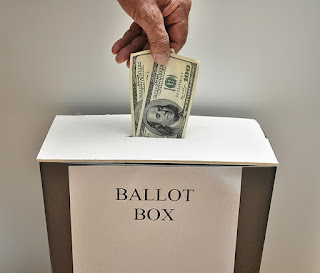 Donald Trump alleges that the Democrats robbed him of the popular vote because of voting fraud; major media outlets shot back: He has no evidence. Regardless of Trump's allegation, I was disappointed in the media's response.

Because it is their role to keep government accountable, which perhaps it thinks it is doing by questioning what evidence Trump has of voter fraud. But really, wouldn't the media serve us better by investigating whether voter fraud is fleecing the voters in our nation. In this way, the media would be safeguarding the foundation of our democracy.

According to a new Gallup Poll, the American trust in the media is sinking to new lows. I mean, I wouldn't be reporting on my blog, if the local and national media outlets were covering the scandals in Baldwin Park.

If voter fraud is happening, it means that each our vote doesn't count, because the person stuffing the ballots ultimately drown out our vote. And whoever controls ballot stuffing is basically unaccountable, because we can never vote him or her out.

I know that in Baldwin Park that voter fraud is rife. And I've been blogging about it. I've been telling the news agency, and nobody is reporting on it.

In Baldwin Park (and perhaps a lot of California), voting fraud has three parts. One, the cheating politician needs ghost identities. Two, cheated votes are done by mail. Three, the politician controls a the ghost list (or his consulting company does).

It's already been proven that in California that the dead are registered to vote. In Virginia, the Virginia Voter Alliance found at least 1,000 undocumented people registered to vote. So, the first part is that a consulting company or the cheating politician needs to maintain a registrar of ghost voters. In Baldwin Park, we've heard that some of these Council Members were paying the undocumented to register to vote outside of local Home Depot.

After the list is created, the cheating politician needs to calculate how many votes he or she needs to win an election. He has a number of the absentee votes mailed to a Post Office Box address. He collects them. Fills out the number he needs to win. He sends them back to the registrar's office.

To cover his trail, him or his consultant company gets the ghosts to re-register in another county. Then, the same scandal can take place in another city or county.

The circumstantial evidence in Baldwin Park's November 2015 election proves this. Let's look at the Mayor's results and all the Mayoral candidates. (The Mayor almost lost this election by the way.)

If there were 4,151 people that voted for a Mayor, then we should see 8,230 votes in total for the Council, because each person also can cast two votes for a council member. Instead, we see that there were only 6,669 votes for council, meaning 1,561 voters only voted for the Mayor and no one else.

I bet if you looked at the 1,561 votes, you would see that someone voted only for Mayor, that the vote was done by mail, and that nothing else was voted on. Why? Because, someone most likely collected all these absentees. One person filled them all out. Then, they were dropped back off at the registrar's office.

And how would the Mayor know how many votes he needed? If he had a friend at the registrar's office, he or she would tell him. Then, he'd make up the difference by filling out the number of ballots he needed to win. In this case, the Mayor won by 48 votes.

And why go through all this effort to do this? Well, as a friend once told me, you have to follow the money trail. And by my estimates, a lot of money is being fleeced from the taxpayer in Baldwin Park.

So, let's go back to Donald Trump. His biggest margin of loss came from the State of California. Is Baldwin Park in California? Yes. And, are other cities in California doing this? We know the City of Bell was. Hence, perhaps, losing the popular vote because of election fraud isn't that far fetched.
Posted by Paul C. at 3:24 PM