Captured by the Religious at an Ostrich Ranch

I regretted going with the Peruvian newlyweds to the Ostrich Ranch, near a beach. It was a mistake, because once they got me, they tried to convert me, and they tried really hard to convert me. I wouldn't have any of it.

At the hotel lobby, a Peruvian man approached me and asked if I wanted to go with him and his wife to a tourist site. I would have usually said, No, but because I thought it would be an opportunity for my Spanish to improve, I went with them.

They seemed happy and merry, in a way only newly weds could be. The wife spoke fluent English. The husband asked me if I was Korean. He spoke some Korean.

I find it interesting that so many people in Peru guess that I'm Korean and not Filipino. In the States, I always get asked if I'm Filipino. I've been asked if I was Columbian and Ecuadorian too. I guess I can pass for any race of a third world country and perhaps some first world ones too.

The husband was so proud of himself that he lived in Korea for three years. He told me all about it. They were also surprised I could speak and understand Spanish. I told them it was mandatory for me to learn in high school.

And I hated learning Spanish in my high school Sierra Vista, mainly because the Spanish teachers, Peterson and Ellis, were such terrible people. My Spanish teacher was Marilyn Ellis - and her daughter tragically died in a drunk driving accident while I went to school there. We genuinely all felt bad for her when it happened.

Unfortunately, she kept teaching instead of taking time off. And one time in class, a student, who was admittedly lazy, didn't do his work. She said in front of the whole class, "It should have been you that died - not my daughter."

She was a real nut. Her daughter was a law student at Pepperdine Law School when she died. I told her once I wanted to go to law school too. And she told me that I would never make it to a better law school than her daughter. (From what I know, UCLA was and is ranked a lot higher than Pepperdine, and I was the first one from Baldwin Park to ever attend UCLA Law. Oh yeah, by the way, the Ellis family came from wealth; she never told us though if it was old or new wealth.)

I'm writing this story, because this was the kind of education I received in Baldwin Park. I'm sure if a teacher told a student you should be dead in Beverly Hills High - some form of reprimand would be in order. But in short, Baldwin Park teachers were abusive to their students and kicked them down rather often to hold them in place from advancement. No wonder US News reported that Baldwin Park's education system ranks as some of the worst in California.

Back to Peru. They took me to an ostrich ranch. They were eager to eat there because they never ate ostrich meat. I told them that the meat would be red, like steak. Ostrich was more like beef than chicken.

When the food came out, it looked like a bloody steak. They also ordered an omelet, which was huge. They asked me to eat some. I said I would, but just a little.

I told them I had an ostrich omelet before. It was in Australia - when I was a university student doing fieldwork in the outback. We stayed on a cattle ranch, but they also owned an ostrich. The ranch cooked us up an ostrich egg omelet - which was the size of 25 chicken eggs.

I remember it being a bit too old, and I had diarrhea later from eating it. The best memory I have of that Australian ranch was when a flock of Apostle Birds descended on us. They're owls, but they're called Apostle Birds, because they come in twelves, like Jesus and his disciples. They were very amusing - and they watched us eat dinner over the campfire.

The Jehovah's Witnesses brought their own wine. Their "sister" made it. It was good, but it didn't taste commercial.

I made a toast. But they refused to clink their glasses. Then they told me they were Jehovah's Witnesses, because it was pagan in origin. (Note to self: Don't trust people who don't toast.)

Oh no, I thought. I wish I could run away. Why did I come with them?

Then they asked me to go to one of their services back in their hometown. The guy explained he was in Korea because he was studying the Bible there.

Then they gave me this big lecture on heaven.

And I thought to myself, Whatever they think heaven is, I don't want to be there.

I was hostage. And then I had to hear them talk about inner peace. And it was so boring to hear this talk.

They told me how inner peace was better than drinking and smoking and drugs.

So, I told them, "But God made tobacco."

"No, Paul, but that's all artificial. And it's temporary."

"It all grows naturally. When I was in Iquitos, I chewed on cocaine leaves. I didn't feel anything, but it grew from a tree.

"Also, if you do it every day, it's no longer temporary. Then why have inner peace?"

The lady didn't like that I was outarguing her, and doing it to spite them. I couldn't believe I fooled for it. They captured me.

Well - we then went on a tour of the ranch. Our guide was a young Hispanic guy. The lady asked him, "Are you Mexican?"

"Because you used a Mexican phrase."

I felt that his heart was beating faster and that his body language reflected nervousness. I could feel my heart beating faster too. She caught him, and she didn't even know it. (I think he was a fugitive too, but perhaps I'm just too imaginative.)

After, the guy wanted another omelet. Because there were clouds and the setting was designed for it, I took some self-portraits because the lighting was so different on the ranch. I wonder if Spielberg knew how to get this kind of lighting.

Afterwards, we went to a small beach nearby. There were a number of abandoned boats on the sand.

I took photos for them, because it was their honeymoon. They kept asking me to go to their religious meeting. I didn't want to go. And they weren't getting the point.

After the sun started setting, they took me back to the hotel. I was tired from being around them. So, I took a nap.

When I woke up, grandma was working at the hotel, so I started talking to her.

I told her, "I went to the ostrich ranch."

"Yeah." I showed her a few pictures of it on my iPhone. Then I said, "The couple took me. They're Jehovah's Witnesses."

"Oh, Jehoavh's Witnesses. They are?!" 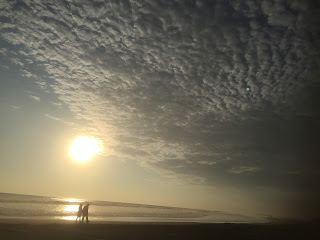 "Yeah, and they're crazy. They just keep talking about taking me to church. Why would I want to go to their church? Crazy is crazy."

"They just got married."

"But they're crazy. Because they just want me to go to their church. I don't want to go."

Anyways, I tried to reflect and think through all the signs of how to spot a Jehovah's Witness behaves, so that doesn't happen to me ever again. I wouldn't mind going with some normal, kind people to the ostrich ranch, but no more going with people who intend to convert me.

(And I probably wouldn't have been so annoyed with these Witnesses, had they not been so deceptively nice in the beginning. Their only intent (or at least it felt to me) was to convert me.)