We drove out of the darkness and came into the light, as we drove out of Nelspruit and headed North on our way to the Blyde River Canyon. I was in the worst mood, because I had an argument with the owner and a pathetic American guy the night before. I also slept badly. My mood brought down everyone else. And, because it was raining, the group was also gloomy. But as we started driving North, the weather and my spirits lifted. The grumpiness vanished with the sunlight.

About 30 minutes into the ride, that road-trip-feeling came over. Do you know what I'm talking about?

There was that sense of freedom and adventure and that sense of not caring about anything else in the world, except having a good time.

During the road trip, I told them my stories about taking a road trip with Volker in Germany from Goettingen to Hamburg to Berlin. The stories aren't appropriate to publish here, but we all had a good laugh in the car. (That was a crazy and fun trip, before my days of going to law school.)

When we arrived at our hostel, I wasn't going to start off on the wrong foot again with the owner.

She was French, so I went out and greeted her and said, "Bonjour Madame. Como ce va? Ce va bien?" (Good day, Madame. How are you? Are you good?)

And that was the limit of my French. But she was very friendly and told us she upgraded our rooms from a dormitory to a private cabin.

When I walked into it, man, it was amazing. There was even a kitchen and our own restroom.

I told the group, "We have to have a braai. It's a South African barbecue."

We drove about 20 minutes away and stopped at a pub for lunch and drinks. It was so hot, I took off my shirt and the guys followed. It was just so nice to do nothing and be in the sun and to eat and drink. 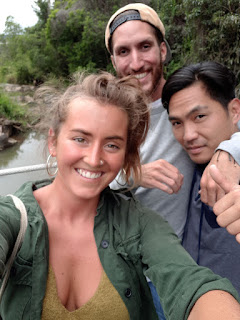 Then we had to drive further to the supermarket. There, we got food for our BBQ, which included salad, avocados, sausages, pita bread, and Greek cream sauce.

But there was a big problem. In Hoedspruit, where we were, there alcohol wasn't sold on Sundays. And they wanted beer. I wanted red wine. And, so, we drove up and down for hours all over the towns looking to buy alcohol.

At one point, we even stopped to ask some local ladies if they knew. They didn't, and we laughed, because I said, "They must think we're crazy."

I finally pointed them to a local hotel next door to our place. And inside was a collection of classic cars. I fell in love with two, a 1920's Mercedes Benz and an old Porsche. There was also a beautiful Russian blue cat, which reminded me of my blue Siamese, Jeh Pan, except this cat had green eyes instead of his icy blue ones.

At the gift store, there was wine! And we bought two bottles, even though it was bit marked up. We were so happy and commented about how we searched everywhere, and in the end, the wine was just next door to us.

After, we drove away, I showed the bottles of wine to people and cars passing us. They must have thought we were crazy. 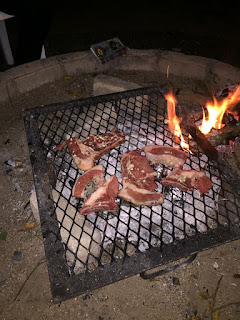 Melissa said we didn't do anything, except drive, eat and go to the supermarket. So, we drove out into the street and parked on the side of the highway. Oliver pumped up the music. And we just watched the sun set behind the mountains. The sky turned a bright red color. Again, the cars passing us thought we were crazy. One truck thought we were trying to hijack him, and he sped passed us at what seemed to be 160km an hour (100 mph).

After, we found some dry wood and started our fire for the braai. We grilled the food in the fire, ate crackers while waiting, and drank red wine.

The roasted Afrikaner sausage was magnificent. It tasted smokey and salty and yummy. We cut it up, put it in the pita bread with the salad and sauce. And it was so yummy. It went well with the wine. The only problem was we needed one more bottle of wine, which was already all gone.

After eating, we looked up at the sky and saw all the scattered stars. There were so many bluish-white lights up there; it was extraordinary. Being alone in the African wilderness, underneath the heavens - which went beyond anyone's imagination - really made you feel small and tiny in comparison to the universe.

I also made jokes about people, and we all started laughing. We told stories. I told them the story about how I met the wiseman of the mountains. And around 11:00P, we went to bed. That was our first day in the Blyde River area. 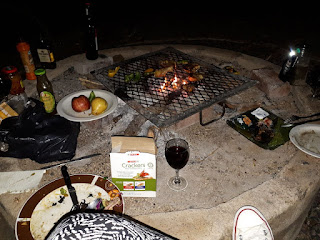