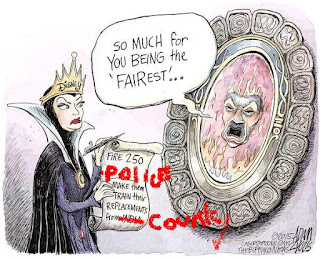 It looks like the City of Baldwin Park will begin negotiations in outsourcing the police services to LA County Sheriffs. The evidence that points to this is the fact that the City paid off their $53.7 million CalPERS loan with another loan, a municipal bond in this case. As of March 7, 2019, a public records act request has confirmed that Baldwin Park doesn't have outstanding CalPERS liability. Therefore, this puts the dissolution of Baldwin Park's police back on the table.

Why do this? Because amongst other reasons, the Sheriffs didn't want to take on Baldwin Park with such a high pension liability. It was a risk, but why it concerned the LA County Sheriffs so much is not clear.

This first attempt started around October 4, 2012. Mayor Manuel Lozano and Council Members Marlen Garcia were pushing to outsource these services to the Sheriff. But the outsourcing failed around December of 2013. Besides the protests and the ousting of Garcia, the Sheriffs were uncomfortable with the rising pension costs of the police.

Besides $51 million in employees' pension debt, Baldwin Park's Police Department costs the City $21.8 million. Of the entire $31.15 million operation budget, the police make up 70% of the budget.

According to the economist Martin Armstrong, the death knell for the Roman Empire happened because Rome could no longer afford to pay its military pensions. The generals then revolted.

Likewise, back in 2012 - the police funded a campaign to get rid of Marlen Garcia. Her political career ended because of her vocal protest of the police.

I predict that the same will happen again when the police department's fate comes on the table for discussion.

The 2019-2020 budget is interesting, because the Finance Director Rose Tam says that $3.85 million in revenue.

Does that mean the City will no longer be funding CalPERS and be co-mingling the employees' pension fund with their general fund?

Or is this an accounting trick, in which savings are now calculated as a revenue?

I emailed her asking what all this is about. She refuses to say.

Well, since the $53.7 million debt has been transferred from employees' pensions to municipal bonds, the City will have an easier time filing for bankruptcy. California law makes it difficult for public agencies to file bankruptcy on pensions. So the risk has now been pushed to the bond holders.

Well, Nicholas Machivelli once said: "“It ought to be remembered that there is nothing more difficult to take in hand, more perilous to conduct, or more uncertain in its success, than to take the lead in the introduction of a new order of things."

Is there a solution? For certain, the police force budget has to be cut. It's unsustainable at this growing rate.

Nonetheless, I don't believe sheriffs is the solution with their dreadful response time and their currently corrupt Sheriff, Alex Villanueva.

Furthermore, we need to remember - this City has been in a mess with current political regime with Manuel Lozano at the helm. Besides getting rid of the corrupt, changes within the city's ordinance to prevent corruption and ensure better governance and transparency need to be enacted.

For now, one thing is clear. It looks like Baldwin Park's bonds are lot riskier than being presented. I recommend you don't buy them.