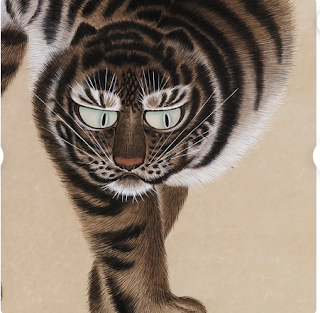 Last year, I stated that the ox represents hard work, and that "I'll make sure to work hard and be loyal to cause of Truth and love in hopes of a great harvest to come.". I think I lived up to this. But I had no idea the work would come in taking care of family.

I can't tell you how difficult this year has been, but it ended well and victorious. And a harvest did come.

As you probably all have noticed, I haven't been writing as much. Part of it is that the court wasn't too happy that I was blogging about my cases. Another part was that I had a lot of family emergencies this year.

Actually, even our cat ended up in the emergency room, right before my mother - which was probably the foreshadowing of everything to come. And while that was happening, I was in heavy litigation against the City of Baldwin Park, West Valley Water District, and the Baldwin Park Unified School District.

Everybody is healthy and well now, even Jeh Pan, our cat. It did take a toll on me though. The stress was incredible. I can't even tell you how I managed everything, still kept a stiff upper lip in litigation, and made sure everyone was healed and restored. I don't know.

I can only say the Lord was with me to give me the strength and wisdom required and the love to endure. I gained 10 pounds in those 11 months from stress, and in these last two weeks, I've lost 10 pounds. So, it all worked out.

We ended up winning this case. The School District was illegally ticketing people outside of its area (or jurisdiction in legalise). They were even ticketing people outside of this City, in West Covina! All in all, the court agreed with us, that this was illegal. It's a shameful school district that's failing the students here, keeping them trapped in poverty by a lack of education.

In the end, I won an amount of attorney's fees, and I donated it to my non-profit. You can read all about it here. I've heard from a major newspaper that they want to write the story.

The City of Baldwin Park

This case, I lost. This was a public records act case, in which the City never released records. My client and I even had video evidence that they didn't release all the records. Then, right before trial, the City submitted a declaration that they released everything and the trial court agreed.

This was totally false on the City's part, and it's been frustrating dealing with players who make misrepresentations just to win, and those who need to hold them accountable do nothing about it. Take for instance how attorney Maribel Medina and Tam filed a restraining order against me, alleging I rammed into Tam's car, and wrote emails to her that I love her. (There's no evidence of this.) They lost the restraining order part of the case, but do they get disciplined for it? No.

I reported Medina to the bar. And that got dismissed too. I'm not surprised. This was like when the city attorney misrepresented my signature, and I reported him. And nothing happened.

I'm realizing more and more, the government can get away with misconduct we can't - like lying, violence, and stealing. (More on this in a later series.)

Well, if you know anything, the City officials and administrators are under federal investigation. I've been telling you guys for years that they're corrupt - and now - it's being proven. And part of the records the City refuse to release regards how they cashed in and spent revenue from cannabis distribution licenses.

In any event, I have appealed the case. I've received two amici letters in support so far. I hope that things go better in this case for next year.

In another records case, in which the City Attorney of Baldwin Park represents, West Valley Water District refuses to release its credit card statements. Like in the Baldwin Park case, they're saying they released everything, when they clearly haven't. So, I went to the Bank and asked for it. That's when I got the kicking and screaming from Robert Tafoya, General Counsel on the case. Part of this case went on appeal too. Everything is pending. Let's see what happens.

Thoughts for next year

2020 and 2021 has been hard for the majority of us. It's been one dark and long winter, in which our country is still semi-locked down, restricted, and in disagreement about vaccine passports. From the information I have, and what I see, I think this entire affair will continue until the summer of 2023. I don't want to focus my writing on a general bleak prediction regarding our economy and Covid. Instead, I wanted to focus on a talk that really made made me think.

I was listening to talk by Warren Buffet on investing. If you don't know who he is, look him up, and you'll see that he's one of the richest people alive, and arguably in human history. And he said this, he said that if you only had 20 investment choices in your life - you would be picking stocks differently.

That made me realize why he's rich. It's because he thinks differently than 99% of everybody

Then it made me realize something else, especially because I was running 7-9 miles a day, and dieting. There were a few days, I could only think about food. I thought about roasted bone marrow on toast and tacos and Italian pizza cooked in a wood fire oven with truffle shavings. And I realized, how I needed to get my thinking under control.

But I asked myself, what if you could only eat 20 dishes? What would you choose? I'll tell you, items in my freezer didn't make the list. So, I started wondering - why did I buy it?

What if you could only have 20 pieces of clothes? What would they be?

What if you could only have 20 items in total, including your car? How would you treat those items? What would you buy?

What if you could only have 20 business decisions, including the cases you picked?

What if you could only have 20 friends? Who would they be?

What if you only had 20 things to say? What would you say?

What if in total, you only had 20 important decisions from birth to death? What would you do?

From the cases I picked, I'm glad that my business advisor Tuttle told me to take on the school district case. I actually didn't want to, but he convinced me after a lot of argument. It'll be one of the cases that defined the middle part of my career. That was a good one in the bundle of 20.

From a family perspective, I'm glad I chose to be there for my cat, for my mother, and for my father. That was important. And it made me realize, life is short.

I wonder how many decisions I have left in total. I wonder what I should do. But I think the questions make you realize, don't spend your time on useless things, when you only have a limited amount of money and time spend in a lifetime.

This year, one Bible verse struck me to try to live by. It says, "Try to be at peace with everyone, and try to live a holy life, because no one will see the Lord without it." Hebrews 12:14. (GNT).

I don't know what next year's verse is. I'll tell you when I know.

I had two books that changed my life this year. I'll write more on both of them. Cured by Jeffrey Rediger and The Kingdom of God is Within You by Leo Tolstoy.

To end, I want to say, the tiger has all kinds of meanings in Asian mythology. It can be both protection and danger. So, it's uncertain. But generally, tigers cross water, because they're on the go. And I think, this will be a year of uncertain transition for everyone.

Happy New Year. Out with the old. And in with the new. I welcome the Year of 2022 - the Year of the Water Tiger.