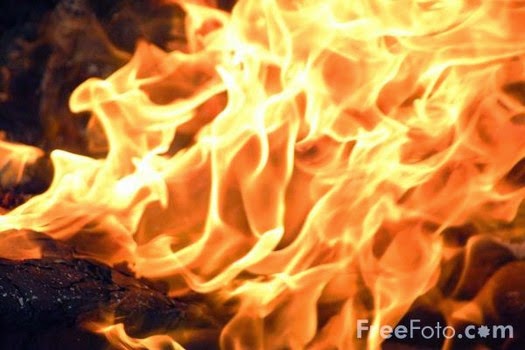 A Hispanic male, shaved head, 40, shirtless, tattooed up, with a dirty Sanchez mustache knocked on my window at 11pm.  I was in my pajamas, on the phone, when I thought: What the hell is happening?

He said, "Help me!  Help me!"  He looked terrified, like an animal was hunting after him.

I dial 911 on my cellphone.  I walk to the living room, where my mother was watching television.  I wanted to make sure he didn't come through the backdoor.

He ran to the backyard wall.  He climbed the wall.  And he fled South.

And in five minutes, a Baldwin Park Police Officer was at my door.

He said, "There's a fire at the end of your block."

I walked outside to see three firetrucks, about 15 firefighters, and three police officers.  One of the officers greeted me and said, "Mr. Cook, I just saw you a few hours ago."  I was at a protest earlier that day, making sure that the peace would be kept with a group of lawyers.

I said, "I guess you just can't get enough of me."

The abandoned house was charred.  It had a large burnt hole right through the roof.

I had a suspicion that my neighbors were involved.  The 17 year old has stopped going to school.  He was hanging out in the abandoned house everyday, doing drugs, smoking, and drinking.  In fact, I think I've seen that arsonist before hanging out with those neighbors.

My mom said, "Maybe we should get a dog."  I was happy to hear this.  I want a rottweiler, which I would train to be the most vicious creature to others and kind to my family and friends.  Of course, she'd have to take care of it.

Before sleep, in bed, I remember thinking, Why does this stuff always happen to me?
Posted by Paul C. at 12:23 PM