[Well, my client's case (and the Boxing Lawyer) made it on the front pageof City on La Opinion today.  It made it as the internet cover story for some time.

You read it here first.  Local governments are running out of money.  Under pressure to fill their coffers, and some times even the pockets of public officials and administrators, cities are taking property from the common citizen.  For several years, I worked on how the City of Los Angeles and several other cities took personal property from Latino immigrants: mainly their cars.  Now, it looks like the City of Los Angeles wants real property.  Read more.]


"Owning a mechanic garage has always been my American Dream, but the City of Los Angeles has turned my dream into a nightmare," said Mr. Gonzalez. 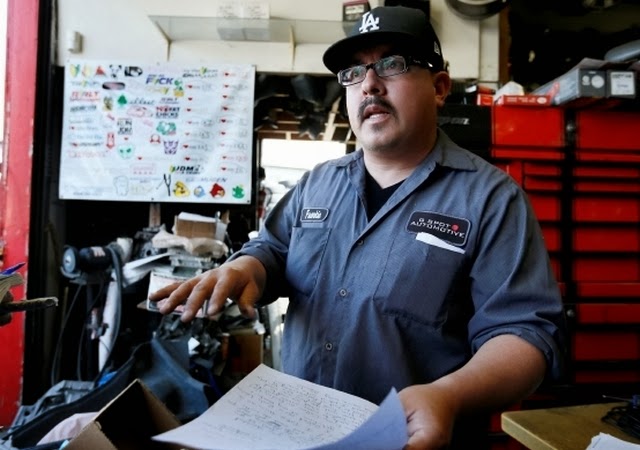 Francisco Gonzalez said that the city of Los Angeles is hounding him to sell his land, which it needs for a construction project in Lincoln Heights.

A mechanic in Lincoln Heights is certain that the City of Los Angeles has harassed him for seven years because he does not want to sell the City his property, which interferes with a road project.

It involves an outdated scheme, which erected a bridge on Soto Street, in order to improve traffic flow for the communities of El Sereno, Boyle Heights and Lincoln Heights.  Now, in its place, at the intersection of Soto St. and Mission Road, the City wants to put in traffic lights and a garden.  The work's been already undertaken, despite the fact that the city has not purchased all the property it needs, such as the mechanic garage of Francisco Gonzalez, where it plans to replace his shop with an access street.  At first, the City wanted only 9% of the lot, but it is now interested in the whole plot.

"Since we started the business [in 2007], we've been inspected certain times of the year, and the detectives, have made at least 25 inspections," says Gonzalez, who alleges that during this time, the city has not visited other workshops in the area.

The mechanic stated that during every Los Angeles Police Department (LAPD) search by detectives, they look for stolen car parts or any technicality, something that he considers to be a part of the plot to persecute him. "Because while I'm here, the City is setback, which costs them lots of money," he stated.

His lawyer, Paul Cook, stated that these searches were illegal because they were conducted without search warrants. "The City is doing all this because they want his property; it is ridiculous," said the lawyer.

Gonzales served a demand against the City Hall to prevent it from acquiring his place by state power or below the market value.  Although he's been offered $200,000, he claims that similar types of businesses in the area are worth at least one million dollars.

The city attorney declined to comment until the issue was resolved.

According to the Department of Public Works, who oversees the project, the costs are estimated to be more than $13 million to demolish the Soto Street Bridge, which was built in 1936, but that it is necessary to enhance public safety and expedite traffic and beautify the area.

This week, a few steps away from the workshop of Gonzalez, a team of builders were initiating the demolition of the overpass.  "Another improvement for your convenience and safety," the sign indicated.

Gonzalez said that two weeks ago, an engineer entered his property to paint an "X" in his parking lot, and explained to him that where the X was, a bench seat was going to be built.  "He told me that I needed to get all things out of the area, and that they were going to remove my fence, which cost me $20,000," he said.

"Owning a mechanic garage has always been my American Dream, but the City of Los Angeles has turned my dream into a nightmare," said Mr. Gonzalez.

[The original article can be read in Spanish here:
http://www.laopinion.com/mecanico-acoso-inspecciones-proyecto-ayuntamiento ].