The early Amazonian light woke me, and all last night's worries now seemed vanquished and vanished. I woke and asked Jose for coffee. Something I never have to ask for at home, because my lovely mother knows, and the Blue Mountain is brewing before I wake up.

I want to go for a morning swim. My guide says, "Don't go too far. There's anacondas in the water."

"Where are these anacondas? I want to see them."

Then I go for a morning swim in the black water. The temperature of the water varies. Some spots are warm. Some spots are lukewarm. There are multiple thermoclines in the rivers.

When I finish my morning swim, I crawl back up the slippery clay mud bank. My guide has my coffee ready with milk in it. He hands me my coffee and a banana. That's my breakfast. (Before the tour, I told my guide that I didn't eat breakfast.)

After my coffee, we take a three hour jungle walk. I put on my boots.

On our walk, my guide spots a tree that the Indians use for face paint. I told him to put it on me. It was red and sticky resin. I let him touch my face. It reminded me when the boxing coach, Luis used to put Vaseline on my face before a spar. 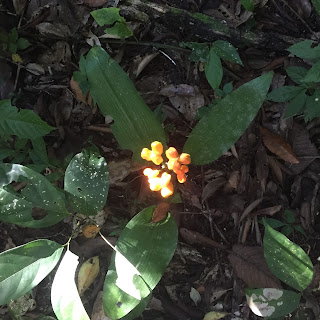 My guide finds a leaf frog on the Amazon floor. It's so well camouflaged; I didn't spot it. (I find out later that my guide is really good at spotting frogs, for some reason. I tend to be better at spotting birds.)

My guide introduces me to exotic plants, like a plant with leaves that has sharp razor textures on it. He calls it "knife plant."

We find one monkey. There's also a paw print of a jaguar, but no jaguar. (I make a note to myself, find a jaguar next.)

I find some of the flowers to be beautiful. But on this walk, all in all, we didn't find that much.

On our way back to camp, I spotted a beautiful white and exotic insect. It was only an inch or less. The patterns reminded me of the design of an Italian designer shirt. Jose explains to me it's a juvenile cicada, which are semi-difficult to spot. He says when they get older, they'll turn green. This was certainly a big find for me, and it was bigger, because the cicada didn't fly away when I shot a photo of it. (Of course, tourists want to see the big and large and ferocious animals. But some times, beauty and surprise can pass us by, unless one stops and pays attention.)

After walking for three hours, we get back to camp and we're both hungry. Jose tells me to
wash my paint and get the paint off. So, I take some soap and wash my face in the black water. But it doesn't come off. The resin is oily and sticky.

I don't care much. Instead, I take another swim in the black water. After, I put more mud clay on my face and skin.

Jose is cooking a catfish stew. It takes awhile. So, I begin reading Hemingway's Dangerous Summer, one of his later works about bullfighters in Spain. Jose notes that I read when I'm bored.

We eat. It's a satisfying meal, especially because we're both hungry and had not had breakfast. After, I throw the remains into the water's shore. Exotic tropical fish, I have never seen, come and eat it. Jose identifies a few, but a number of them, we both don't know what they are.

I take some eucalyptus oil from my bag and use it to take the paint off my face. It works well, but not completely. It leaves my face partly stained orangish-yellow. But I don't care much about it.

After, we load our stuff onto the boat. Jose smokes a cigarette on the boat. He picks up my book. He looks through the pages and the pictures.

I ask him if he knows who Hemingway is.

He says he does not.

I tell him the book is about bullfighting in Spain. I ask him, "Have you ever seen a bullfight?"

"What are we going to do next?"

He drives the boat to the junction of the main river. While he drives the boat, I noticed reddish-orange butterfly land near our bag of food. The colors of its wings were so brilliant that the photo doesn't really do it so much justice. I had never seen a color like it in my life.

Had King Solomon with all his wealth saw this butterfly, he would have asked all of his servants and craftsmen to create a fabric of this color. And had Queen Sheba seen it, she would have tested Solomon's wisdom by asking him to make her a cloth of the same color and brilliance. What would they do both, though, when they realized that such a fabric couldn't be created by any man?

Jose parks the boat to the edge of the river. I see fish skipping over the water, creating a fury and a flutter and a spray of water. It looked like oil splattering on a hot and greasy pan. And when I saw them, I knew what we were looking at.

Jose catches me one. I'm excited.

I've never seen angelfish in the wild. And these were extraordinary and playful and amusing. Angelfish are usually docile and tranquil. That's why people like keeping them in the aquarium. They're a calming fish, and studies have shown they can bring down blood pressure and relieve stress just by watching them.

(Some people understand why I like fish so much. I always have as a kid.

During my undergrad, my understanding of them helped me appreciate them even more. Under the mentorship of William Hamner at UCLA, I learned about the different types of swimming styles each fish have.

For instance, tuna swim like torpedoes in the water. Certain fish can swim backwards and others can't. Under Ian Tibbetts, in Queensland Australia, I learned more about how a gobies, small ocean floor fish, had an acrobatic swimming style, that allowed it to bite the flesh of animals and twist and turn and pull to rip a chunk of that flesh off.

So, I'm still learning quite about fish, especially every time I watch my aquarium. It seems in recent years, I've become more interested in biomechanics and the personality of fish.)

Going back to our angelfish capture, these angelfish were different. They came out of the water and made themselves known to you. It looked like they were actually dancing on the water. It was a pleasure to watch them and catch them and study them.

I've had angelfish as pets, since I was in elementary school. I thought about how strange it was that these angelfish made it to Los Angeles in my aquarium. And now they brought me out of Los Angeles in to the Amazon to meet their true and natural and original kind. They were certainly stronger and healthier and hardier than the inbred type found in pet stores. I knew then, that what might seem like the small find of a school of angelfish would be the highlight of this trip.

After, and for most of the afternoon, we drove onward to do bird watching. The highlights there was seeing a few eagles and a shriek of macaws. Apparently, the macaws are hard to spot.

Around dusk, we went to a lagoon to see caymans, a relative of the alligator or crocodile. During the ride, I asked Jose, "Have you ever been to Brazil?"

"Do you know if there's a checkpoint at the border between Peru and Brazil on the river?"

"Do you know about Pablo Escobar?"

"Have you ever been to Colombia?'

"I want to go to Brazil, but I don't want to pay for a visa. Do you know how to go illegally?"

During that transition between day and night, a swarm of mosquitos started waking. They looked like a black cloud. I never seen so may mosquitoes in my life. I wonder if this what it looked like when Moses sent down a plague of gnats in Egypt.

And, they were hungry for blood and they attacked and I had no repellant. And it hurt and was painful and it was frequent.

I told Jose we could leave. We saw the caymans in the distance, but it wasn't worth enduring the swarms of mosquitos.

Jose drove to a sand beach in the Amazon. It was later in the evening, around 09:00PM. That was good, because I wouldn't have to be alone with my thoughts too long this evening.

For dinner, he made catfish stew again with boiled plantains. I wish I bought red wine at Iquitos for this trip. I also wish I brought my fresh coffee, which just sits in my luggage now.

He asked me to teach him some Korean. I told him it was hard. But he insisted.

I asked him if he had Korean tourists before. He said two girls. So, now he wanted to learn Korean.

That night, the sky war clear and the vast open space in the heavens were scattered with an infinite number of stars. It was nice to see so many twinkling lights of white and bluish white and blue.

I saw two shooting stars in a row. They looked like the blue amazon fireflies that light up and fly around and then die, only to pop up somewhere else later.

It reminded me of Blake's poem The Tyger. "When the stars threw down their spears, / And water'd heaven with their tears. / Did he smile his work to see? / Did he who made the Lamb make thee."

I made two wishes. The first one was that the pain of the past wouldn't affect me anymore. The second one was for direction in my future when I come home, if I ever come home.

Some Christians might say that it was superstitious for me to do such a thing. Well, perhaps I'm not wishing on a star, but rather praying on one. I didn't stay up too long thinking. I fell asleep rather soon that night.

That night I thought about meeting new people on this trip and how I don't feel very excited to meet them. I thought to myself, I'd rather just get back everyone I lost.