Learning to Surf in Peru 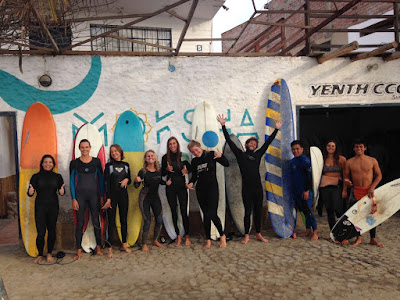 My first surf lesson was awful; it really was. I instantly knew it was going to be bad when I met my instructor - who also has a reputation for being a creep in town. I stood up on the board, but the problem was I didn't feel like I learned anything or had control in the water.

But one day at the hostel, I met a girl from San Diego, California named Jennifer. She surfed all the time. She told me that she taught the little girls to surf here.

I asked her to teach me. I told her the bad experience I had. She felt bad for me.

She said, "Surfing is one of those things that should be taught for free. We're going to go out. I want you to enjoy the water."

She added later, "Don't worry. I have a one hundred percent standing rate."

On a sunny afternoon day, we walked to the beach together. Even though she was the girl, she insisted on carrying my board, because she was the teacher. She didn't bring a board.

On the beach, we stretched. It was like doing yoga on the beach, though I've never done yoga. The people on the malecon were watching us from above. It looked like they never saw a girl teach a guy how to surf.

In this town, the surf guys have an association that is a monopoly. You can't make money off of surfing or renting surf gear without their permission. We call them the "surf mafia." But, because surfing is such a macho sport here, the men teach it, run it, and own it, no one sees a woman surf instructor teaching a guy.

So back to yoga stretches. The women watching us seemed like they wanted to join us and do yoga on the beach. We did a lot of squats and stretched our legs out a lot. I felt like we were like zen masters on the beach.

Then Jenn drew a surfboard on the sand, an imaginary surfboard. We practiced what she called "Ninja hops" onto the board. After a few jumps, she said I had it down. The people were still watching us from above.

We paddled into the water. Jenn swam next to me like a seal, shouting commands about where I should place my body.

Every time a wave came, she would say, "Push up!" My board and body would brace the wave without being pushed back so hard. She was attentive.

Whenever I made a mistake, she would say things like, "Remember to push up." "Paddle." "Feet together."

After getting some of the basics, Jenn pushed me into a wave. I stood up, but it was only a half stand.

After paddling back out there, Jenn pushed me into a second wave. I popped up like a ninja. I stood up on the board. It was awesome.

Jenn wanted me to do another one. I told her, "Let's end on a good memory, so I want to go back out."

While walking back, I told her, "I felt pressure. I didn't want to ruin your one hundred percent stand rate."

She gave me a high five and said, "But you did it. I felt pressure too. Everyone was watching me teach you."

We walked back. I was smiling when we got back. Jorge, the guy who runs the surf rental shop, saw me smiling. He asked, "Was she a good teacher?"

Well, I told everyone in a hostel what a great time I had and how Jenn was a fantastic teacher. She really was.

* * *
Next week, Jenn was going to take me out again. People wanted to join us. So, this time, a number of us all went out together to surf in a Peruvian beach underneath the sunset sky. The sky was washed in colors of pink and orange.

It was fun to go out in a big group.

When Jenn did the yoga lessons for the whole group, she drew a crowd - who all wanted to know what was going on. The girls say they didn't enjoy the attention. I don't believe it.

Jenn was like a little seal again, paddling around the beginners and shouting instructors. We had more advanced surfers too - who were also able to give attention.

On this round, I stood up twice on the board. The people saw. We all had a good time. 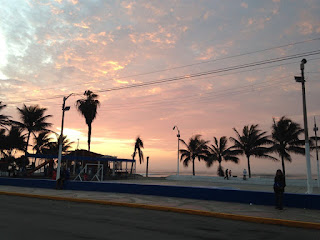