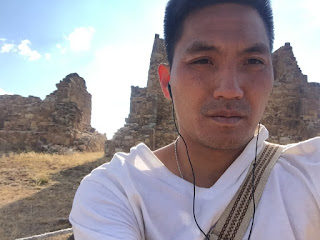 At 3,600 meters, which is 60% of Everest Base Camp, I was walking through ancient ruins, part of which was a stone fortress that was at least 1,500 years old. But being at that height, I was having difficulty breathing. Also, I had just finished walking 11 miles (16 km), and I was really tired and thirsty and had no water left. The scorching heat of the sun burnt my cheeks a cherry red, and I felt miserable at the top of those ruins.

From Cajamarca, the largest City in the Northern Andes of Peru, I made my way to a small town called Huamachuco. The French couple I met marked it on my map, and told me to visit the ruins of there. (Huamachuco had really good fried chicken, and I had my own room with internet and hot water there for only 20 soles, which is $6 USD).

On the day I went to the ruins, I slept in; also, there weren't many tourists. Thus, I had to walk to the ruins, which was 10 km to the base of the mountain and then another 11 km all the way up. It was hot. I didn't bring enough water. It reminded me of the time I almost died in a Turkish desert, in the summer of 2014, right after the Director of Recreation fired Julian, who worked for him for 21 years. Almost Dying (Again) in Turkey. Except, this time, I just could feel my extreme need for water. When I was dying, my mind was really starting to play mind tricks on me for water. (Not fun.)

I arrived at the ruins around 05:00PM. I was tired. The ruins were at the top of the crest. It's built on a plain, and it's really windy up there. Scholars guess the functions of the ruins was either a place to see an oracle - someone who could see into the future. Others, guess it was a fortress. The ruins looked like this to me.

I wished I was with friends. Since it's not so popular, I reckon we could've camped inside the ruins. And that
would be a good story to have.

Even though I was tired, the entire ruins seems to have encompassed probably a 4 mile walk. I did it. And I was more tired, after and more thirsty.

But the ruins were vast and enormous and open and intact. It was amazing to see, which I couldn't say about the tourist trap of Kuelap. Seeing Kuelap with Tobi

I finally found a security guard before I left at sunset. He let me fill up my bottle. I drank a lot. Filled up more. Drank more. Filled up more. The whole ordeal made me wonder how camels do it.

The guard told me there was no more rides back into town, but he showed me a foot trail that was a shortcut. It was much easier to go down, of course than up.

Then at a cross road, three miles away from town, I hitched a ride back with a pickup truck. I sat at the back of the bed, and I could give my legs a rest.


I thanked my driver. That night, I ate a nice fried chicken with some red wine. I told the locals that I was getting to know - "I saw Marcahuamachuco."