The Magical Trip to the Tropic of Capricorn

I told Monse, "I'm going to the West Cape this morning."

She said, "Arturo [the baker] is making a delivery there. Ask him to take you."

I texted Arturo - who said he'd take me. I packed my stuff. The baker picked me up. He took me to his bakery.

I was tired. I didn't have time to make a coffee. So, I drank two plunger coffees at Arturo's.

Later, a girl named Vanessa joined us for the ride. She brews her own Kombucha (fermented tea) and sells it locally.

And off we were on the toll road to the West Cape.

On the road to the West Cape, we saw these sea eagles soaring freely. It was then, Art told me that eagles were his spirit animal.

He asked if I had one. We were taking a desert road to the Pacific Ocean, where the cacti grow in the red and gold sands. The jagged rocks have aggressive, weathered, and mean character.

Vultures circle in the sky above. And on the ground, there are tons of huge jack rabbits.

There was sudden point in the trip, where the temperature dropped, and I felt cold. Uh oh, I thought. I didn't bring a jacket.

I've never hit a thermocline of air. It was like hitting a literal wall of cold. One side was hot, the other chilly.

Arturo said, "We've arrived at the Tropic of Capricorn. We are exactly at that point."

And from the horizon, hilly beaches and the roaring ocean came into view. It became dark and cloudy and misty. Arturo then pointed to the ocean and said, "That's the Pacific."

I followed them on their deliveries. At one cafe, there was a dog so huge, it was like the dog that Clara had in Isabel Allende's House of Spirits.

I told people it was half dog and half horse.

While I stood around, the dog came to me and started licking my hand. I petted him. He was so huge. (People are always saying our cat back home is huge, but it couldn't compare to this gentle beast.)

After, I bought Arturo some carnitas tacos (pork shoulder tacos), which were really good. (Though the next day, when we went back, they didn't taste as good.) Art lent me his jacket, because I was underprepared. That was kind of him. And we ate and enjoyed the food, until my friend Ed joined us.

Art and Vanessa knew Ed, because everybody that's part of the community knows Ed. I told Art, "It's a small world."

He responded, "Yes, but a big community."

Art handed me off to Ed, an old friend and acupuncturist. (I've known Ed now for 6 years. How time flies.) Then, Art and Vanessa rode off on the long road back to the Sea of Cortes.

Ed wanted me to meet a local Mexican-American activist lady down there named Olivier. She was having problems with the government down there not taking care of waste. But they were collecting taxes for it.

So we went back, and the dog came back to me. And I petted it. I was happy.

Then, Ed took me back to his place, where I met the people who were renting from. They were an expat family from Santa Cruz. They liked to eat bbq meat and drink beer. They were hippies at heart. 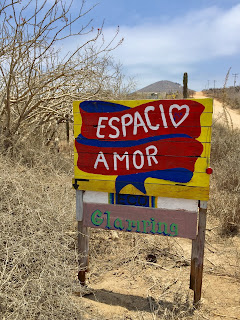 After I settled in, Ed said let's go see Aieda - a hippie at heart. She lives on wild property called, "Espacio Amor."

I told Ed, I needed to take a picture of the sign, because I have too many friends back home with their panties all bunched up.

Aieda came out of her trailer. She looked like a psychic gypsy to me and spoke with a strong and heavy and attractive accent.

I told her, "This place looks wild."

And then she said, "What is wild to you?"

I laughed and said, "That sounds exactly like a question a gypsy would ask."

And then she laughed too.

After introducing ourselves, she told me she was writing a children's book about a white wizard that was on a journey from a cold mountain to an exotic, hot place. On the journey, a white wolf follows him on one side; and a black wolf, on the other side. The wizard has to choose when to feed one at the expense of the other.

After telling more stories, we go back to Ed's - where Ed and I cook dinner for a small group. Night falls, and the sky transitions from a light blue into fiery colors of sunset into a midnight blue. The moon and stars rise. We cook dinner and go back to Espacio Amor and find Aieda with her handyman, Sergio and two Germans. Later, Olivier join us too.

Over a campfire, we eat dinner and drink wine. Around the bright and hot fire, we tell stories to each other. The Germans talk about how they are doing an exchange program in Mexico City. They find it a culture shock that all the university students there are filthy rich and don't have to study. (Is it any different in America after our recent admission scandal?)

After we get tired from our conversations, we call it a night. I told them that I'll bring coffee for everyone tomorrow morning.
Posted by Paul C. at 2:22 PM