Boxers Win Trial Against the Corrupt City of Baldwin Park 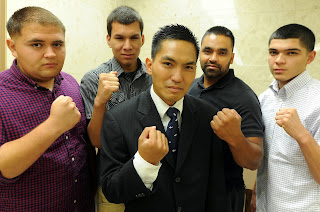 Yesterday, the Boxing Lawyer knocked out the City Attorney of Baldwin Park. The stubborn attorney had to be knocked down twice, actually. He finally stayed out for the count of ten after his second knock down by Judge Chalfant.

Upon arriving into court chambers, Judge Chalfant issued a tentative ruling that declared that the Boxing Lawyer had tentatively won his petition. In simple English that means that the Judge was going to order the City to release the records to Julian and I. It's just really embarrassing to have a judge tell the City that it misbehaved, and that the corrupt little city was wrong.

As Tofu, (short for Tafoya) read the tentative opinion, he looked like he was about to barf. He asked the clerk if he could walk outside to use the restroom, but we all suspected he made a phone call to someone. He also brought his junior attorney with him this time. I wonder if the City has to pick up the tab on that one.

When the judge finally called our case, the judge told Tofu to release the records to us.

He said, "Well - your Honor they've been ready since last year." That was a big, fat lie.

Anyways, I figured this guy's strategy out. Since he can't win on the facts that applies to law, he just lies, meaning, he just makes up new facts, hoping the judge will buy it. This judge didn't buy it. (Yes, a few records were ready last year, but not all of them. And Judge saw through it and said just that.)

Getting back to Tofu's comment, I replied, "Your Honor, I'll be ready to inspect them next week."

The Judge said, "Good. Anything else?"

Then City Attorney had to answer his mouth. It would've been better if he just kept it shut. But he said, "Is Petitioner the prevailing party?" In simple English he asked, "Did I lose?"

The Judge said, "Looks like to me, obviously the Petitioner is the [winner]." And then he told him to pay my attorney's fees. That was the second knock out for Tofu, and that one, finally after all these rounds of defeat kept him down for the count of 10.

I mean the question was stupid on a number of levels. It made Tofu look self-interested in being the winner or loser, instead of caring about his clients. It made him look like he didn't read the tentative ruling. And most of all, it made him look like he didn't understand that his defense wasn't a legal defense at all, meaning it looked like he didn't know the law. And as I've been telling people - Baldwin Park is in lala land, thinking it could make up it's own law. Hello - we are in the United States, after all! American law applies. It was just so embarrassing (for Tofu of course).

Tofu said, "Well - your Honor, we produced the documents, and Mr. Cook didn't want to view them until September 9th."

I said, "Your Honor, he's just repeating himself. I'll be viewing them next week."

The Judge ordered us to settle our attorney's fees; otherwise, I could bring it before the court, for the judge to decide. I took control of the conversation, and asked the judge how he wanted us to proceed. Tofu just stood there, listening to both of us, saying nothing. (As I'm writing this, even now, I'm shaking my head that this all happened.)

After the trial was over, Julian, Erik, and I went to Pasadena for a quick bite. This time, we had duck sauce and homemade pasta. It was rather yummy. We sat outside Old Town, savoring the last moments of summer and talking about our trial.

I felt exhausted though. All the trial preparatory work took a toll on me, emotionally. So, I didn't really feel any happiness from victory. I just felt relieved and drained from the exhaustion. Even as I write this, a day later, I still feel tired. Thinking through every angle of a trial is hard. And it really wears you out.

Anyways, in the evening, a friend had a surprise for me. I got a new white Siamese kitty. I named him Jeh Pan, (pronounced like "Je" in Jelly and "Pon," rhymes with Ron - JePon). It means Trial in Korean. Mom saw him and said, we'll give him a week to try him and see if it works out.

So - I guess Trial's on trial. He's a very intelligent kitty, that's playful and likes humans. Sadly, I read white Siamese, because of inbreeding, have bad eye sight and hence poor hunting skills and live shorter lives than other cats. So - we'll see.

The Tribune wrote about the trial before I got to it. It's a good article. It really shows how bad Baldwin Park is.