Malaise hit me in Celendin. I was alone in the small town, and had just finished Mark Twain's Adventures of Huckleberry Finn and also finished the seventh season of Game of Thrones. Also, because Celendin, in the town itself, didn't have much to do, I felt a sort of emptiness. I had to get myself out of it.

But maybe I needed less excitement and more of the everydayness of life. For instance, I got my laundry, which was in bad need of washing, done. Also, I needed a break from movies or books too.

I really had to process everything Twain was saying about Huckfinn and America and mankind. There was a lot.

For me, the most entertaining part about the book was to see how Huck, a hillbilly teenager, runs away from both his father and the widow.

On one hand, he's running away from oppression, represented by his father - who seeks to harm him, keep him stupid, and tie him down from advancement. On the other hand, he's also running away from the evil's of society, represented by the widow - who is trying to "civilize" Huck. On the surface, she may not seem like an evil, but the reader finds out that she's entertaining the thought of selling her slave and splitting up his family. In the end, Huck has to receive his real education from the wilderness and the river and Jim - the slave - who seems to know more than all of the white characters and is the only innocent person in the novel. I thought it all very interesting. (And there's more Twain comments on - such as the futility of feuding, the hypocrisy of religion, and the absurdity of class structure.)

Regarding Game of Thrones, (spoiler coming), I felt it when the Night King kills one of the dragons. I thought, Oh no! Also, when the undead are like slaves, fishing out the dragon from the ice lake - I thought to myself, That's what Hell's like. Everyone is going to be a mindless slave in endless suffering. Maybe some people are in Hell today. I wonder who envisioned that scene and where he or she got such an idea.

So, because of all the processing I had to, I couldn't read anymore or watch anymore movies. Instead, I just finished up some local projects. Also, I went to some local hot pools near Celendin - in the town of Llanguat. (For those of you who want to stay there, you can for 20 soles, but be aware there's no electricity out there. So at night, you need to sleep.)

It was definitely worth it, and I went back twice. The water is brownish, because there's a lot of iron in it. (What color does iron turn when it rusts?) Also, there was no electricity out there or mobile signal. You really feel like you're in the wilderness, and the solitude really creates an awe-inspiring feeling inside.

After being in Celendin, I took a two hour combi to the largest city of the highlands - Cajarmarca, population about 250,000. Cajamarca is a historic city, as it's the place where the Spanish Pizarro captured the last Incan King - Atahaulpa. You can see his holding cell in the city, where he was held at ransom for a year. 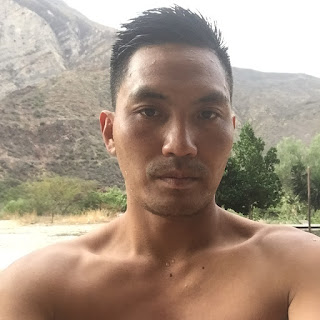 It's a horrendous tale of greed and power. Pizarro, an illiterate bloodthirsty bumpkin, lures the Incan King to come. The King has 6,000 troops, while Pizarro only has about a hundred. He offers Atahualpa a Bible. Atahualpa throws the Bible on the floor. Pizarro orders a gun to be fired; so, that he can justify his use of force.

He orders his hundred troops to blast the 6,000 troops with canons. He holds Atahualpa in a cell, ready to kill him. Atahualpa and Pizarro agree that if the King gives him a room full of gold, he could be released. A year passes. Pizarro gets his gold. Then, Atahualpa realizes he's never going to get out; so, he sends a message to his people. 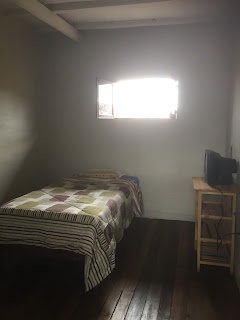 Pizarro intercepts it. He indicts Atahualpa as a heretic and is ready to burn him. Atahualpa confesses and converts and instead is strangled. The whole story reminds me of Baldwin Park; which has taught me, really, only by lying, cheating, stealing, and killing can stupid people become rich and powerful. I think Twain would actually agree. (More can be read about the affair in Jared Diamond's Gun, Germ, and Steel; also, the Bible has something to say about it: "the love of money is the root of all evil" (1 Tim. 6:10).

Today, most of the modern conflicts of Cajarmarca are because of its gold mining, which the rights were given to Americans. But because the mining company was poisoning the water and the wildlife, the locals protested and significantly halted gold mining. (They were dumping cyanide into the water.) Again, another story of greed and unchecked power.

Now, Cajarmarca is known for its great dairy and farming. It definitely has good yogurt.

I stayed near the Plaza de Armas, in the center of the city. It reminded me of Van Gogh's painting of his room. So, I liked staying in my Van Gogh room.

Well, because Cajarmarca had some luxuries that I've been deprived of for awhile, I stayed awhile and liked being there.
I had my cappuccinos, ate some pizza, and had a Mexican taco! It even had guacamole inside. I even had some Chinese food, but it was really embarrassing to speak to the Chinese owner - because it seems like I forgot all my Chinese. (The incident provoked me to possibly go to China on this trip.) There was even fast wifi. Too bad there was no Korean food.

Around my fourth day in Cajarmarca, I met a Flemish guy named Diego, who wanted to go hiking with me. I thought I'd like him more, but on our hike, he proved himself too soft for my likings. He got hungry faster, thirstier more often, and complained more often than me.

In any event, we took a 3.5 hour hike up the hills - to the Moorlands. There, in the rocks, the Incas had an aqueduct carved in it, but because Diego was too tired to finish the last 15 minutes of it, we didn't go. The
hike to the Moorlands definitely had an eerie feeling to it.

Because we were both tired, I had to hail a ride to hitchhike back down. We sat in the bed of a truck during sunset, and we had a beautiful view of the landscape and the city from the open bed of the pick up truck.

I had four arguments in Cajarmarca. Four times people tried to rip me off. I think I haven't confronted as much dishonesty in business owners in Peru than in Cajarmarca. I suppose Pizarro's legacy lives on here. 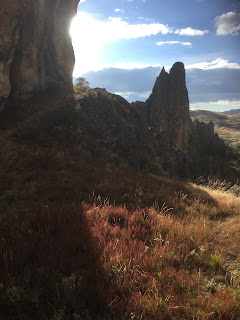