I woke up one morning and decided to go to Ravesh - the name of an area with tombs carved into the mountainside. The Lonely Planet said it was only a 1.5 hour hike back and forth. (Perhaps, I read it wrong.) It turned out to be a 14 hour hike return, but it was well-worth it, because of the stunning view.

I woke up late (because I slept 10 hours and loved it) and had a nice local breakfast, made of fresh cheese. The owner of my hotel has a farm, which makes local dairy. I loved the cheese and milk with my coffee.

After taking a 30 minute ride to the nearest village, I asked a local - "Where's Ravesh?"

He said, "Really far." He pointed to the top of the mountain, and the mountain was really big and tall and said, "At the top. It's going to take 8 hours to go up there."

I thanked him. It was already around noon, and I decided that I wasn't going to make it to Ravesh. Instead, I was going to hike for four hours and hike back.

I walked an hour or two through the shadows of the valley of those grand mountains. Then, I noticed motorcycles zipping passed me, up and up the winding road. There was also a creek that run through the valley.

But while I was trekking upwards, I changed my mind and decided I was going to try to make it to Ravesh.

I saw a motorcycle coming in my direction and decided to hail him down. I asked for a ride. He let me ride with him on the back of the motorcycle to a village an hour and a half away from Ravesh.

From there, he pointed to the the peak of the mountain, which I estimated to be about a mile away, which really meant it was about 3 or 4 miles away, because nothing is a straightforward road in the mountains.

I started my hike from the village of San Salvador to the next village of San Bartolo. I hiked an hour and a half to get to the final village. It was steep and not that easy.

At San Bartolo, I got hungry and asked to buy lunch from some villagers. There was only one shop that sold food.

The owner was a woman, who wore the traditional mountain straw hat and the colorful dresses that the women wear here. She said all she had was pork and rice. We negotiated for a price. I was running out of cash. (See my post on Lemeybambe here: Mummies and Coffee). She agreed. While waiting, I was listening to the conversation the villagers were having. They wanted free food from her.

I had three pieces of pork with vinegar and rice and onions. It was simple but good.

At the registration office, I even negotiated the cost of entering the tombs. I just told the guy there, who looked really drunk, that I was running short on cash. He said I could pay less and gave me directions to Ravesh from the village. It was quite complicated to understand.

I walked to the road to Ravesh for a while, but after walking
about 15 minutes a local caught up to me. He was running. He told me I was going the wrong way. When the local explained the directions, I understood better.

He said I was to follow the paved road and then when the road turned into dirt, that I was to go left. I think because I didn't know the word for "paved road," I got lost.

I thanked him and got back onto the road for Ravesh. You know when you're there, because you see the paint on the walls of the caves. And you see the tombs. There wasn't anything that special about them, but the view of the valley and towns below was stunning. I loved it more than my trip to Kuelap. (You can read about here: Seeing the Ruins of Kuelap with Tobi).


I had internet connection at the peak, which was amazing. So, I texted friends some pictures up there. It was 2,500 meters high or 1.6 miles up.

I sat on the ledge of the cliff and just thought
about life. I probably stayed there for an hour. I wish I planned to stay the night there, because I wanted to stay longer, but sunset was coming soon. I had to return to town. Otherwise, I wouldn't catch a bus home from the village of Yerbabuena, down in the valley.

As I started walking back, the sun was setting. The colors of the sky changed into an amethyst hue. The people at the village said good bye to me. They said they were so happy I came and visited them.

By the time I left San Salvador, it was starting to become dark, but at least there was a moon. I knew with a moon, I had enough light to get down to the valley, but it'd take 4 hours. It'd be about 11PM by the time I got down there, and I'd definitely would have to hitchhike in the dark. That's not really that safe for either party too. But I was low on cash, so what were thieves going to take from me?

I hiked down that mountain at nightfall. It wasn't hard, because I was used to running in the dark and relying on moon and starlight. I could see from below, the last of the worker cars and motorcycles leaving. 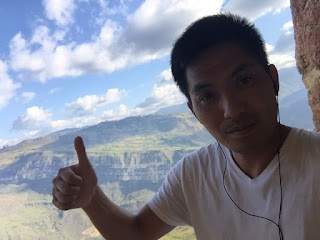 After hiking down in an hour in the dark, one motorcycle passed me. The guy was young. He refused to give me a ride. I was annoyed, because he knew that it was going to be another 2.5-3 hours to get down there.

Then another motorcycle passes ten minutes after him. Although he had a passenger, he agreed to give me a ride. We're able to fit all three people on one motorcycle. It was tight.

I found out they were workers who paved the streets. They also told me they had a few jobs and only rested on Sunday.

I timed the ride. It was about 40 minutes. He dropped me off at the village.

I thanked him and went to a local restaurant. A guy sits at the table by me. We talk.

He asks a lot of questions. I told him that I went to Ravesh. When he didn't know where that was, I knew he wasn't a local. I find out he's from Chiclayo. (That was the city where I fixed everything - you can read about it here: Fixing the Broken in Chiclayo.) He asks me how I know Spanish. (I'm getting that a lot now.)

After dinner, I catch the bus home. I'm tired. I have a hot shower. I'm really happy I went to Ravesh.

I was proud of myself that I managed to do Ravesh with all the challenges I told you about in the beginning. Really, there was so much uncertainty. Would I find a ride up? Would I find a ride down? Would I be able to walk out of there in pitch blackness? Like in Motorcycle Diaries, I was able to "improvise" - a key theme in the movie.

Well, thanks to the "kindness of strangers" I was able to see a beautiful site. (For their help, I sent them their pictures later.) It was one of the times where the journey was that much more beautiful than the destination itself.