I made fish curry for 11 South Americans yesterday. So, I'm staying in a "safe house," by the Caribbean Coast, and the girl in charge ordered me to cook for the Argentinian and Chilean gypsies. So, I agreed. The owner of the house, Jay, and I went to the fish market, which you could smell from far away. I bought vegetables and 4 large fish - which ended being very bony.

I thought curry would be easy to make, and it generally is, but it's a lot more work (no matter the dish), when you're cooking the dish for 11 people. When I was in Huanchaco, I had more help. But here, not really. 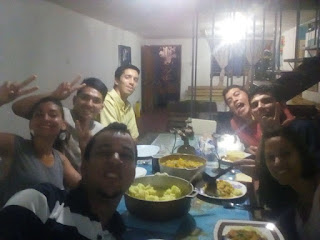 Let me tell you about the 11, generally. They're mainly buskers - you know? Those people who play music on the street and panhandle for money. So, at night, or in the afternoon, they juggle, play the guitar, or play drums to make money. Most are from Argentina, a few from Chile, the owner is obviously Colombian, and I'm the only English speaker.

I have a hard time understanding their Spanish. But I guess, after spending enough time with them, I've definitely learned to hear the different accents to pick out where people are from.

Yesterday, we had 28 people stay in the house. Can you believe that? It's a big house but not that big. Thank goodness, I have my own room.

There's definitely a language barrier - as everyone speaks way too fast for me. And they use a lot of slang and different words. But I remind myself, I should stay. I know I need the immersion, but with the TaylorGate investigation pending, I haven't put a lot of time into studying my Spanish.

Then, there's a lot of drama with the usuals. I don't think I can post about it. But I told you one story - where a guy stole a copper's helmet, and we got raided.

Here's my story. One day, I met a little kitty, who couldn't have been older than 6 weeks old, by the bridge that connects me to the old city. It was cute. So, I petted it for awhile. I looked around for his mother, but the mother wasn't around. After playing with him, he followed me and wouldn't leave me alone. Then, I felt bad and sorry for it. I felt like I couldn't abandon him.

So, I picked it up and in the middle of the night I put him in the house. And that's how the kitty ended up living with us. He just mysteriously appeared one day, and no one knew why. Nobody objected to him. And the owner and the manager seemed to like him a lot. He was such a cute fur ball; I'll have to take a picture of him.

Then one day, I was sitting with Facundo, an Argentinian guy. Then I told him in Spanish, "I have a secret."

I told him, "I brought the kitty to house."

Then he started busting up laughing and saying, "Seriously?" But everyone heard him laughing so loud, I'm sure in the morning, he told them I brought the kitty. I don't think the owner knows the story yet.

Back to the curry. It came out divine, and it really was one of the best curries I had or made, though I don't make curry often. I guess I knew to make a fish curry, because when I lived in commune in New Zealand, over 10 years ago, I made a Jamie Oliver fish curry, which everyone loved. People asked me for the recipe. It's not something you would think would turn out to be a hit for a big group.

I know I could make it better, but here, in Cartagena, I didn't have access to all the spices I needed. And on secret ingredient, I spent a few hours boiling the fish bones into a rich and strong and hearty fish broth. It was certainly a process, especially on roasting the spices - which I always find to be a spiritually purifying and uplifting meditative act. The roasting releases all the rich smells of spices into the air, and it's wonderful to smell. And I'm sure that and the rich broth was what made it taste so heavenly and divine. Needless to say, there were no leftovers.

Anyways, that's my current report from the Caribbean. I'll make sure to go to the beach today; it's desperately needed.
Posted by Paul C. at 12:24 PM