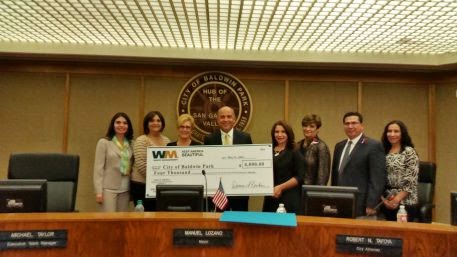 The LA Times wrote a story on the corrupt city today.  It starts off by stating:

"In an 11-page claim filed June 2 with the city clerk's office, Vijay Singhal, the city's former chief executive officer, alleged he was forced from his job in retaliation for refusing to provide favors and concessions to friends and family members of Mayor Pro Tem Ricardo Pacheco and council member Susan Rubio, as well as organizations that financially supported them."

Although I'm on vacation, let me give you the legal commentary.  The 14th Amendment of the United States Constitution, which applies to the State of California, states: "[N]or shall any person . . . be deprived of . . . property, without due process of law . . . ." (bold added for emphasis).

So, when Robert Tafoya, Ricardo Pacheco, and acting Manager Taylor fired the four, including the boxing coach who was making minimum wage at his job for fourteen years, the unenlightened forgot that the Constitution applied to them.  I mean, is it surprising that three of the public officials, including the Mayor, do not even have a college degree?  They're close to illiterate actually, and the mis-writings of Ricardo Pacheco who can't spell or use grammar prove it.

The Constitution applies to governments.  Baldwin Park is a city; therefore, it is government.  Government employment, including Julian's job as boxing coach, is a property right.  So, when the City fired four employees all at will without Due Process, they opened themselves up to huge liability.  Therefore, what these petty people didn't realize was that there are no such things as "at will" government employees.  Every government employee has a right to a procedural hearing.

Now, the City of Baldwin Park is going to be paying out millions for the decisions of these dumbos.

This is what you get when you hire a former personal injury attorney to handle Constitutional issues.  (City Attorney Tafoya also attempted to bill the City $50,000 for his first invoice.  That's more than 50 hours of billable hours a week.  He charges to drive back from downtown to Baldwin Park meetings, even though he has to go in that direction because his home is 10 minutes away in West Covina.  Money talks and logic walks.)

In short, Baldwin Park is run and managed by dumbos.  In this scandal, the following people are involved intimately or loosely: Pacheco, Rubio, Baca, Lozano, Garcia, former Council Member Garcia, Tafoya, and Taylor.  Do you see a pattern here?

Pacheco, Lozano, and Garcia erected a city monument once that said that "It was better before the Whites came."  Obviously, these people have no respect for the US Constitution and its history.

Really, the District Attorney, Attorney General, and FBI need to do an investigation on these officials and administrators.  One only need to look through my other articles to see the level of corruption involved.
Posted by Paul C. at 1:07 AM