The Journey To Butterfly Valley

While I was walking from Kas to the bus stop, a black desert cobra met me on the road. We both startled each other, and it slid through the bushes.

But me being crazy and not normal followed it.  I wanted to see more of it.  It was no where to be found.

I did research on the creature and discovered it was a good thing I didn't provoke it any more than necessary.  The thing is the most venomous snake in the Middle East, and it's twice as venomous as an Indian Cobra.

From Kas, I went to another small village located by the largest beach in Turkey.  I really loved the cabin I stayed at.  I felt at great peace in this cabin, which only cost $20 USD a day and came with breakfast.  I read, used the internet, and visited the beaches and ruins.  The place was so great that I met a German couple that said they've been coming every year for 25 years.

There, I saw the ruins and the beach.  You have to pay $2.50 to enter the beach.  But how can you guard every entrance of the long, long stretch of beach.  I objected to paying because Americans don't pay to enter the beach.  The Kings of Great Britain said it was the public's right.  So, I walked about 5 miles, through the mountains, forest, and through the sand dunes to find a secret entrance.

When I reached the beach though, I had run out of water - again.  At the edge of the water, there was naked British man in his 60's.  I don't think it was a nude beach.  I asked him where I could get water, and he pointed to the cafe another mile away.  So, I walked.

While I walked through the beach, I saw many gay Turks and other obscene images.  I think I was at the wrong part of the beach.

Then, when I got to the right part of the beach, I saw another British woman who had these breasts the size of cantaloupes (rock melons.)  She had a cute girl with green eyes and blonde hair, and the child look at me several times, looked away, and giggled.

Then, the woman took off her bikini and flashed her boobs for everyone to see.  I thought that was strange.  What was stranger is she was doing this in front of her husband.

My time at this place was just about relaxing.  I read a lot.  Napped.  I also ate these wonderful raviolis in town, which were made with fresh dough.  Nothing beats the taste of freshly boiled dough.  MMMMM.  It reminded me more of the Russian dumplings than raviolis, but during my time there, I ate three sets.

I was enjoying myself so much here, I kept thinking of my younger brother.  I kept thinking he would love it at this place - to do nothing and be surrounded by ancient ruins and beach.  Oh, I didn't want to leave.  But I had to continue my journey.

Although I like seeing new things, I was so relaxed, I felt so sad that I had to leave my beach village.  I enjoyed doing nothing but reading, eating, and drinking a glass of white wine while watching the sunset.

While taking a bus to the port village, I got lost.  The dolmus (mini bus) manager spoke bad English and said it was the right dolmus.  Well, he was wrong and the nasty driver threw me out into a random village.

I asked a local where the port city was.  He asked his friend to pick me up.  I ended up hitching another ride in a vegetable truck. 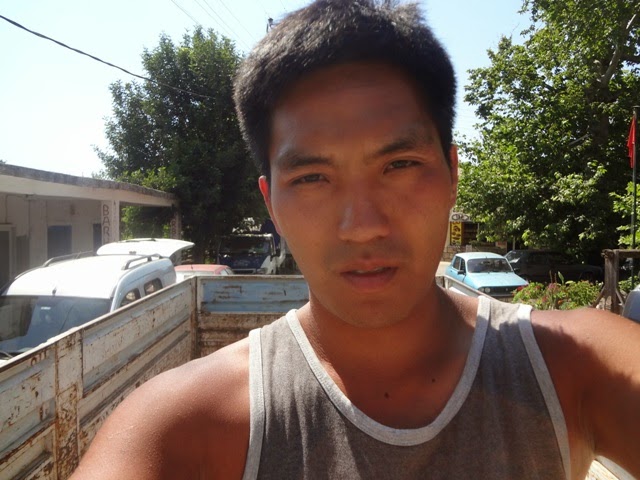 After getting into the port city, I purchased a speed ticket to the Butterfly Valley.  We left at sunset, and it was a choppy ride to the Valley. 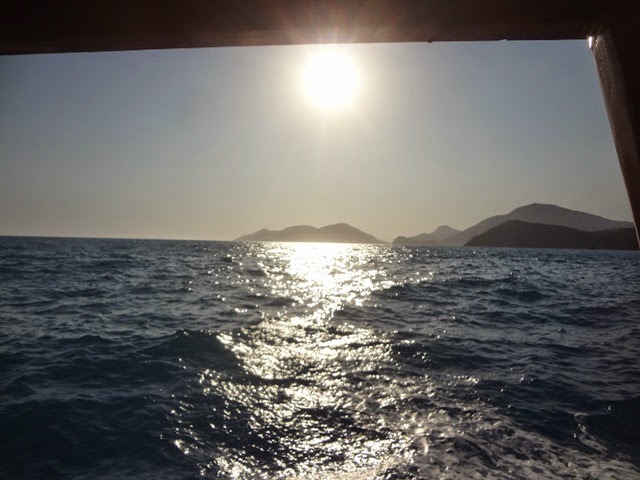 When I arrived on the shores of the Butterfly Valley, a group of Turkish hippies approached me to stay.  Even though they were hippies, they just wanted my money.  Seeing it was already evening, and the next town was a quite a trek, I settled to rent a tent for $20 USD.  I kept thinking about how my cabin by the beach was also only $20 USD.

On the upside, they provided a nice vegetarian dinner and breakfast.  Nonetheless, these hippies were the meanest hippies I've ever met.  They were a bunch of meanies.  Because they were Turkish hippies, they treated foreigners badly. 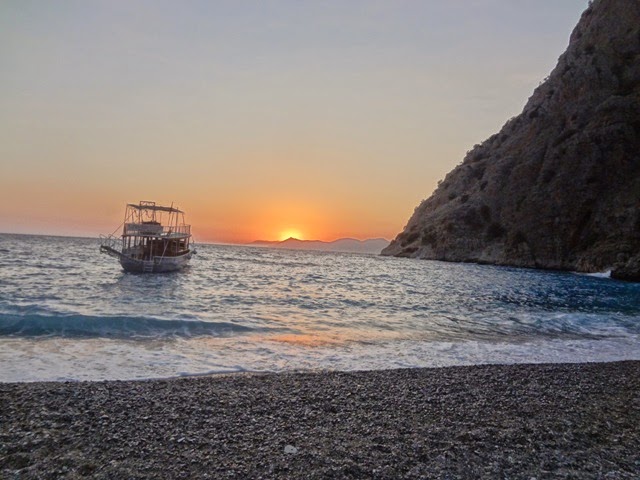 In the evening, I found a spider the size of a silver dollar in my tent.

And, I had a spat with one of the supervisors in the morning.  A person let me use the internet.  A good thing too because a number of reporters have asked for interviews regarding my corrupt City of Baldwin Park.  During my surfing time, this supervisor kept watching me and said, "Next time you buy.  You buy internet."

Then, he accused me of lying when I said someone sold me my drink for a few Liras cheaper.  The equivalent of $1.50 at most.

Oh, this time the lawyering came out of me for the first time on holiday.

I said in a firm and strong voice so everyone could hear in the camp, "You are not a nice person!  You are mean!  And you should never accuse people of lying.  This is what you call Muslim hospitality?!"  It was obvious everyone was feeling ashamed now.

I said, "I'll never come back to your camp.  You need to change.  All you want is my money."

He looked taken back by my fierce words and only said, "Ok, I know."

And I replied, "No, you don't know!  If you knew, you would change and apologize and not behave this way with people again."  The other hippies looked rather shameful.

One told the supervisor, "You shouldn't act like this."

I picked up the dust and threw up in the air and said, "May your little camp be cursed!"

I took my gear and continued my trek.  Maybe if my friends were around, they would've calmed me down. But I think that was the worst treatment I had in Turkey yet.  (If you feel stressed reading it, I definitely felt stressed saying it.  But I think this guy needed to hear how appalling he was treating me because obviously these people are living for free off the dime of guests and tourists.  As a German lady told me in my beach cabin place, "It doesn't cost anything to be nice."  And that is true.  Let's move on.)

I live in the San Gabriel Valley, but it's not a real valley, like the Butterfly Valley, where the walls of the cliffs seem to reach the sky and you walk in a narrow passage.  What the verse means is that you should not fear evil, even when everywhere you look, it looks like you're trapped in the grip of death and shadows.  And certainly, because you're at the bottom of the valley, you are literally in a shadow because the walls of the mountain cast an eternal shadow against you.

I took a wrong turn and ended up on wrong fork on the road.  I took the path to a waterfall.  It was dangerous to scale the waterfall because the rocks are slippery from the water sliding over it.  You have to use ropes to climb it up.  Yesterday at camp, a girl cracked her head because she slipped and paramedics came to her.  Nonetheless, I scaled perhaps 280 meters of the waterfall. 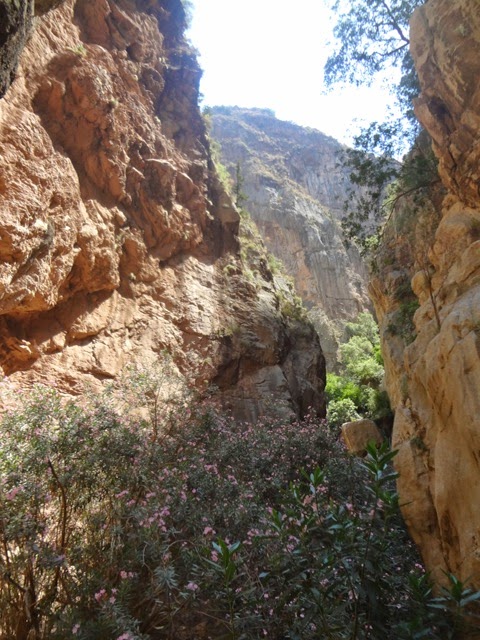 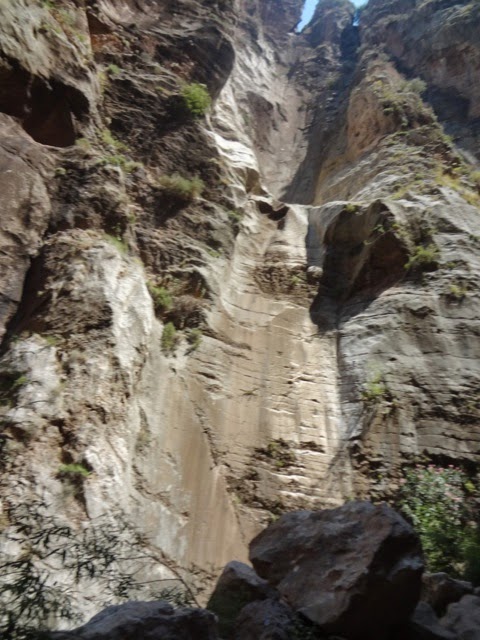 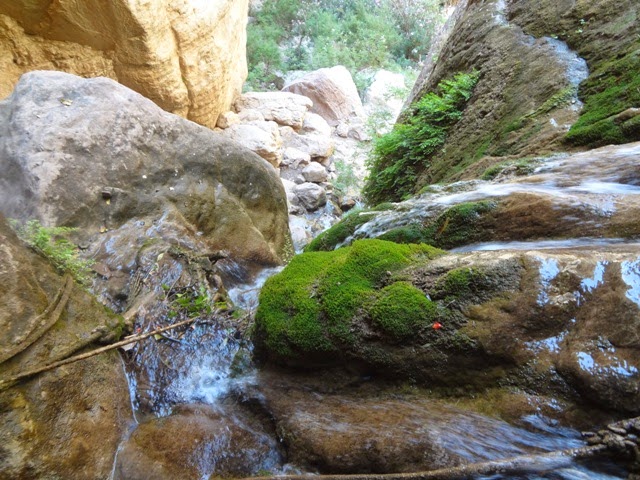 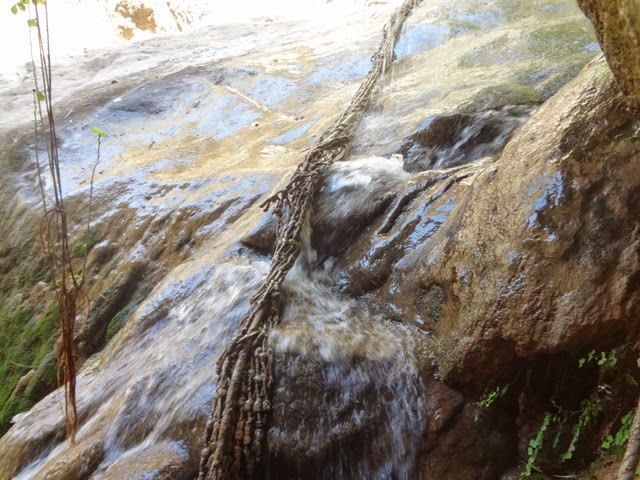 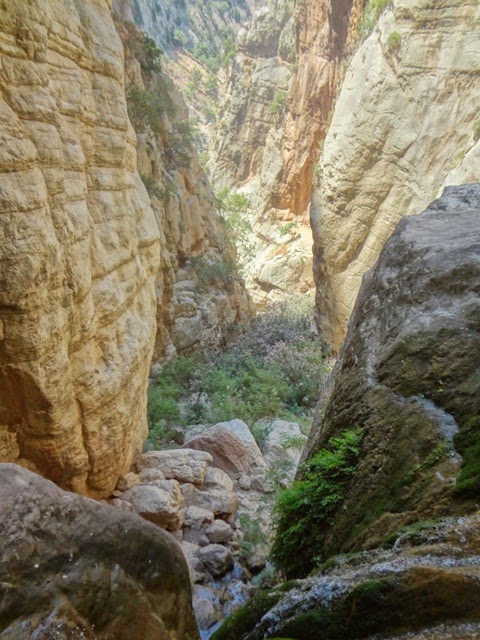 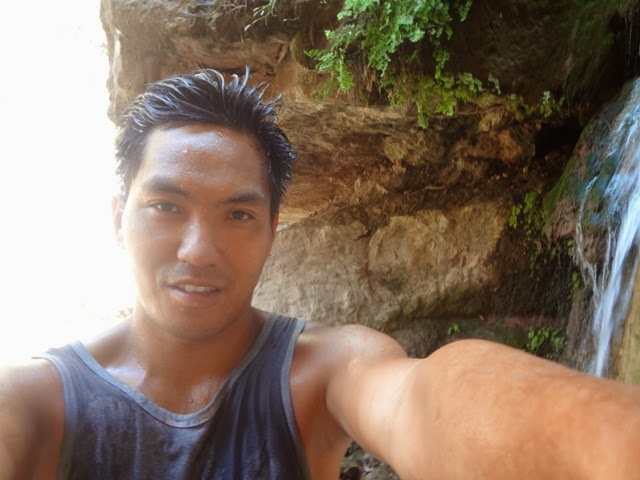 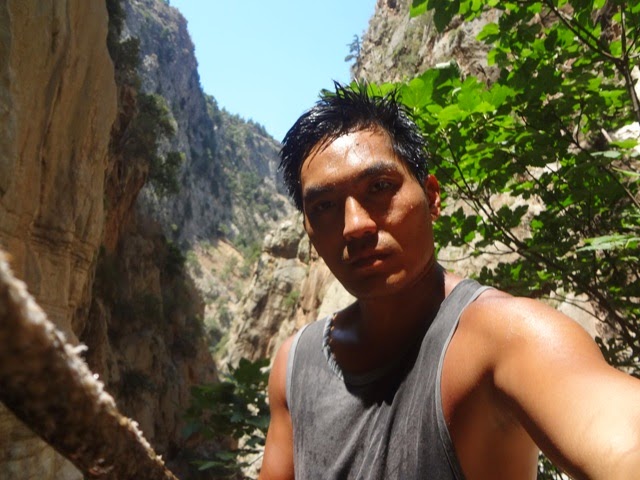 So, as you could see, I got wet, and I managed to get to the top of the waterfall.  Then, there was about 50 meters (164 feet / 55 yards) up left to go, and it was direct rock climbing, except there were no ropes.  I started climbing the vertical cliff, but then I noticed that my foot dislodged one of the rocks.  It ended up falling all the way to the bottom of the valley.

The crack was so loud that I decided that I wasn't going to scale this cliff.  It was the wrong way for sure!  Perhaps, I wouldn't die because a tree would break my fall, but I would certainly break a leg or an arm if I fell.  And there were no more ropes, which already made it dangerous enough.  I had to get down off of the cliffs, all 350 meters.  I can tell you it was a lot harder getting down than going up.  I slipped twice going down, but because I was clinging to the ropes, it resulted in me swinging back and forth on them for awhile, like Tarzan would.

To make a long story short, I backtracked all the way back to the fork and found the right road.  I had to climb the height of the Empire State Building again.  The road out was at an angle of at least 70 degrees and at times, you had to climb up the rocks vertically at a 90 degree angle using only ropes.

The message on the rock at the start of the trail says, "Please be careful climb to village can be dangerous."

It was dangerous but not as dangerous as scaling that cliff with my bare hands.  I made it to the top of cliffs, and I was huffing and puffing at the end because it was hot, I ran out of water again, and I had to do it twice.

I filled up on water at the local Mosque in the village.  Every Mosque has fresh water because Muslims have to clean themselves before they pray to Allah.

I hiked another 7 miles through the mountains.  This time I had water but my stomach was grumbling.  Keep in mind this whole time, I have about 10-15 pounds on my back, yes, even scaling the waterfall.

My next location was at the beach of the next valley.  So, I had to trek another 2 miles into another valley.  When I reached the next location, the owners wanted to overcharge me for another tent.

There was a Canadian hippie girl who lobbied hard for me to stay.  The owner's wife also cut me a discount.  I made it there around 5:30 pm.  I didn't want to do anymore hiking, even though I could have.

The Canadian kept flirting with me, but I wasn't interested.  She struck me as ordinary.  The next morning she woke up in the tent of another man and pretended not to know him at breakfast.

Anyways, I had made it to my destination on the trek.  The camp provided the best Turkish dinner I've had so far: lemon and spice marinated chicken with fresh vegetables.

The next day, I ended up using up the whole day to get back to Antalya, where the rest of my luggage was.  It took 6 hours of hiking and taking buses and probably another 2 hours of waiting.  I would fly out the next night to Istanbul.  This part of the journey was over.
Posted by Paul C. at 2:03 AM