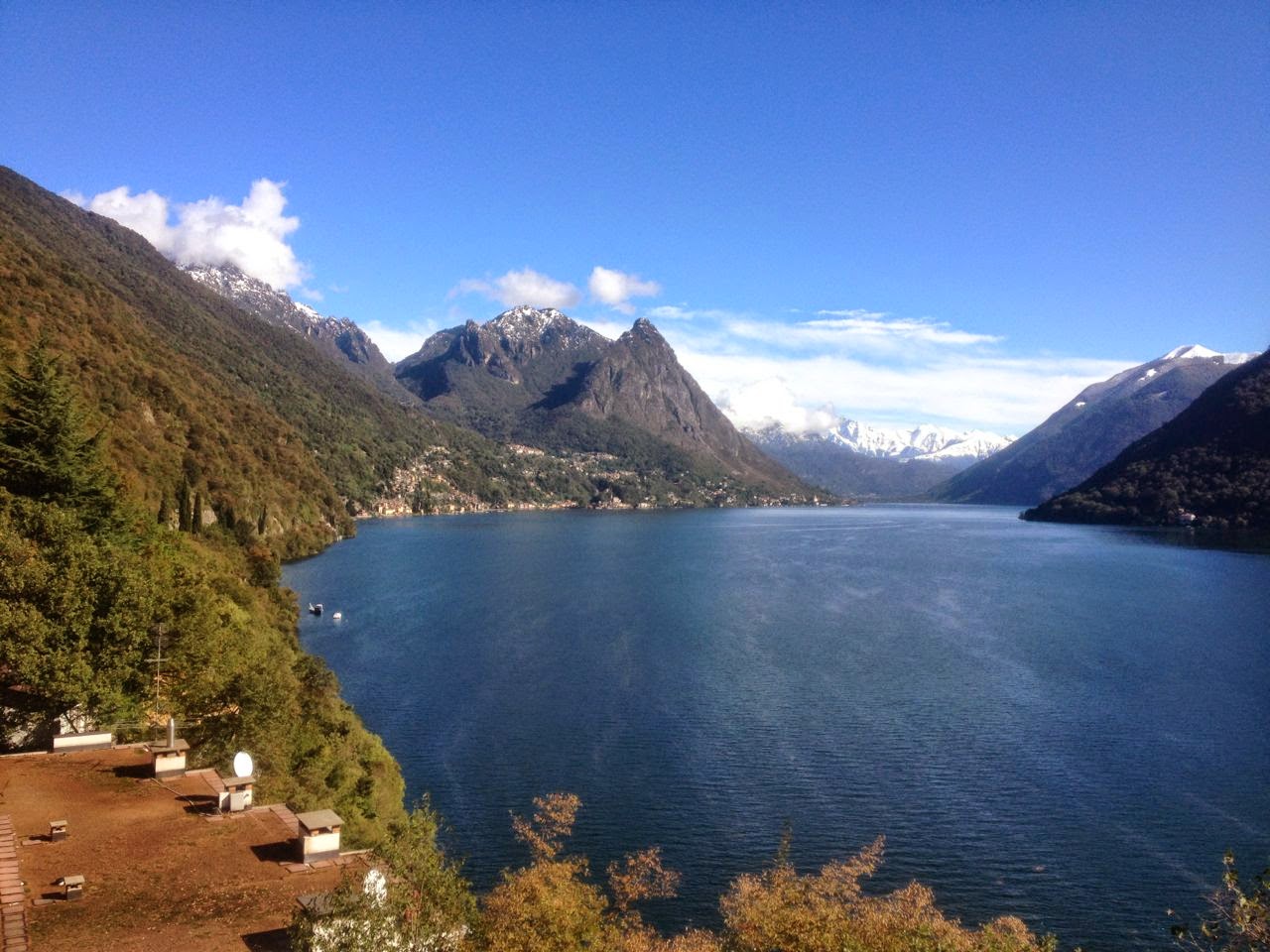 I met a privileged friend when I scuba dove in Mexico - the days when I played with acrobatic seals like they were marine pups -  and he invited me to his home at the Italian and Swiss border.  I asked if he meant it, while I was in Turkey, and I asked if I could come and he said yes.  Thus, I flew from Isanbul to Milano, Italy and took a bus from there to Switzerland.

My friend had such a great energy when he saw me.  He took me to his house, which was on the mountainside overlooking the lake.  The whole area looked like a fjord.  It was a valley, with high mountains, that was filled with sapphire waters.  The whole area seemed to be the world's secret, and the mountains and lakes were cloaking it from the rest of the world.

The first night, we drove to Switzerland and ate at one of their biergartens.  There, we ordered cured meats and hams, and I ordered duck pate, which was in fat.  We also had spiced ribs cooked over a wood fire oven.  The ribs had the strong taste of salt and pepper and other spices.  It was different than the American version, which is lathered in wet and sweet barbeque sauce.  Nonetheless, the meats all tasted very succulent and the pate was everyone's favorite.

The second day, we took the dogs to the veterinarians.  The family had two dogs: a doberman and a rottweiler mix.  They also had three moggies, all of which I liked.  I liked all the animals and the rottweiler took a real liking to me.  For lunch, we had gelatto and a cappuccino.  For dinner, I had pizza frutti de mare (fruits of the sea or seafood) pizza, which was baked in a wood fire oven.  The pizza had that wonderful smoked flavor and the dough had bubbles, a result form being exposed to a really hot temperature.  When I bit into it, the tomato sauce was sweet and th dough was crunchy and the seafood tasted like the fresh sea.  I swirled a glass of wine and drank it with the pizza to wash away the salty taste from my mouth.

On the third day, I ran 10 miles from Italy to Switzerland.  I carried my passport, just in case guards would stop me.  I ran down the mountain and then through the Italian villages and then through the long tunnel, which was carved through the mountains.  I never ran through a mountain tunnel before.  It was dark inside with many cars driving through.  And when I passed the Swiss border, I saw the the Swiss flag, a white cross against a red backdrop, waving in the winds.

I then stopped at a pier.  I looked at the lake and thought about my life for a good while.  What did the future hold?  What should I do?  Then after thinking about my life, I took off my shirt and jumped into the lake.  The lake was deep and like a frog, I tried to kick my legs downward towards the bottom.  I never reached the bottom.

I ran back and hiked up the mountain back to the house.  I got lost.  And on my way, I saw baby salamanders in the forested area.  They were beautiful.

I cooked dinner that night and we ate on the porch.  We watched the mist cover the mountains.  I cooked stuffed squash with pancetta (cured Italian bacon) and green beans in French mustard cream sauce and the wife cooked cubed chicken in cream sauce.  The squash and the green beans were picked from the family's garden.  The family loved the food, and enjoyed eating outside, where we lit candles and watched the clouds roll in.  They looked like streams of ghostly smoke.

After being exposed to the cold, we went into the family's steam sauna.  It warmed me to the bones.  But I was tired from cooking and from drinking a glass of wine or two.  So, I couldn't last in such heat.

On the fourth day, the host drove up the mountain with the dogs.  The mountain was foggy; so, we couldn't see the lakes below.  We hiked with the dogs.  At the end of the hike, we went to a cabin and ate there.  The food was hearty and for a hunter.  I had polenta, which is like a mashed potato made out of corn, with deer stew.  We also ate cured hams.  All of it was good.

After dinner, we sat in the dry sauna.  I baked in it for 10 minutes.  After baking in it, I jumped in their pool to cool off.  After cooling off, I baked in the sauna again.  I did this four times.  I had a wonderful sleep.

The family was nice.  I enjoyed my stay there.  I wish I could've stayed longer.  It's a place I could see myself taking time to write a manuscript.  In any event, I have to leave to my final destination tomorrow.  I fly from Milano to Madrid, Spain.

Here are pictures of the house and area and the sunset is a view from the house. 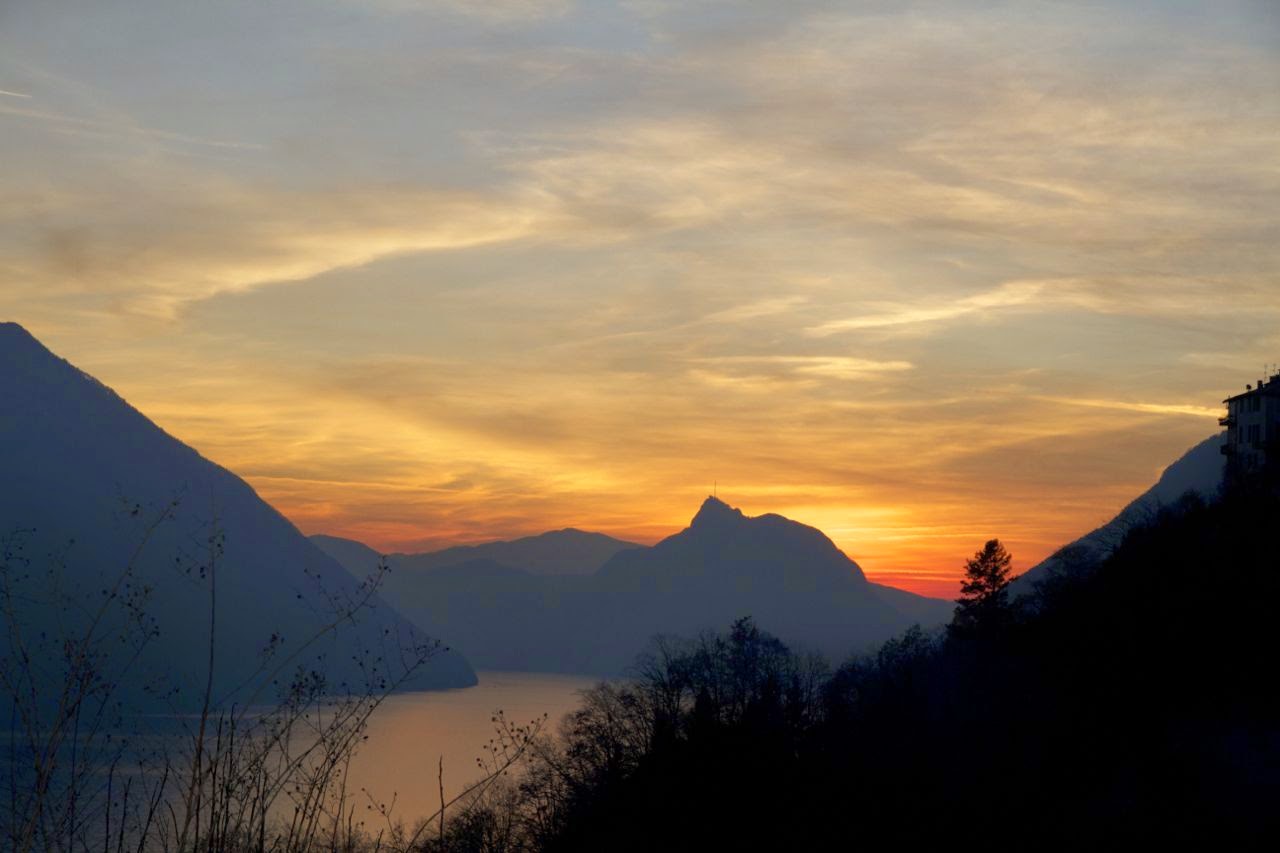 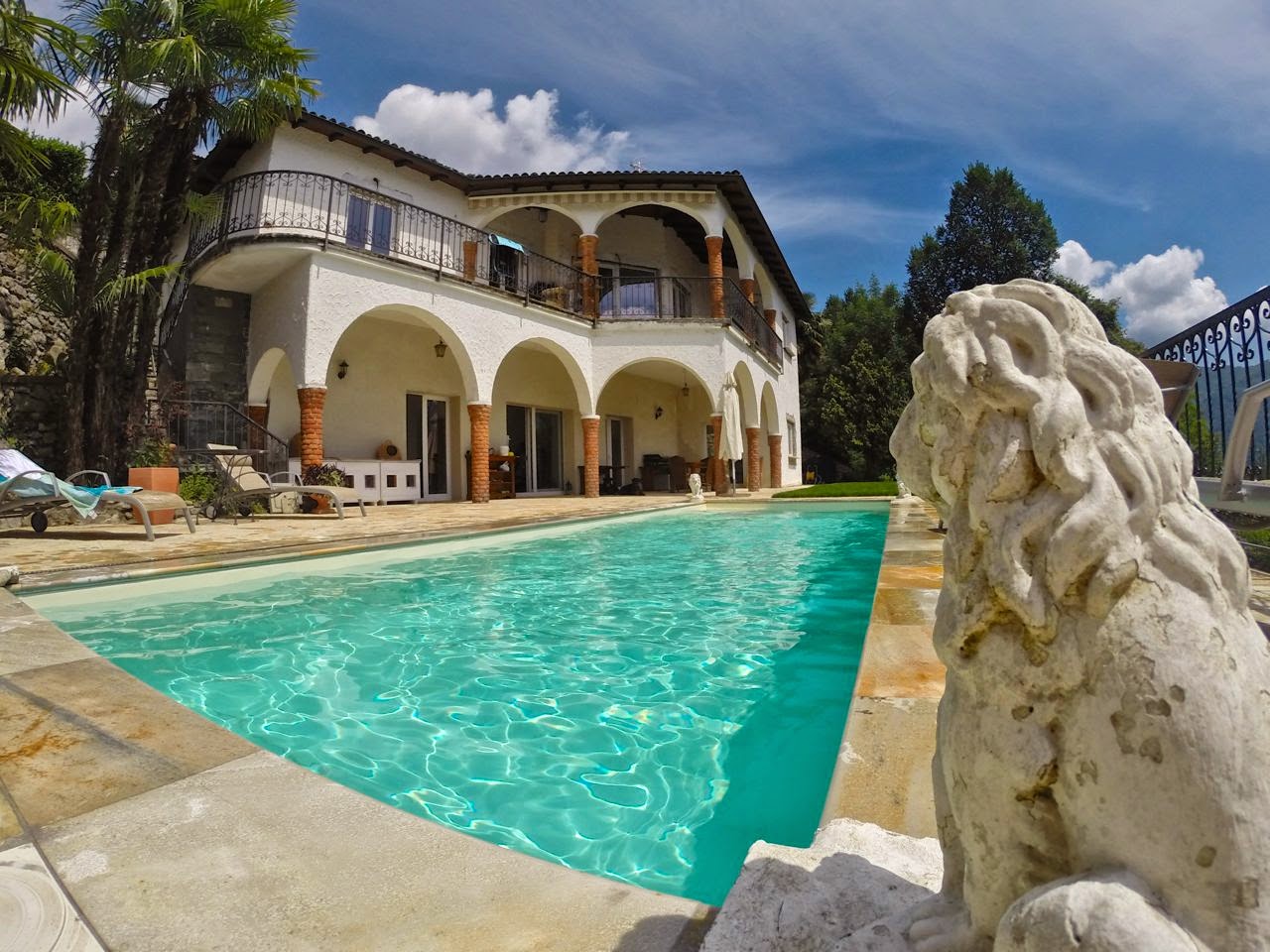 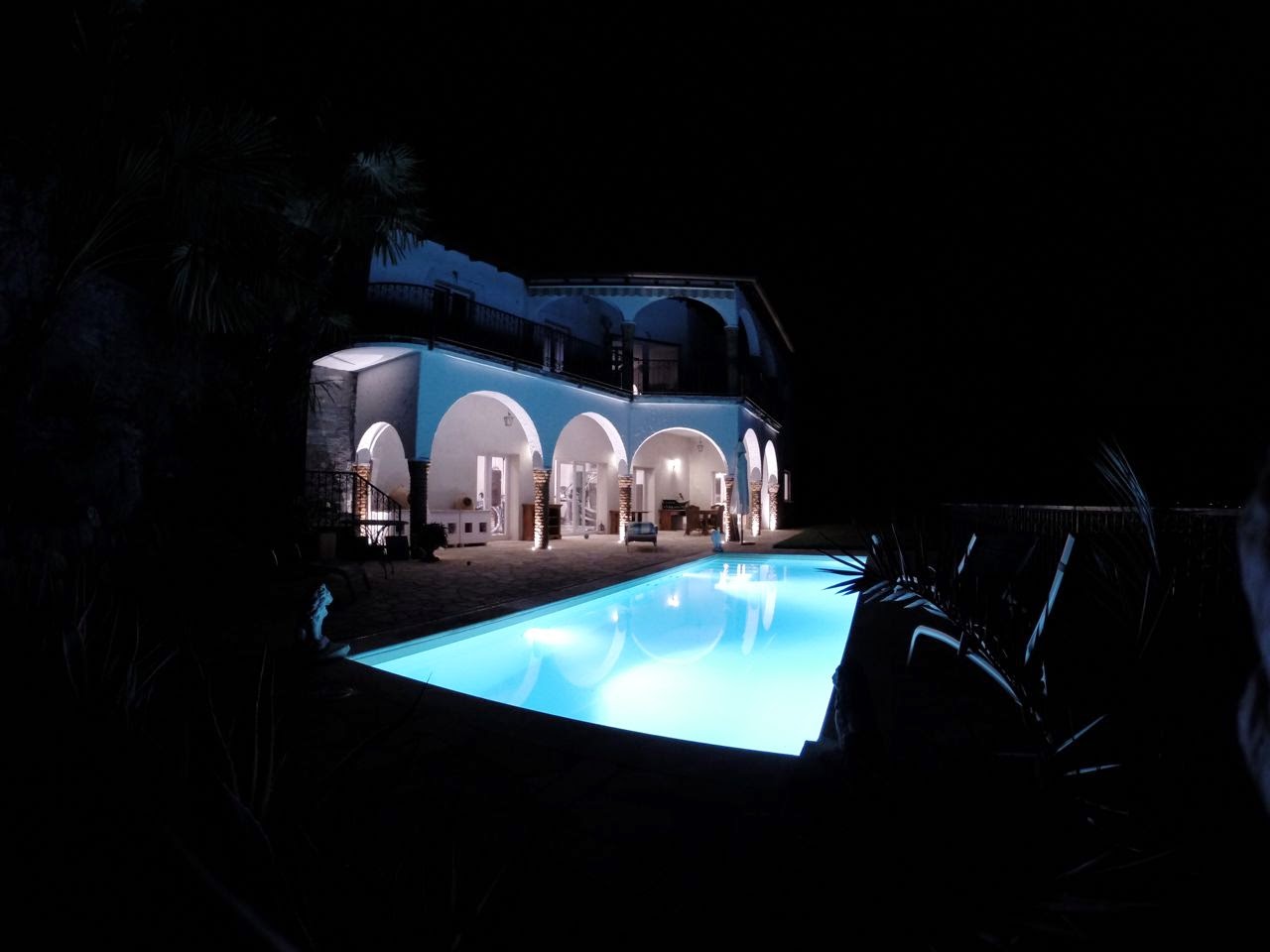 The last picture is of the bedroom I stayed in.
Posted by Paul C. at 3:19 PM