I haven't been formally working for 227 days now; that's about 7.567 months. When I saw how long I've gone without working, I was pleasantly surprised I've gone this long without having someone pay me: client or boss. (Though on this trip, I picked up some money by doing a few odd jobs and got free room and board by volunteering at a hostel.) But, wow: 227 days!

That's pretty good I've come so far. It's not like I've climbed Everest or built a skyscraper or a ran the mile under four minutes. No. But I at least have said, "No more" to a world that wishes to squeeze my blood, sweat, and tears to advance the profits of others. At least on my sabbatical, I've chosen and choose how to devote my labor and time to advance my own skills, knowledge, interests, and works. Really, I've taken a break to live the most beautiful life possible - as a kind of celebration to being completely debt free.

I argue often with a Russian friend of mine - who says I'm not working. He should say - I'm not working for money, because I am working. (He disagrees doggedly.) Just look at all the articles and muckraking I've been doing. Those articles and the research that goes into them doesn't happen magically. They need work, from me and others. (Thanks to those who generously contribute their time and talent to advance the cause of an honest government and hold greedy and thieving politicians accountable.)

But my Russian friend is right - I haven't made a cent off of any of these recent writings. And that only shows that the works and projects I spend time are on things that I really care about and love. (Ironically, the painting is by Van Gogh - someone who dedicated his life to his art but never received the appreciation merited in his lifetime.)

And what's the reward? To improve and develop and hone the talents, so that I can become a fine craftsman in the projects I do. Here'a great talk by Stephan Sagmeister on sabbaticals.

To be honest, though, it's not all sunshine. Perhaps the biggest and most-felt drawback is feeling the loss of missing people (and my awesome kitty Jeh Pan). The other day, I remember how my mom made my favorite Jamaican Blue Mountain coffee at the perfect strength when I wake up in the morning. Jeh Pan comes and greets me and says good morning. I pick him up. He's big and heavy. Then I tell him: "Come on, let's go see Mom." In response, he shakes his tail, while I hold him.

I bring him with us to the dining room. I let him down. He meows at Mom. Then, I sit with my mother at the dining table to have a wonderful Korean breakfast of hot and steaming rice with cracked crabs and fish and we talk about the day. I tell people - my day goes downhill from there.

Regardless, in this season of this sabbatical, without a doubt, the most important lesson I've learned is how grateful I am to be alive. While I was swimming in the calm and peaceful turquoise waters of the Caribbean, a speed boat came straight at my head, potentially killing me. I dove underneath the boat, but the propeller still slashed into my shoulder and head. I ended up with stitches and that was it. No missing body parts, no broken bones, no lost life.

I do have scarring though, and perhaps they're supposed to reminders of three lessons I learned. (1) Be grateful to be alive. (2) Know that our lives are like a candle, which can be blown out at any second. (3) My God is the God of second chances. The principle of second chances is echoed in this scriptural verse: "But if we confess our sins to God, he will keep his promise and do what is right: he will forgive us our sins and purify us from all our wrongdoing." 1 John 1:9 (Good News).


To conclude, one big advantage of time off is being able to read more and watch more movies (and I'm not talking about the junky kinds). So, here's my list for February of 2018. (I haven't posted one since March of 2017).

1. The Director of Old Boy, Park Chan-wook created another Masterpiece - The Handmaiden. This is probably my favorite film I've seen recently.

Set during Japanese Imperial Korea, Amazon describes the movie as follows: "PARK presents a gripping and sensual tale of two women - a young Japanese Lady living on a secluded estate, and a Korean woman who is hired to serve as her new handmaiden, but is secretly plotting with a conman to defraud her of a large inheritance. Inspired by the novel Fingersmith by British author Sarah Waters, THE HANDMAIDEN borrows the most dynamic elements of its source material and combines it with PARK Chan-wook’s singular vision to create an unforgettable viewing experience."

I recommend this movie, because I think Park skillfully tells the story from three different perspectives. The film stresses the importance of seeing a narrative from different lenses and how much that story changes or differs, depending on who tells it. By watching this film, I felt like I learned a little better about how to tell a story through different fragmented views.

For my conservative viewers, this movie is full of lesbian sex and nudity. If that's going to offend you - don't watch it.

2. In The Internet's Own Boy, director Brian Knappenberger brings us a biographical film about the life and death of Aaron Swartz - a computer programming child prodigy - who committed suicide by hanging at age 26 because of the pressures from the U.S. Attorney, who tried to convict him for 38 years of prison time. Swartz was the cofounder of the Reddit and teenage millionaire - who threw it all away to pursue free speech and free information activism in the realm of the internet. Although able to defeat Congress' bill to restrict the internet, otherwise known as SOPA, Swartz broke under the pressures of retaliation and persecution.

I recommend this movie, because it shows several concepts important for the strategist. One, Swartz was a genius to fight his political and corporate enemies on a terrain they were absolutely unfamiliar with: social media. Congress and its supporters were thrown off their high horse. As Gene Sharp says - bring your enemy into your territory. And by doing so, he won. Swartz really pioneered a roadmap in leveraging social media against rich lobbying interests.

But point two is just as important. Know and never underestimate your enemy, a fundamental principle espoused in Sun Tze's Art of War, which appeared in my March reading list. As Sun Tze  said - if you only know yourself and not your enemy - for every battle won, one will be lost. Anyways, even if you're not a strategist - this movie is important to see how anti-Democratic the US is becoming and how corporate interests are hijacking our laws and politics.

In 1972, over 50 years ago, Dr. John Yudkin does an extensive study on the past, present, and future of sugar, its industry, and its consumers. He details the horrible effects it has on the body and human society and makes his case convincingly with brilliant experiments and thought. The sugar industry dismissed him and attempted to smear him as a quack and his work as a "science fiction". Over 50 years later, almost all, if not all, of Yudkin's predictions have come true regarding sugar, it's effects, and it's damage on individuals and society. A number of people claim to predict the future, but we're to trust only those who actually have a track record of getting it right. Yudkin is your guy.

For the sake of humanity, everybody needs to read this book and demand change from our food industries. 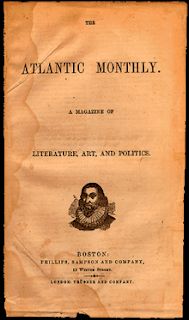 I recommend this magazine because it's interesting and the writing is of high quality. My favorite articles tend to focus on current cases before the Supreme Court.

I'm warning you in advance, it's unashamedly vocally liberal and Democratic, but that shouldn't be a reason for you to avoid reading it if you're conservative. There's something for everyone in The Atlantic.

For your information, Mark Twain was even a contributor for The Atlantic at one point.
Posted by Paul C. at 11:36 AM