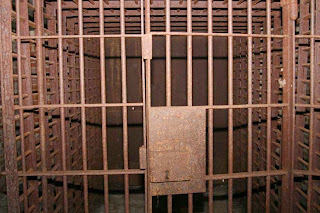 What do I do? What do I do? I'm a prisoner here, now. That's what kept going through my head. I'm trapped in the international terminal in Sao Paolo Airport.

The South African staff stopped me from boarding the airplane. I spent a few days in Argentina (which I'll write about later), and apparently, if you stay there - you need to get a yellow fever shot. Not only do you need a shot, you have to wait ten days before you can travel to South Africa. (Believe me, I thought about receiving a shot at the terminal.) But because of the 10 day rule - that would mean I'd be trapped at the international terminal of the airport for 10 days. I don't think that'd be that fun - sleeping on airport chairs and eating fast food three times a day. You'd also not see the light.

I tried arguing with the staff that they needed to show me the regulation of how long one needs to be in Argentina to require this shot. No one could show me this proof. But that didn't mean I was boarding. Nope, they were clear. I wasn't getting on the flight.

Why am I trapped? Because, Americans need a visa for Brazil. But there's a rule that you don't need a visa if you're just transferring, which I was. I was a good lawyer and thoroughly checked the rules and laws of Brazilian immigration. (I may not have been the best lawyer though, because what I didn't check was this Yellow Fever vaccination shot requirement for South Africa - which I never heard of.) And Brazil is really strict about this "only being in the international terminal rule". So strict, that they even had Turkish Airline Captain escort me to the international terminal to sign off that I was definitely flying out of here on another flight. Brazil even made him sign for it.

I flew from Buenos Aires to Sao Paolo - only to transfer to Africa. Apparently, Turkish Airlines was supposed to tell me at Buenos Aires about showing proof of my yellow fever vaccination. But they let me board. And that's what started the Catch-22, which is defined as "a dilemma or difficult circumstance from which there is no escape because of mutually conflicting or dependent conditions." The definition should add that bureaucracies create dumb rules that they don't think about to create these impossible situations.

Anyways, I was a prisoner, because I can't leave the international terminal. I also don't have a flight onward. I also can't afford $1,000 to fly out of here immediately. I'm stuck. This reminds me of another kind of vision of Hell. You're trapped. There's no way out. You can see the people coming and going, but not you. You've come, but you can never leave.

You know what was the worst? That a number of the staff from South Africa - the same ones who prevented me from going onboard - wouldn't help me out of the situation. They said it was Turkish Airlines fault, since they weren't supposed to let me board. But no one from Turkish Airlines is here today, because they're not operating today. (Remember; I said this is like being trapped in a nightmare.)

1. Go back to Buenos Aires,
2. Pay to go back home,
3. Go to Istanbul via Turkish Airlines (maybe on their cost),
4. Stay trapped.

(Sigh). How does this kind of stuff happen to me? It's situations like this that make me want to come home. I've been trapped in Russian house arrest. I almost died in a Turkish desert. And, let's not forget that I could have been killed by a boat propeller splitting open my head or by drowning.