An Accident Gone Wrong at Sea

I developed an unhealthy overconfidence of the water. A few days ago, I had canoed out 8 miles, far out into the calm sea a couple days ago. Last night, a great storm ripped through the island. The thunder and lightning tore through the sky and woke up everyone in the hostel. In fact, the lightning and thunder came simultaneously. I had slept through most of it, believing that it was all in a dream.

The storm was dragging itself out into the morning. I was trapped inside my hostel until the midday. Then around 11:30 the storm had relented and left. I thought to myself, you need to do your daily physical activity. P.E. in the Caribbean Sea you can say.

I thought to myself, impulsively, to take the canoe out again. Instead, I kayaked in the direction of another island, in the direction of Belize City. I go out, in the Kayak, by myself. There’s no life jackets in the canoe. After about a half a mile out, I reach a point where the winds began cutting through the water. I think this is no good. I want to head back. Let me jump out for a swim. I do.
When I come back out, I think why is the canoe so far away. So, I start swimming and the canoe is still far away. Alright, time to put some real energy into this. I sprint-swim towards the canoe. I can see myself getting closer and closer to it. However, I’m also feeling more and more exhausted. I reach the canoe, and I realize, I don’t have enough energy to thrust myself out of the water. Uh oh.

I make the decision to abandon the boat. I then realize, I’m in the middle of the open ocean. There’s no one!!!! Oh )P(*&()*&! I’m so screwed! I sea some ships anchored about 10 meters away from me. “HELP ME! Help ME!” I scream and scream. No one is there, great. I have no more energy. The wind is making waves hit my face. I need to relax and rest.

About 10 meters away, I see a marker. I swim to it. I hang onto it for dear life and breath. I’m waiting for boats. But boats won’t be coming out today. I know it. All the trips were cancelled because of the storm. I probably hold onto the marker for about 15 minutes, as I realize boats aren’t coming out.

Well – the mangrove forest is about half a mile away. I see it. Time to swim. So, I watch the canoe floating away, while I exhaustively swim to the mangroves. I was feeling my spirit break, when a voice in my head said, “Today, is not your day to die.” That belief, that thought, that hope, somehow gave me enough energy to help me swim to shore.

Even though the Carribean Sea is warm, I also began feeling my body chilling. It’s because the blood has surfaced to the skin. Even with the warm water, it’s not at body temperature. The water, as I so often have experienced, is eating away at my body heat.

When I finally arrive onto land, I try to stand. But I have such an incredible headache, standing up does something to increase my headache. Also, when the wind touches my body, it makes me go through even more chills. As the wind dries off the water, the water sucks up a bit of body heat. The result is another chill. I feel pain, misery, and adrenaline all rushing through me.
I walk to the other side of the island – it’s another mile away. I feel strange. My body’s just dumped a chemical cocktail of endorphins, adrenaline, and euphoria and energy all in one. It’s the best high I’ve ever felt but worry is still coursing through me too. I’m at the boat gas station. There’s no one there, except the owner.

I tell her my story. She picks me up in her golf cart, which are the cars they use on the island. She takes me to the fisheries, who do nothing for me. At this point, I’m catching my breath. My diaphragm hurts and is feeling sore. I quickly walk back to the hostel.

I tell the hostel owner what happens. He quickly rushes to get a speed boat. He says, “I don’t think we’re gonna find it, Mon.” It’s like literally finding a needle in a haystack. I wait around. 20 minutes later, he gets a speed boat.

Five of us travel, on the deep blue sea. We head off to the five mile water mark. He sees a speck at the horizon. He turns to the right, and Hallelujah, there’s the kayak with all my gear inside.

I think I have a new respect for the sea and a new gratefulness for life. But I'm like a cat, more than nine lives.

The Lobster Fisherman and His Son 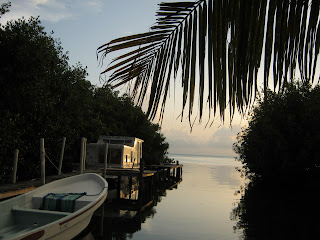