Be Salt; Be Light 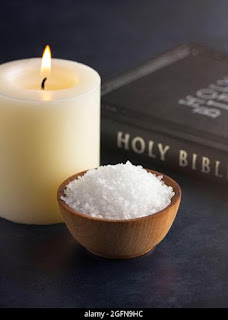 I'm sorry I haven't wrote in awhile again. Because again, my family's had health issues. Several weeks ago my father had a fall. While this happened, I was also working on his elder abuse case. His girlfriend and family appear to be the culprits.

Then, after the fall, my father was hospitalized last week and nearly died. He was in a coma and his body was convulsing violently. Very sad to see.There were all sort of complications and details that I won't discuss. I will say it was a very frustrating and painful ordeal.

In any event, he's recovering and doing much better - though he's not out of the woods yet.

What did I learn from all this? At one point, I felt tired from dealing with all this, especially when these duties weren't assigned to me. Family issues are tough.

But I asked a former pastor of mine for counsel, and I was encouraged by it. He told me, "I'm glad you're doing everything you're doing. As a Christian - you're duty is to expose and fight evil, and shine a light on it." Those words helped me confirm that I was doing the right thing, even when other family members told me otherwise. (That's family for you, and as the Chinese say: "Matters of the heart are complicated.")

I'm glad I stuck with it, and persevered. I'm blessed to have great counselors, especially older ones who respect fathers. It helps to have a coach in your corner, who has experience with darker people and knows how to sort them out.

After I put my father in a safe place, I saw a strange sign. (From time to time, this happens in my life.) Our cat, "Jeh Pan", (Trial)), killed and brought me several lizards as presents. I told him, "Jeh Pan - the lizards eat the insects. Stop doing that." But he looked at me in a way that told me he wasn't going to listen.

Later that day, Jeh Pan jumped on the house's official chair. From there, he watched all the various fish in the aquarium and made it clear he was now in charge. I smiled and said, "Sah Jah (Lion) - you are way too spoiled for your own good." But we spoil him, because we love him.

The day after, at around 1am, I saw a pack of dogs chase my cat. Taking advantage of the darkness, he ran and hid underneath a car. The dog was still prowling out on the street, but after my run, I found him in a hiding spot and picked him up and took him home. He was happy. Now he acting like the king of the block.

Anyways, last year, I wrote that the verse of the year was  Hebrews 12:14. (GNT): "Try to be at peace with everyone, and try to live a holy life, because no one will see the Lord without it."

Finally - the theme of my year has come to me. “You are salt for the earth. . . . You are light for the world. . . . [L]et your light shine in front of people. Then they will see the good that you do and praise your Father in heaven." Matt. 5:13-16 GNT. Remember; salt and light are not incidental elements; they have the power to destroy disease.

If you're not that into the New Testament, I think that the Jewish Scripture equivalent is as follows. "No, the Lord has told us what is good. What he requires of us is this: to do what is just, to show constant love, and to live in humble fellowship with our God." Micah 6:8 (GNT).