On April 7, 2021 - Council Member and Mayor Pro Tem, Alejandra Avila stated that she wished "to hold off" on looking for a new city attorney, even though the current one, Robert Tafoya, was served search warrants by the FBI. (See video at 1:10). From the video, it's clear that Avila blocked Council Member Damian's request to find a new city attorney by asking why the city needed a new one, even though the current city attorney appears to be connected with former Council Member Ricardo Pacheco, who pled guilty to accepting over $303,000 in bribe money regarding marijuana distribution. Council Member Paul Hernandez states that he is "comfortable with the services that we're providing . . . I don't feel like we should put out an RFP [Request for Proposal]." Similarly, Council Member Monica Garcia "questioned if it was the right time for this". Garcia made the third request to put a search for a new city attorney, "on hold". Does political campaign contributions have anything to do with keeping Tafoya?

Besides the federal probe, Tafoya has been a controversial figure in Baldwin Park. Tafoya was fined with $36,000 in sanctions in the court by filing a fraudulent disability lawsuit, placing a criminal doctor on the stand that had no personal knowledge of the case, and then walking out on his client's trial entirely. Other problems have ranged from alleged excessive billing and drafting contracts that stated that a police chief could only be fired if he was convicted of a felony. Tafoya also has a money trail that can be traced back to the three council members, who support keeping him.

From January 1, 2017 - September 19, 2020, Council Member Garcia reported that she received $8,800 from Tafoya and his law firm. Also, Garcia received significant contributions from those affiliated with Tafoya. Cristeta Paguirigan-Summers gave $13,200. Cristeta is also affiliated with Albright, Yee & Schmit, who gave $2,000. David Olivas gave $2,000. Leal & Trejeo and Anthony Willoughby II gave Garcia $2,000. Willoughby is currently at the center of an alleged scandal regarding his employment and marijuana distribution licenses.

From January 1, 2018 and October 20, 2018 - Council Member Avila reported that she received $4,457.79 in campaign contribution from Robert Tafoya and his law firm. Furthermore, Avila received another $1,500 from Albright, Yee & Schmit, a firm that Tafoya frequently subcontracts. 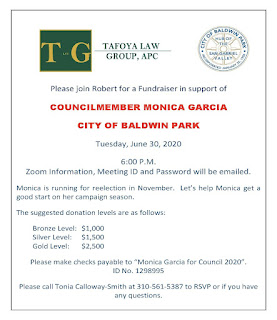 Tafoya holds fundraising events for Council Member Monica Garcia. Email evidence confirms that Tafoya would blast attorneys for money on behalf of Garcia's campaigns. According to Tafoya, $1,000 buys you Bronze standing with Garcia. $1,500 buys one Silver standing. And Gold members require $2,500. But in a representative democracy, are we supposed to pay now to meet with our elected officials?

Furthermore, there's an appearance of a conflict of interest when Garcia votes for Tafoya - who has raised significant sums of money in the past. To ensure the appearance of integrity, Garcia should abstain from voting on any decisions regarding Tafoya.

The Harm to our Local Government and Democracy

It appears that the city council, and other governments, have forgotten their purpose, which is that they exist to serve the people. Instead, career politicians appear to exist for what they can take from the taxpayer and the advantages they receive from selling their influence in office. In the end, the citizens suffer at the expense of the few.

So the decision to keep a questionable city attorney is really a much bigger issue, because it eventually results in the oppression of the common people. For instance, the City Council decides it wants to misappropriate federal housing funds but can't do so without the approval of the city attorney. A good city attorney would object. A bad one would permit it. And people who need those funds eventually become homeless. And as discussed further below, that's what makes this entire political system unbearable and unworkable. In short, a bad city attorney promotes decisions that hurt the people.

Hence, the above problem reflects a crisis for Western democracies throughout the world. As global wealth is becoming concentrated in fewer people, these fewer people, who have been commonly called the one percent, are having greater influence over our politicians and governments. This trend is the antithesis of a democracy, which is supposed to generally result in the greatest good for the greatest number of people.

The second case, as seen here with the political action committee, is Citizens United. In Citizens United, our Court held that corporations are people and hence can spend as much as they want regarding political campaigns.

The consequences of these decisions are clearly proven in local politics here and for sure in higher levels of government. Reform is required. Amendments to our Constitution must be ratified.

Regarding Baldwin Park, Robert Tafoya in office reflects badly on the City. People in government must not only be honest, but they have to have a reputation of honesty too. As has been so often said, "Trust is the currency of government."

Baldwin Park City Council has decided to offer the CEO position to Lucy Garcia, who the City of San Marino fired because of of misrepresentations of the city budget. When Garcia was Assistant City Manager of San Marino, according to the Tribune, Garcia told the citizens and Council of the City that San Marino was making money, when in fact the City was in a deficit of around $2.3 million.

The Tribune states that Garcia perpetrated the misrepresentation by failing to report on a $4.6 million loss that was carried into the fiscal year. The budget discrepancy committed was a common trick played by both corporations Enron and World, to make shareholders believe the company was making money.

Citizen activist, and successful business owner, Greg Tuttle also stated that he was concerned that Garcia had no experience as a city manager and lacked the required formal education. Tuttle believes that a retired corporate CEO should be hired for the job, instead of career semi-politicians.

Tuttle and others are disappointed that the new city council appears to be carrying out a legacy of corruption. Two years ago, the California Controller's office accused the Baldwin Park's administration of failing the audit for misappropriation money and by cooking the books. Although the current CEO is being replaced, finance director Rose Tam was and still is in charge of the budget. Furthermore, former employee of Tam, Suzanne Ruelas, accused Tam in her civil complaint that Tam misappropriates housing funds and misrepresents the budget, presumably in the self-interest of select individuals.

On January 27, 2021, the Department of Justice (DOJ) announced that Ricardo Pacheco pled guilty to accepting over $303,000 in bribe money. The DOJ has also served search warrants on the city attorney, Robert Nacionales-Tafoya.

Citizen activists are perplexed by the City's Council's choice. Tuttle stated, "I hope that the council members would be more thorough in their background search for the next City Manager. The City needs to be honest and hire good people."