Fighting the Police as a Law Student 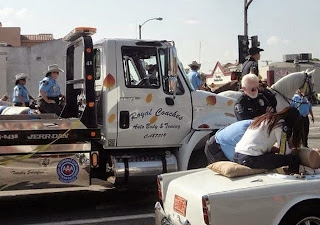 It was my last semester as a law student at UCLA Law School.  Late on a Monday night, I received a phone call from the Captain of one of the LAPD’s Division.  He told me he had read my legal memorandum many times, concluded that the officer pulled over the client without probable cause and then he released her vehicle, waived the impound fees, and told me he would change the station’s impound hearing policy.

When I applied to law school, in my personal statement I wrote that I wanted to attend law school to give a voice to those who otherwise do not have access to legal representation.  The Captain’s call confirmed or me that I had made the right choice to change my life course and pursue a career in law.

This case came to me because I am enrolled in a client-counseling clinic at UCLA Law School.  In these clinics, we get hands-on legal training with real life cases.

In my most recent case, I advocated for a Mexican woman whose car had been impounded for 30-days because she does not have a California driver’s license.  On the day her car was seized, she was driving to court with her two year-old child to get a restraining order.  Her ex-boyfriend and father of her children had attempted to kill all of them in a mass suicide.  With all of them in his car, he crashed it into the center divider of the freeway.  Somehow, even though the car was totaled, everyone survived.

On her way to court to get the restraining order, a Patrol Officer ran her license plate in his database and discovered that a previous owner of the car, named Nicholas, had a current arrest warrant for not showing up to traffic court.  Even though she did not commit any traffic offenses, he still stopped her.

After the Officer pulled her over, he clearly saw that the driver was a woman with a child.  He asked for her driver license.  Because she did not have one, she gave him her Mexican Identification.  He cited her for driving without a license, had her car towed, and placed a mandatory thirty-day hold on it.

The impound fees for a 30-day impound typically run close to $2,000, and often outstrip the value of the car.  If the car’s owner does not pay the impound fees, the tow yard can destroy the driver’s credit by sending it to collections.

Although I recognized that my client didn’t have a California driver’s license, she was in an exceptional situation, in which she was fearing for her life and the life of her children.   A 30-day impound was a disproportionate, unjust fit for driving without a license.  She is a single and poor mother, who would have to pay close to $2,000 or have her property sold at public auction.  With already having to support herself and her children, how would she ever pay this?

Furthermore, this was my third clinical case where I witnessed an officer violating our Right to Privacy guaranteed under the U.S. Constitution.  My second year Constitutional Criminal Procedure class taught me that an officer can only conduct a traffic stop when he has reasonable suspicion that a crime is occurring at the time of the stop.  Otherwise, the temporary seizure violates the driver’s Right to Privacy.

This stop was a constitutional violation.  There were no facts to support that the officer believed the female driver was the previous owner named Nicholas.  It was pure speculation.

Even if he could make up some facts that he had more than a hunch, he should have abandoned his investigation the moment he saw that the driver was a woman.  The name on the warrant was for a Nicholas, clearly a male name.  There was no way my female-client could have been this Nicholas.

That brings me to my next point though: the mandatory thirty-day impound policy encourages racial profiling.  I requested an internal police impound hearing for release of the vehicle.  Yet, before I argued it, I consulted with my trial advocacy clinical professor.  His advice would help me exploit the officer’s racial bias during cross-examination.

At my hearing, I began my cross-examination of the officer.  The officer gave evasive answers, so that I wouldn’t lock him down regarding his problem with having no reasonable suspicion.  Yet, as I learned from the trial professor, evasive answers lead to inconsistent statements.  Get them on record and then exploit the biases and inconsistencies.

The first inconsistency exposed the officer’s political agenda of targeting the Mexican community.  The officer said he never inquired into where the driver was going or into the urgency of her situation because he spoke no Spanish.  Yet, he said that his law enforcement experience taught him that Nicholas could be a female name.  How could one know so much about Spanish names, when one did not speak Spanish? He would use any weak justification to pull over Latino drivers.

The second inconsistency showed that the officer what he believed about Mexican sovereign documents.  In my cross-examination, I asked him , “Why he didn’t abandon his search when he saw the name on the Mexican ID?”  He said, “The LAPD didn’t accept Mexican IDs as valid per its policy.”  I asked him where that was in the LAPD Policy.  It wasn’t in the policy.  I stressed that it was an acceptable form of ID for the Federal government.  Therefore, why wasn’t it valid for him? His only justification for believing that sovereign documents from Mexico were unreliable was that it came from Mexico.

Although it was clear I should have won that hearing, the Division detective adjudicated against me, refusing to release the vehicle even though the officer did not have probable cause for the seizure in the first place.  At that point, I informed my supervising civil rights attorney.  She asked me to write a legal memorandum to address the Division’s unlawful decision. Memorandums are objective briefs that outline the facts, the law, and then describe how the two link together.

To write that memorandum, I drew from everything I learned in my first year lawyering skills class, which focused on legal writing and research.  Together we proofread it and then sent it to the Chief of the LAPD, Charlie Beck.  They wrote back that they would investigate. The next business day, I received the call from the Captain, who reversed the adjudicator’s decision. It was good to know I helped out a nice mother, but, even more satisfying, that I was able to change an unlawful policy.

My colleagues from my previous career often ask me if I had made the right decision to go to law school.  My last case as a law student showed me I did.  That was my final assignment for that class.  The lady ended up changing her phone number; I wonder if I'll ever see her again.
Posted by Paul C. at 8:24 PM No comments: 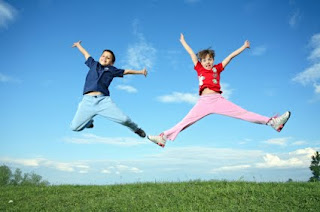 A lot of you have followed my blog since I left New Zealand.  Hasn't time gone by fast?  Today is the last day of my law school classes.  What that means is no more formal education!  That's it.  I have nine years of post high school education.  9 years!  That doesn't include when I started pre-school at 4.  Today was the last day of class in my entire life.

Also, the final class of my formal and professional education, was anticlimatic.  No fanfare.  No food.  Nothing special.  No powerful speech about being great human beings.  It was just a regular class.  I remember the last day of class from my 1L professors more.  It was all so much more dramatic then.

A lot of my classmates are ready to be done.  If I took their charted course, I would be too.  Many of them took the same type of classes that resemble 1L year, tax, business association, etc.  You can do that.  And if you do that for three years, it'll get boring real fast.  Hence the saying, 1L they scare you.  2L they work you.  3L they bore you.

1L scared me.  2L worked me.  3L worked me more.  This has been a strange year in general.  I think I really enjoyed it though because it was entrenched in practical experience.  I served the poor and won a lot of hearings.  I did three clinical classes, where I learned depositions, opening statements, closing statement, directing witnesses, cross-examining witnesses, interviews and negotiations.  There are a lot of skill sets there.

I lectured in France.  I taught undergrads and wrote two pieces that are getting published.  I have two or three more that will hopefully be picked up for publication.  I won a number of hearings for the most prosecuted, persecuted, and invisible members of society.  I had a police policy changed in the LAPD.

So - lots done, lots of stress, lots of pain, and lots of fun.  My next post will be on my most recent police impound hearing.

The City of Demons 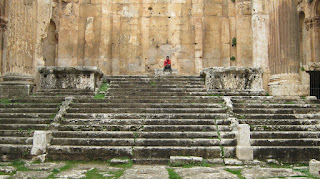 The First and Second Kings describe a god called Baal, "false God." It was originally worshiped by the Phoenicians - who were also the people who did come up with the alphabet system. 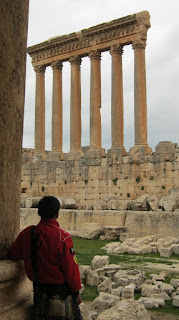 From Bcharre, the road to Baalbek was closed. So, we had to make a complete loop down the mountain and come in from another road. A one hour journey turned into a five hour one.

The Phoenicians first dedicated the city to their God Baal. Then, came the Romans - who dedicated it to Zeus. Then came the Christians, who sanctified it to the Christ King. And then, the Muslims took it over, and made it a citadel when the crusaders came.

I really enjoyed exploring these ruins. I felt like a kid again in some ancient Legoland. This was the good part of not having tourists. There weren't people crawling around everywhere. It was just me and the ruins and the time to reflect on them.

It was so impressive to touch stone that was over 2,000 years old. Apparently, it took 100,000 slaves to build the place. Also, the Phoenicians apparently sacrificed people in this temple. That practice stopped when the Romans came, but temple prostitutes were always about.

The first picture shows me sitting on the alter of Jupiter. Now, it's the alter to the Ferrari god. =)