My blog is mostly known for its words, but in this case, I want this post to be known for a picture.  A lot of you know, I come from a small ghetto city in the San Gabriel Valley called Baldwin Park.  The last thing, I ever wanted to do was come back here.  But I guess the Chinese are right, "Falling leaves return to its roots."

I don't have much to write this week.  But as the cliche goes, "A picture is worth a 1,000 words."  Now you know where I grew up in, where I learn boxing, and where I've come back to.

Picture taken by Paul Cook with permission from the participants. 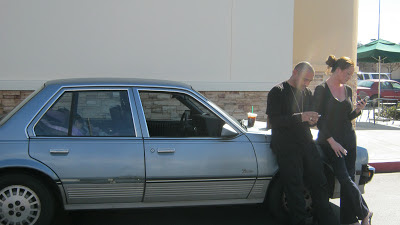 I entered the boxing gym.  The head coach smiled at me.  It struck me as odd.  Why’s he smiling, I thought.  “Good day.”  I shook his hand and went to see my personal coach.
“Hey Coach, can you wrap me.”  He holds my right in his left and wraps with his right.  He holds my left with his left and wraps with his right.
“Into the ring,” my boxing coach, Luis said.
I stepped between the ropes and went in.  You said, “Fly like a butterfly.  Well, that’s what we’re learning today.  You’re going to dance inside that ring.”
He shouted commands at me.  Left.  Right.  Forward.  Backward.  Pivot.  Left.  Right.  Backward.  Forward.  Pivot.  Pivot.  Left.  Right.  Pivot.  And so it went.
At first, it was difficult because my head had to process the instructions.  But like picking up the rhythm of a song, I was starting to feel more of the glide in my feet around the ring.  The old coach came up and said to my coach, “Hey – he’s coming along.  You did a good job with him.”  From my peripheral vision, I caught the younger coach smiling.
The older one said, “Look at his balance.  Center of gravity.  Everything’s good.  Good.”
And then, the head coach looks too.  For a moment, I felt like time stopped.  The informal coaches and the formal ones and the younger kids had their eyes on me.  They were thinking, who is he?  He came from Baldwin Park.  Why does he train so hard?  He doesn’t need to.
I made a mistake now and then.  I bounced back from the intense pressure of being watched at those moments without thought.  All the years of law school humiliation I suppose does that to you.
In the corner, was the-other-Asian-guy, the one who hated me.  He looked angry, like an abused and stray village dog.  He too knew I had made progress.  Progress.  He’s been there for years ignored and neglected.  Now, I show up and in 5 weeks, I was coming along – along fast.
“Alright,” Luis says.  “Out of there.  Go to the mirrors.  I have some drills for you.”  So, I go and do them.  My coach leaves me.  I practice for what seems to be forever doing the same thing over and over again.  Repeat.  Repeat.  Mistake.  Try to Fix.  Fix.  Repeat.  Repeat.  Mistake.
My white shirt begins to soak through with sweat.  Hugging my skin, my torso show like a girl’s breasts do in a wet t-shirt contest.  My hair is wet.  When I shake it, pearls of sweat fall on the black mat, scattering it like morning dew on blades of grass.
How much more of this am I meant to do? I think.  No one is watching.  This is boring.  More and more, until you master this.  Got it?  Good.  Because nobody will stand over you watching you in life.  Learn that now.  And most of mastery is boring, will be boring, and boring is what you need to endure.
At some point, the head coach comes towards me.  So, I wasn’t being ignored.  Luis is with him.  The head coach is smiling.
Luis has two red, shiny, boxing gloves in his hands.  He presents them to me with a smile as well and says, “Put these on.”
In the moment I should’ve said thank you, time just passes and passes.  The words choke in my throat.  Say something.  I can’t.  I don’t know why.
The head coach, instead says, “Look at him.  He’s literally speechless.  Come on, Man.  Put them on.  You knew they were coming.”
I wish I could’ve hugged them both.  I wish I could’ve said thank you.  I wish I could’ve said anything.  I mean, of course I feel grateful, but come on, I don’t deserve these.
“I guess this is means the big ‘C’ word.”  Luis gives me a look that shows me he doesn’t know what it means.  Either of the C words.
Head coach says, “That’s right: Commitment.”
“Haha,”  I said.  “Someone who knows from experience the fear.”
I take the gloves.  Put them on.  They fit snuggly.
Luis asks, “How do they feel?  Good?”
“Yeah.”
“Well – let’s get you started on the bags then.”
The players, the formal coaches, and the informal coaches, see me and the gloves.  They look and know and talk amongst themselves: the China man is here and seen but where is he going.
At the end of practice, people I’ve never met introduce themselves to me.  I walk to the parking lot with the coaches and the teenage players.  One of the high school kids asks me, “What do you drive?”
I ask him back, “What do you think I drive?”
He looks at all the cars in the parking lot and says, “It can’t be the BMW Z3.”
“Hey, come on coach.  Let’s go.”  I walk over to my shiny, black BMW Z3, open my trunk, and put in my gym bag.  I look behind and see the boy speechless.
“Let me give you a ride, Coach.  It’d be my pleasure.”
Posted by Paul C. at 5:39 PM 1 comment:

Apparently, when Buddha was about to die, he bid the animals to wish him farewell.  Only 12 showed up, one of which was the snake or the naga.  Of course naga would show up because the two had an intimate relationship.  It is said that when Buddha attained enlightenment, the rain began to pour on him.  A giant cobra, sensing that Buddha had reached infinite wisdom, raised itself above him, flared out its hood, and protected him from the rain.  In another ancient story, the naga transformed into a human and begged Buddha to allow him to be one of his monks.  Buddha, however, said no because he was not a human.  But for his devotion, would remember the naga forever.  Hence, he named his acolytes nagas.

Not that I'm into the zodiac or superstition, but I do recognize that this is the Year of the Metal Snake.  In the Christian culture, the snake has its role not in the enlightenment of mankind, but sadly its downfall.  After all, Eve plucked and ate because of the serpent's cunning.  Well - one thing is clear to me from the role of the snake in the Christian and Buddhist Scriptures: it represents hidden and sacred knowledge.  In the Buddhist version, a freeing one, and in the Christian one, an enslaving one.  I accept on those terms, this then has to be the Year of Wisdom.

In 2011, I called it the Year of Champagne, in which I wanted every month to be a celebration.  2012, I didn't really have any goals listed, except it was a year of New Opportunities.

I would say 2012 in review has been a bittersweet one.  I entered the year with a strong sense of enjoyment, fun, and celebration.  Halfway through it though, the seas changed on me and the gods of the air changed their fortune against me too.  So - I'm not sure what to make of this year - except, as usual, I can say I learned a lot.  I grew a lot.  I dared a lot.  I suffered a lot.  I made a lot of mistakes.  I corrected a lot of mistakes.  I loved.  My heart broke.  My heart mended.  I saw the world.  I saw its wonders.  I learned her knowledge.  Therefore, I conclude: I must have lived.

This year, I'm not really sure what my goals are.  I had three goals in 2011, and I was quite surprised to revisit my blog post to see I actually achieved them.  How many people could actually say that?  I didn't have any listed goals in 2012.  So, I think it's time to come up with some targets, and we'll see in a year again if I made it.  A year is a long time to wait - at least for me.

Let's see how far I get with these 7.  The Greeks and the Jews believed that being familiar with snakes produced the antidote for venom.  It's not a pleasant way I suppose to be healed of what afflicts you, but hey - it is what it is.  Perhaps, my seven goals and my pursuit for knowledge and wisdom will replenish my soul.

A lady at the local drug store rang me up and gave me a discount she shouldn't have.  I didn't know at the time I wasn't supposed to get the discount.

I returned a week later.  Her loser of a supervisor, a balding, fat white guy, rang me up.  The lady clerk was right by him.  I said, "Where's my discount?"

"Your employee gave me one before."

"And who was that employee?"

I glanced at the clerk who looked a bit nervous.  I took note of her worn eyes and that she was an older woman that needed to pay the bills.  She was waiting to see what happened.  I didn't want to lie either.

He gruffed and denied my discount.

I came back a week after that, and the clerk was there.  And she rang me up.  I looked at the receipt and there was the discount.  I smiled.

"You know, I didn't say anything."