We move onward to Bavaria.

Bavaria is the south of Germany. When I arrived at my destination, I am in the train tunnel. From behind, as I am walking, I hear a familiar voice say, "Paul!" I look behind, and it's my host brother Tobi. He looks somewhat older. He hugs me. We immediately start catching up on things. 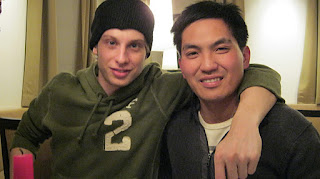 It's a picture of Tobi and me after a few beers. I think you could tell.

Back at the Bavarian home, I meet Tobi's mom and give her a hug. I present her with some nice gifts. We catch up a bit, and Tobi outfits me for our ski trip to Northern Italy. 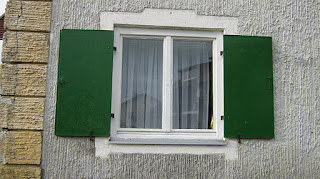 We go and pick up one of Tobi's best friend's Mattias. Here's a picture of his fantastic dog. 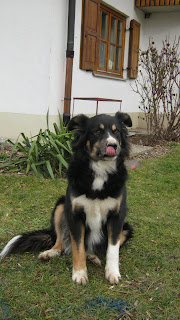 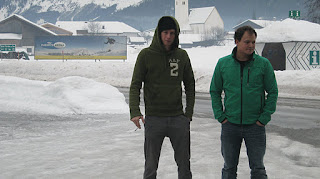 We get in the Audi Station wagon and head towards Northern Italy. On our stop for petrol in Austria, I finally see the white snow blanketing and layering it all. I jump out to take a picture and fall into three feet of snow. Swoosh.

When we enter Austria, the Bavarians open up four liters of beer for each of us to drink in the car. I asked, "Isn't this illegal?" And they said, "Not in Austria." We clanged glasses and said, "Cheers" and drank on our road trip to Italy.

For lunch, we stopped off at a McDonalds. It was the most amazing McDonalds ever, carved into the Austrian Alps. I had a cheeseburger. It cost one euro. It tasted exactly the same as one in America. 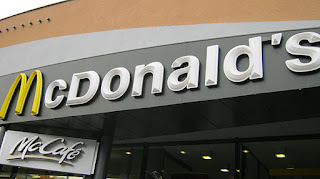 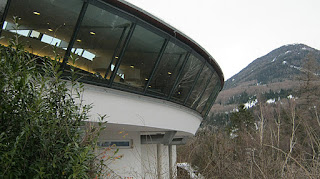 We finally arrived into Northern Italy, at the skiing village. It looked exactly like Bavaria. I thought the Germans should just retake this area again.

Tobi's father lead us to our sleeping quarters, which was his trailer actually. 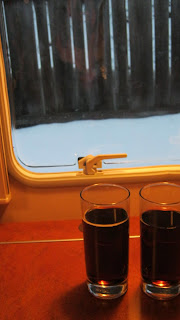 Biers from the trailer.

Here are some pictures of the village we were in. 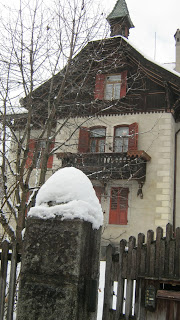 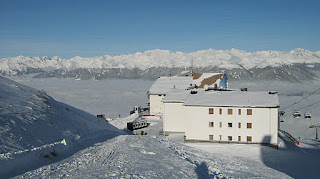 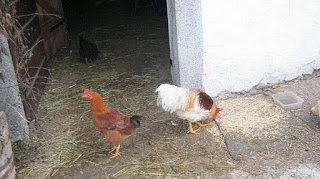 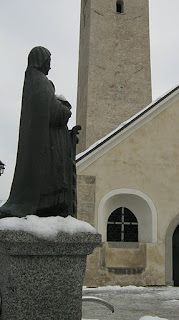 So, we did a lot. Ski. Eat. Drink. Drink. Sing. Sing. Drink. Eat. Ski. That was it really. But, I guess there was so much more that happened. This is a story of teaching and learning as well.

Some of the food we ate, was freshly baked Italian pizza.

Tobi, who is younger than me, excels in skiing. I suck. So on day two, he took me to the kiddy slope. There were so many kids there. It was quite cute to see 10 three year olds, who could barely walk ski.

Tobi went before me and gave me each lesson one by one. "Not bad," Paul he would say. I would follow his ques. "You'll do a curve now. Shift your weight to the side of the curve." And so the lessons continued.

"You're doing good, Paul. You haven't fell once."

Tobi was telling the truth. As you can hear the sincerity in his voice. I gauged him as a teacher. He was the encouraging type. I wouldn't teach this way. We just have different personalities. I think I'm the type that just pushes you until you can't go any further. My way is not as pleasant as Tobi's.

Other times, I would talk with Tobi's Dad.

He spoke broken English. I spoke broken German. Between the two languages, we communicated. I would describe the word in German, when I had a difficult English word. For instance, I was talking about borrowing money. In German I would say, "It's when a person needs to go to the bank and ask to get money. Then he pays the bank back more." He would say, "AH, yes that word is blah blah blah" in German. In doing such, I was learning new German words. I was getting better and better at the language, so the gap between him and me could get closer.

What struck me most about Tobi's Dad is how much he enjoyed being a dad. He enjoyed watching Tobi teach me to ski, as he taught Tobi to ski. He liked us all shouting when we drank too much and laughing. He would help me put on my ski boots and found pleasure in me having a good time. He would even empty the waste compartment of the trailer, as dutiful as any good soldier. It was quite nice to see a father like this.

We ended up talking about Angela Merkel, Tobi, and much much more.

We also drank a lot each night. One night, I was struggling to stay awake at the bar. The other three had a hang over, but the nights would start over and over again.

This is what resulted!

This vacation is ending now. It's went way too fast, and it was too short.

But before it ends, tomorrow, I head off to the small state of Luxembourg.
Posted by Paul C. at 2:07 PM