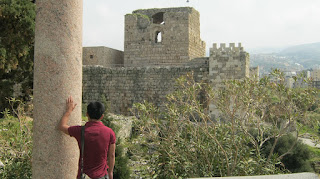 I almost got killed in Lebanon. I was in the mountains of Lebanon when a bus driver honked his horn. I jumped left, avoiding the bus that nearly smashed me. He had plenty of room to swerve, but, no he wanted to run me over. The most dangerous thing in Lebanon has to be the traffic and not the terrorists.

Anyways, I really enjoyed my trip to Byblos. (Picture above). Lebanon was an important place in antiquity. Because it borders the Mediterranean Sea, it was often a prize for the ruling world power. Because of the sea and its regions, Lebanon was a gateway for Asia, Africa, and Europe.

So, it's no surprise that the Egyptians wanted this place. Alexander the Great did. And so did the Crusaders. But now - there are no tourists. It's like an empty ghost town by the sea. None the less, I loved exploring the Crusader Castle. I felt like a kid again.

In any event, tomorrow, I'm headed off to the City of Baalbak - the City of Demons.
Posted by Paul C. at 9:47 PM