Thoughts This Week: Serving Food and a Fever 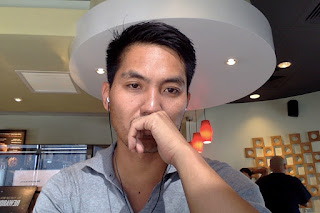 Earlier this week, I had chills. Although I felt cold, I knew I was hot. I had stabbing pains in my right shoulder blade. I pulled the blankets over me; I sweated, until my blankets were soaked.

My mother came in and asked: "What's wrong?"

She felt my head and said in anger, as if it was my fault: "How'd you get that?!"

Truth be told, it's been a long time I've been in bed with an illness. So, I kind of liked it, especially because it didn't feel too serious.

In bed, since I had a fever, I read John Donne's 17th Century poem, The Fever. It's about a guy, who is watching his lover die from a fever.

My favorite lines are as follows:

These burning fits but meteors be,
Whose matter in thee is soon spent ;
Thy beauty, and all parts, which are thee,
Are unchangeable firmament.

It means: "Your burning, fever, spells are like meteors, and like meteors, their stay in your body is temporary. But your beauty and everything, which are you, will remain, like the foundations of the earth."

Knowing Donne, a metaphysical poet, I'm sure that the poem represents more. Probably something about how the fever cleanses one's soul and brings one closer to God.

At the time though, I wasn't in the mood to analyze the entire poem about how illness, lovers, and the world brings one closer to God. After all, my body was ablaze inside.

I fell asleep for 12 hours. The fever broke at some point. I felt better in the morning. And after a few days, I felt much better.

We're still trying to figure out what that fever was about and what brought it on. We're guessing it's food poisoning. But, we'll never know for sure.

I have to say, I felt cleansed, just like the poem said I would be.

It almost felt like a heavy and ancient, evil spell came out of my soul, and I was released from its caster.

In the latter part of the week, I cooked for my friends, who just recently had a baby. I tossed the spices in a warm pan and stirred it.

He asked, "What are you doing with the spices?"

I answered, "You should always roast them before using them. It brings out all the flavors."

Soon, the kitchen burst into smells of warm and hot spices, as if we were in an Arabic mother's kitchen. I loved it.

I made them a meatball recipe that came from Jerusalem. It was enjoyable for all of us. We paired it with lovely and full flavored wines. The food was so good, we were picking at the food, before we sat down and ate. When I came home, I wish I had more to eat.