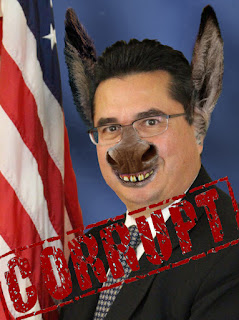 Greg S. Tuttle, local business owner, filed a lawsuit yesterday agains the City of Baldwin Park, for violating his Free Speech Rights, because it has threatened and issued a citation for having a sign that criticizes Baldwin Park's Council Member Ricardo Pacheco for being corrupt. The lawsuit asks the court to strike down Baldwin Park's laws on signs, because it violates both the state and federal constitution, which guarantees free speech rights to individuals. It also asks for a temporary and permanent restraining order, which would seek to stop Baldwin Park from citing residents whom wish to hang the Pacheco sign. Finally, the lawsuit asks for damages and attorney's fees.

The public officials have had a hostile stance towards the residents' rights, which guarantee them the freedom to speak out against public officials' corruption. In July of 2014, Mayor Manuel Lozano attempted to get a restraining order against the attorney and activist, Paul Cook, who was leafleting at Morgan Park against the Director of Parks and Recreation, Manuel Carrillo. The court criticized the City of Baldwin Park and specifically told it, "You know that he [Cook] has Free Speech Rights." The Mayor's lawsuit was dismissed against Cook.

Then, Cook sued the City of Baldwin Park in federal court for retaliating against him for his exercise of Free Speech, because the City arrested him, had a woman officer strip search him, and threw him into jail. After the filing of the complaint, the City settled with Cook for $67,5000.

Then, when Greg Tuttle began investigating the City's business practices in luxury hotels and restaurants in Santa Barbara, Council Member Ricardo Pacheco also filed a temporary restraining order in order to halt his investigation and discredit his findings. Mayor Lozano and Council Woman Monica Garcia followed. Cook defended Tuttle in court and had all three lawsuits dismissed. The court told Ricardo Pacheco to his face, that being a politician comes with such criticism, and that he needed to grow up or move on.

Since then, a number of residents have been angered over a number of votes that Council Member Pacheco has cast, which they believe has been fueled by receiving bribe money. As a result, these residents have been plastered banners on their building with a portrait of him as a donkey. The banner has stamped on top of it the word: "Corrupt."

(Not only have residents been complaining, but former women employees and two Council Woman are also complaining that they have been either physically or verbally assaulted, because they were women, by Ricardo Pacheco.)

In response to the plastering of the sings, the City of Baldwin Park then ordered code enforcement to warn everyone with these signs to take them down or be fined. When they did not take them down, code enforcement fined these residents. And when they did that, Tuttle's attorneys: Carol Sobel, Fred Zelaya, and Monique Alarcon, filed a lawsuit in federal court to protect Tuttle's and other residents' Free Speech Rights.

The Mayor and City Attorney have stated that these lawsuits hardly affect the City because the insurance company pays the damages anyways. Therefore, it appears that the City has taken a stance that they're going to violate law, until an actual lawsuit materializes and results in a court order. And even when the court issues an order, like in the Casas' lawsuit, the City has still chosen to violate them.

Nonetheless, it doesn't appear that the City's strategy is working. In the last few years, the City has been deluged with lawsuits. What's special about this lawsuit is that it's the first lawsuit in the City's history attempting to invalidate a law the City has enacted. In other words, if Tuttle prevails in the lawsuit, the court will effectively tell the City it doesn't have the right to make illegal laws or enforce them.

The next step is that the City will now have to respond to the lawsuit. We'll see what happens.