Conversations with the World in a Peruvian Beach Hotel 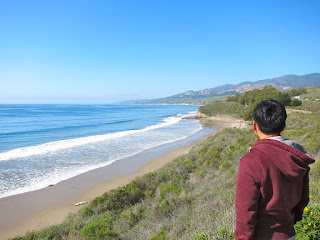 The Peruvian grandmother, who worked at the hotel, was excited one morning and was telling everyone that she met some Mexicans. I asked her, "What did they want?"

"To take a shower," she answered.

"And did you charge them?"

After telling me, she went around the hotel telling people that she met some Mexicans, who were asking for a shower.

I haven't met any Mexicans in Peru; so, I guess it was rare for them to come this small beach town.

On the weekend, the hotel had a full house. And full houses bring a new life to a place and gives it a different energy. It becomes alive.

Another day, a 27 year old Australian guy from the Northern Territory came. He was tall and had a clueless feel to him.

He talked to me some. I told him I went to the Norther Territory before. (For those of you who don't know, it's just south of Indonesia.) It's sweltering hot, and Crocodile Dundee was filmed there. The capital is Darwin.

I found out he was an electrician.

Grandmother tried to speak to him in Spanish. But because he was only traveling for a few months, he couldn't communicate well with her.

One day she asked me in Spanish, "Where's your Australian friend?" We speak in Spanish.

"That's because he's Australian. You know, Americans are smarter than Australians." (I should have also told Grandma that originally, criminals founded Australia.)

"Yup, Americans are smarter than them." I smile. (Being that I'm part New Zealander, I have to do my duty for Australians. We used to say at work that when Kiwis left New Zealand, that they did the world a favor. The average IQ of both countries went up.)

Another day, a French couple comes. They're older, in their 60's. I liked them.

I met the wife first in the kitchen. I was drinking a glass of Chilean wine. I liked her. She could have been any mother of a white picket fence community. It was like going to my friend's house in the suburbs and having dinner with them. I poured her a glass and offered it to her.

She took it. Drank it. Liked it.

We talked. She told me about her travels in the Pacific. How they lived in France. How they were tired of traveling for several months and didn't want to go to the nearby tomb museum. (I mentioned it on the blog post.)

I told her I went to France. I lectured in Aix en Provence in the South. But I didn't tell her what I lectured on.

She tells me they're from the South as well.

After dinner, her husband met me in the lobby. I offered him a glass of wine. I offered her another glass. They both took it. Drank it. And liked it. The husband looked a lot like my lawyering mentor.

They traveled most of their lives. They asked what I do.

I smiled and asked him: "Why?"

He then tells me something cool: "I told myself when I die, I want to say I knew the world. So, that's why I travel a lot."

They're very lovely people. I keep pouring the wine until it's all gone. They speak good English and tell me about their time in the Pacific islands. They lived and worked near Fiji. They told me their favorite places.

They're scuba divers. They retell me their favorite dive sites.

And the husband says, "There's a great one in Australia. I forgot the name. It's off Townsville."

"The Yongala?" I ask. The Yongala is the ghost ship wreck. The huge boat got caught in a storm and sank it. The crew all died. It landed in a place with many currents, and turned into a kind of reef. The fish and other animals grow to epic proportions. Apparently, you can still see the skull of a crew member on the wreck, though I didn't see it. I did, however, pick up a sea snake (the most venomous snake in the world) that was almost as thick as a coke litter bottle. The fish were as huge as a VW beetle.

"That's it," they both say. They're smiling and happy I recalled it for them.

"That's my favorite dive spot. I did it twice. I was in my early twenties then," I say.

"Oh, we did it too! It was great! The fish were just huge," the wife says.

I think what's the odds I met someone who dove perhaps the greatest shipwreck in the world. They told me about other shipwrecks they did, but they still loved the Yongala the most.

I said, "The problem with me is that I dove all these great sites when I was younger. I was doing my field work in Australia then. Now, everything isn't as great as the places I started in.

The wife says, "Of course, but we gave away our good coffee in Cusco. It's the end of our trip."

We chat until we're tired and ready to go to bed. Then, I say in French: "Good night." And hug them.

Grandmother watched our conversation. Even though she doesn't know English - it appears like she got the gist of what we were talking about.

The next morning, I wake up late, which is usual. I can't find the French couple. I go to the kitchen and brew some coffee.

They find me in the kitchen. The lady says, "We tried to find you. But the hotel owner said you were still sleeping."

They laugh. I laugh too. "What about coffee?"

They gave me breads, and she says, "We got this for you. It's very good bread."

My heart warms up, and I say, "Thank you very much. You didn't have to do that. Let's have a seat at the lounge. I'll pour you some more coffee. There's never enough."

I take three cups and the coffee pot. We walk to the dining area. I pour all of us a cup of coffee.

The husband tells me more about his life. The wife marks up my guidebook and tells me where to go in Peru. She writes down her contact information and tells me that if they're in, to visit them in the South of France.

They tell me they're going to the Tomb museum after all.

We talk more, but after awhile though, it was time to say good bye.

I tell them in French, "Until we see each other again."

The wife says, "Oh, you speak some French."

I tell her, "Just a little. Some French tourists liked me on the Galapagos and started teaching me French."

We kiss and hug and say good bye.

One day, the owner of the hotel gives me a ride to the two neighboring villages. It was there, I wanted to get to the bottom of it.

I ask him, "How did Isabel lose her land?"

"The mafia took it."

"But how? I didn't understand her."

"They falsified papers and claimed it was really their land."

"Why didn't she get a lawyer?"

"Because the courts are controlled by the mafia. You need to watch the movie on Pablo Escobar to understand how it all works."

That's when I finally got to the bottom of Grandma's story.
Posted by Paul C. at 9:10 AM