My Days in Cuzco, Peru 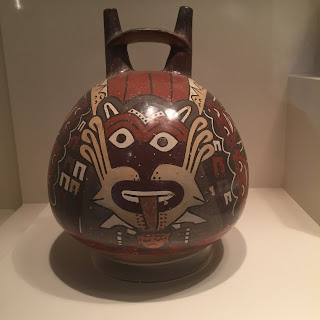 The first night in Cuzco, a girl was moaning so loud because she was having sex in a bed with a guy at 1AM in a shared room of 10 people. She was so annoying, that I walked passed her bed on my way to the restroom and told her: "People are trying to sleep." She didn't stop.

So, the next day, an English guy and I were having a nap (because I was tired from not having enough sleep because of her), but she was talking obnoxiously on the phone with her mother. Why couldn't she take it outside?

That night I ate at a nice restaurant, but my boss from Trujillo (Northern Peru) asked to see me while I was eating dinner. I packed up my alpaca steak and saw her. That was nice to talk to her and see her. We chatted a lot about business and some ideas I had for it.

After, I went back to my hostel and asked the French volunteer at the hostel to put my food away. I saw the girl in my room and told her that it'd be more respectful if she went and talked outside next time. She said that she didn't know and that she never stayed in a dorm before.

Then at 1AM she was chatting up another guy (a different one) in our room. A number of people told her to go talk outside, but she wouldn't listen. Then, after I told her to go outside, she finally did.

The next morning, I was tired again. My food went missing. I confronted the French volunteer. After questioning him, he gave me a half confession. $16 USD down the drain, all because he got drunk, got hungry, and stole my food. I had enough.

I wanted to talk to management. I explained to them what happened and that I was not happy. The French volunteer found out about my complaint and started drinking early in the morning. He kept trying to deflect all the problems on crazy girl. I told them I was leaving, and this was a terrible experience.

Management handled it well. The main manager made everything better and gave me some money to buy another dinner. They forced crazy girl to get her own private room and they moved me to a better room for no extra charge. It was a win-win for everyone except for her and her new hookup - who had to pay a lot more for a private room.

Other than that, I haven't done much in Cuzco, except eat and drink cappuccinos and see museums. I posted a picture of one of my favorite pieces. It inspired me. It made me want one of Jeh Pan - my cat at home.

The museums were great though. I think it really helped me understand how to revise my short story - which for the moment I've lost interest in.

Later, at the hostel, the girl confronted me and said, "HOW COULD YOU SAY THOSE THINGS ABOUT ME???!!! I'M A CATHOLIC."

Right, I thought. Like I haven't heard that one before. That's why no children are born out of wedlock in Peru.

I tried to talk but she wouldn't let me.

She then said, "MY LIFE IS MISERABLE NOW BECAUSE OF YOU!!!!"

I said, "This isn't a conversation." And I ran out of the hostel. She then started screaming at the staff about her story. But she was checking out.

The French guy offered me some beer later. I guess it was his way of trying to say he was sorry. I took some. I don't know if I forgive him completely. An apology also requires that he make things the way they were before the error. And he didn't do that, though the hostel did. And I like them for it.

Later at night, even though crazy girl checked out, she came back, looking for me. This time, she said, "I'm sorry that - "

I just walked to another room. She seemed unstable to me. And indeed she was. Apparently, she started screaming at the staff again, and they finally kicked her out and prohibited her from coming back. The inside joke is she behaved this way because she's from Lima. But so is one of the girls at reception - who laughed too, but said, "HEY!"

Later, I felt bad for her. Not that I or the hostel did anything wrong. But it made me wonder if she had mental health issues.

The new room was better. It was super dark; so, I sleep well.

I ate at a better restaurant yesterday. But the food was so terrible, because I ordered octopus, and it wasn't fresh and it tasted ugly. I told the owner, who looked drunk with glazed eyes, and he got defensive and said, "If you don't enjoy, you can leave."

I said, "So, you would rather me not tell you now and you'll find out about it later in a review." He threw up his hands and stormed back into the kitchen.

I started writing up my review on my computer. Then he said, "No computers allowed in the restaurant!"

"Ok," I said and packed away my computer in my bag.

So - not a great introduction to this city. Hopefully, it gets better.
Posted by Paul C. at 9:47 AM