On an Island in the Caribbean Sun 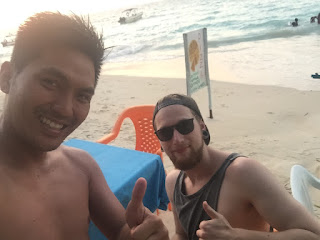 So, Tobi, the German; Alex, the Frenchman, and I, the American all decided to go to a little Colombian island off the Caribbean - where the water was warm and clear and a turquoise blue - the kind of sky blue that only exists in the tropics - and the sea breeze felt so good underneath the hot and blazing sun.

Remember Tobi? We saw some ruins together. They took a two day journey from Venezuela to come see me in Cartagena, Colombia. When they came, I popped open French champagne and celebrated their arrival in a hippie hostel where I stayed for two weeks, which had two dogs, one cat, and one kitty. We squeezed ourselves with an extra mattress in a tiny room, there, in the upstairs room, and in the morning - the hippies played music and sang and dance to practice their street acts for the night.

They told me all about what Venezuela was like. I don't think I'll be going. To me, it sounds like what I envision the end of the world to look like - food shortages, robberies, and constant shootings. Like I said - I don't think I'll be going there. Apparently, people have to wait 24 hours just to get a gallon of gasoline, and  you can't purchase anything without a chipped bank card.

The three of us spent two days together in Cartagena and walked through the streets of the Walled City at night. The hippies played music on the street and sang and dance, while we drank beer outside and watched them. The first night we went out until 3AM and stayed in a hostel with 33 other people. (That's a lot.) On the second night, we went out. They were surprised to walk on the street again and to see foreigners.

Then, we decided to take a trip to a small island on the sun. It was really nice. We just ate and swam and bathed in the warm water and underneath the sunshine and took breaks in our huts. It was really nice - nice indeed. I ran several times on the beach, and I liked it. (You can see the pictures below.) I tanned a dark bronze too.

There's no doubt we were enjoying ourselves in a beautiful, little paradise, where the people served us mixed cocktails, juicy fruits, and fresh seafood. Totally worth doing again.

The place was so remote, they didn't have electricity, much freshwater, running water, or even internet. In fact, to flush the toilet, you had to pour a bucket of saltwater into the toilet. Our hotel turned on the electricity with a gasoline run generator a few nights every day. We were literally in the middle of nowhere.

One night we got food poisoning. We suspect it was the cheese on the pizza we ordered. They don't have proper refrigeration there. So, it probably went bad.

Anyways, doing nothing was good - really good, actually. Tobi tells me, it was necessary for me as well.

Well - they leave today. I don't know where I'm going next, but it'll be where the wind blows. Sorry for the long delay in updating, but there was no internet there. 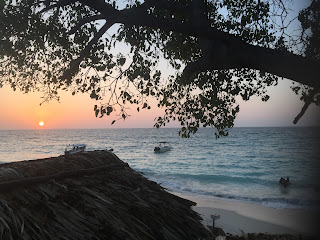 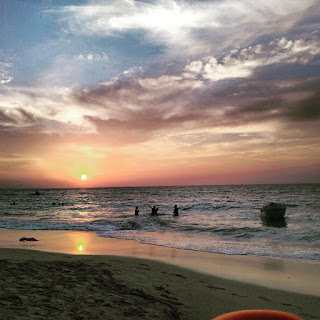