There were penguins all over the beach in the Cape, and you can smell them. Did you know there's only one species of penguins in Africa? It's the Spheniscus demersus, common name African Penguin or Jackass Penguin; they like to hee-haw. Spheniscus, by the way, means small wedge, probably because when they walk they look like wedges. Demersus means to plunge. Being diving birds, they're little wedges that plunge into the water. These particular species are endangered.

My professor in marine biology said that penguins stink, and they do, because they defecate a lot. Apparently, their guano makes good fertilizer. The professor said they're very oily and if you chop off their heads and put a wick in them, they make brilliant candles. The students were horrified at such a comment. 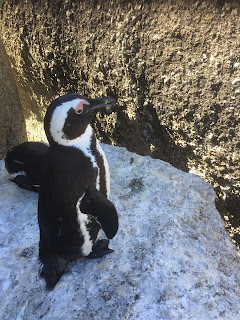 (Did you know that penguins do exist in warm places too? They go as far North as the Galapagos, which is close to the Equator. I got that question wrong on my professor's test and never forgot it. That was 16 years ago!)

The difference amongst these penguins and the ones I saw in the Galapagos and Chile and New Zealand is that they're more into people. They're not as afraid of them. And to take that selfie, the penguin actually bit my sweater but stopped after awhile. When the other tourists saw that he wasn't mean, they also took photos close to him. I don't think I've ever been so close to penguins before.

Besides being endangered, the African Penguin has only two main colonies: Here on the Cape and on the coast of Namibia.

My host said I wasn't that too impressed with them when I saw them. That's probably because I've seen a number of rafts of penguins around the world. 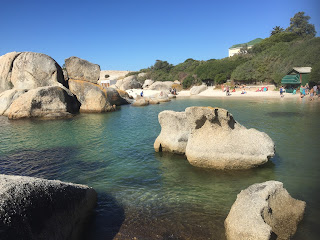 Nonetheless, I have to admit that when I saw one jump into that water and glide in their like a zipping and zagging submarine, I was very impressed. I even saw one catch a fish swimming in the water. He just opened his beak and chased one and clamped his beak on it. Impressive little creatures.