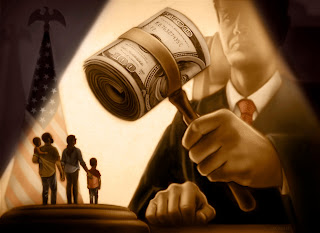 My opinion editorial was published yesterday in the Argonaut News - a local paper for Marina del Rey, Venice, and Santa Monica. It hasn't been uploaded on the site yet, but I appreciate them publishing my article. I've copied and pasted it below for you guys. They published it here.

Private Criminal Prosecution: Contracting our constitutional due process rights to the ultra-wealthy

Chevron began its campaign to war against Dongizer after he obtained an $18 billion judgment against Chevron for dumping toxic waste in the rivers of the Amazon rainforest. The dumping harmed at least five indigenous communities, whose livelihoods depended on this water.

After the judgment, Chevron filed a racketeering suit (a type of charge generally reserved for mobsters). Without a jury, the court found against Donziger. Then, the New York Bar revoked Donziger's license to practice law. The court ordered confidential communication to be released. For refusing, the court ordered one of the longest house arrests in American history. To find Donziger guilty of criminal charges without a jury trial, the court appointed a private law firm, which previously profited from Chevron, to criminally prosecute Donziger.

Although it appears that numerous legal errors were committed here, the purpose of this opinion is to stress the hidden, illegal and trending unconstitutional practice of contracting out criminal prosecution to contractors. The Fifth and Fourteenth Amendments guarantee that the government cannot “deprive any person of life, liberty, or property, without due process of law”. As Donziger’s case proves – without due process – a person’s life and reputation can be ruined.

One of the core rights of due process is that a defendant is entitled to have a prosecutor who is fair and neutral, because of the heavy, scarring, and maiming impacts of a criminal conviction. For instance, a criminal record is a bar to a number of employment opportunities.

There are three rights that a defendant is entitled to from a fair and neutral prosecutor. One, a defendant has the right to decide whether the government should spend its resources in filing the case. Two, the defendant has a right to a fair plea bargaining deal. Three, the defendant has a right to a fair sentence by the prosecution.
Prosecutors are paid on salary. Therefore, since profit is not the reason she is making government decisions, neutrality is presumed. But a contractor, who profits off a case, has every reason to prolong a criminal case, or file a frivolous one, or recommend punitive sentences, which a party like Chevron may want.

There are three ways that contractors can profit from the accused. This happens when they get paid by the hour, are paid more for prevailing against the defendant, or execute decisions with an eye for future contracts with the government. Here, the Department of Justice, the government’s default prosecutors, declined to file charges against Donziger. Because Chevron wanted to circumvent the government’s decision, it hired a law firm that profited by all of the above factors.

In 1987, in Young v. United States ex rel. Vuitton et Fils, 481 U.S. 787 (1987) the U.S. Supreme Court found the practice of private prosecution to be repugnant to due process.  It stated, “That state official has the power to employ the full machinery of the state in scrutinizing any given individual. Even if a defendant is ultimately acquitted, forced immersion in criminal investigation and adjudication is a wrenching disruption of everyday life. [S]uch an [interested] attorney is required by the very standards of the profession to serve two masters.”

But nearly 35 years later, the practice rears its ugly head again to prosecute protesters,  the poor, and civil rights attorneys. In a case I litigated, the City of Baldwin Park contracted a private law firm for $25,000 to charge an 80 year old man for putting up a sign that criticized a politician of being corrupt. The problem was that the City filed charges against the father of the alleged offender and not the person who put up the sign. And get this: the corrupt politician actually and eventually pled guilty to bribery in federal court.

Three years ago and also in California, in “Coachella and Indio, the law firm Silver & Wright has repeatedly filed criminal charges against residents and businesses for public nuisance crimes—like overgrown weeds, a junk-filled yard or selling popsicles without a business license—then billed them thousands of dollars to recoup expenses” reported the Desert Sun. One woman was even charged $6,000 for violating the chicken ordinance.

For all these reasons, private prosecution must clearly be prohibited. Our constitutional rights cannot be decided by corporate interests. Doing so ultimately concentrates powers and rights in the hands of the ultra wealthy, at the expense of the citizen. Having money shouldn't entitle the rich to be able to criminally prosecute people they don't like, just because they have money. For this reason, even Chief Justice Roberts recognized: “A basic step in organizing a civilized society is to take that sword out of private hands and turn it over to an organized government, acting on behalf of all the people.”