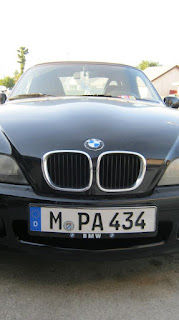 It happened again. Outside, of my house in Hollywood I was arguing with a lady over parking.

I have a sporty, roadster. Such is a great car to have when you have a hard time to find parking. The turning radius is awesome and it's just so agile.

But when you compete with people for parking, the loser hates you. Just tonight, I had an argument with a lady. She had a big white Volvo. We both came to the same parking spot. As she was trying to grab it, I busted a U-y. I took the spot before she could blink. She got out of her car and started screaming, "I fu*(&n hate you. Move your car. I'm going to get your car towed."

I just said, "I don't see this space have your name on it."

But then, I realized, this fight isn't worth it. There's a parking spot just half a block down. I moved. I swore at her before I moved though.

That's my fifth fight over a parking spot in this area in the last two and a half years. One time, a guy said, "You f)(*&)* chinky. I'm going to kill you."

The road rage over parking spaces. But, I won all these battles when we both come upon a spot. Why? Because I have a quicker car. And these people I fight with, usually have a huge clunky machine. I mean, I am so against these huge cars. People should live with their consequences, or so I think.

One time, though, I had beat out another car for a space. I woke up in the morning, and she wrote on my hood in shaving cream: "You piece of sh*t cu* eating fu**er." That's what she wrote. I did think, Get a faster car lady.

My car's been broken into once (it was before all these parking battles). It just made me think, you have no idea what these people are going to do with your car. Broken windshield. Broken window. Who knows? Not worth it. But, I hated that feeling of backing down to this losing girl. I, too, wanted to throw a bier bottle on her car and hoped it cracked and dented it. I think I was angry because you could tell she was the bullying type, and that she screamed and threatened people to get her way. I think if a car beat me to a spot, that's my fault. Right? Speed and fitness beat old and clunky.

I pulled back the thought back about throwing a bier bottle against her car. Why do it? I thought of all the consequences of getting caught. Then I asked myself, would you throw that bottle if you wouldn't ever get caught? I decided, better not. Making those choices makes you a worst person - slowly but surely.

On our trip back from wine country to Santa Barbara, the lux guy Paul and I had to meet with my friend Albert. I hadn't seen Albert in over 10 years. We were looking for a parking spot. But none to be found.

I told him, "I wish we had the roadster. We could easily beat people to a spot."

I told him the story about the girl who had used shaving cream to write the foul slogan.

I then said, "Hey - survival of the fittest."

"Well, I knew a policeman. He told me this story. A young man in Luxembourg had a porsche and an old guy with a big Mercedes and him were fighting over a parking space. The guy with a porsche was quicker and got into the space.

The old man got out and said, 'Hey what are you doing?'

The porsche guy got out of his car and said, 'Young and fit, old Geezer.'

The old man got back into his car. He pulled a few yard away from the porsche and rammed it with his Mercedes.

The old man then told the young guy, 'Old and Rich!'

The policeman came out but couldn't do anything, as it was just property damage. He told the young guy to sue.

Can you imagine the guy's face when the Mercedes slammed into his porsche?'"

Albert was waiting upstairs at Brophy Brothers. There, I ordered a glass of champagne and half a dozen raw oysters. Putting on a New Zealand accent, I then asked for "Fush and chups."

I didn't forget that story about Young and Fit v. Old and Rich when this woman was in her volvo, spewing out her ire.

I had the legal right to have that space. It reminded me of my first year property class. There's an ancient American case called Pierson v. Post. In it, the plaintiffs were going fox hunting. They chased and chased the fox. But at the last moment, the defendant knowing that the plaintiff almost had the fox, snatched it for himself. This is a core legal property principle - that persists even today. At what point does property rights actually materialize? If someone steals my sperm while I'm sleeping, who owns it? (real cases).

Back to the fox. The court reasoned, No. The plaintiffs only had an expectancy or a hope to have that property. The property of the fox belonged to the defendants who was the first person to physically capture and possess it.

This is exactly what happened with the parking space. I'm the defendant who captured it first. The angry lady is the plaintiff who sues. But in the end, like in Pierson v. Post, me persisting would have been a lose/lose. Both parties in that case, accrued legal fees that surpassed the value of that dead fox. But good on lawyers for milking the system, even in ancient American times.
Posted by Paul C. at 11:01 PM