The Foiled Robbery: A Community's Effort To Catch Thieves 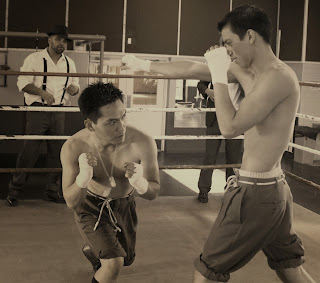 "You intended to harm me, but God intended it for good to accomplish what is now being done, the saving of many lives." - Genesis 50:20 (NIV).

This is a story of the chance encounter of a number of lucky factors, the uprising of good people, and the grace of God.

I was sitting at my usual chair at the Baldwin Park Starbucks, when a thief snatched my wallet.  A youth who had a shaved head, a piercing in his eyebrows, and one through his mouth,  who was about 5' 5", 120 lbs (57 kilos), drugged up on meth, approached the front counter of the Starbucks.  He asked to cash out ten dollars from his Starbucks gift cards, which he most likely stole.

I set my wallet on the left bottom corner of the desk, which was a special desk because it was the same desk I sat at to study for the bar, write my first fictional short story, my latest academic piece, and a number of journalism articles.  My wallet was out because I was paying my bills online.  It was at an arm's length from me.  But before I paid my bills, I used my online banking to donate money to a Christian charity, in which one of the executives gave a talk for my boxers.  Money was tight.  But nonetheless, a living is made by what someone earns.  Lives are made by what you give.

And after I clicked to give that donation away, I saw my wallet swiped from the desk and a youth running out the door.  My cup fell over and splashed coffee everywhere.  And I thought to myself, Oh, hell no!  In less than a second, I kicked off my leather flip flops.  Barefooted, I chased him to his getaway car.  Inside, was a fat, Hispanic girl with straight hair, waiting at the wheel.

He hopped in.  The passenger window was open.  I saw my wallet on his lap.  I thrust my arm in and grabbed my wallet.  It turned into a tug of war for the wallet.  He kept shouting, "Go!  Go!  Go!"  She accelerated the car.  I was running with the car to keep up.  She was confused and nervous.

But I could see he was shocked that I had caught up to him.  I was waiting for him to punch me, so I could jump in through the window and pommel him.  He never did.  After feeling the shock of my aggression, he released the wallet.

The silver Toyota Camry sped towards the freeway.  I tried to memorize the license plate number.  I jogged back to the Starbucks, barefooted still, and was met by the crowds inside who wondered what happened.  I held out my wallet to show them the trophy I got back.

A customer had taken down the license plate on a napkin.  I called nine-one-one.  The Baldwin Park Police came to the Starbucks in five minutes.  The Sergeant on duty studied me and said, "The Boxing Lawyer."

I smiled and said, "That's me."  The customer who got the license plate number and I gave it to the Sergeant.  He ran the plate.  He jumped in his SUV.  He was off hunting the suspects.

A Felipe Gallegos, who was on the force for three weeks, took the police report.  He was thorough and spent a good hour interviewing all the customers, staff, and myself.  His partner was Steve Manjeras.

After he took my report, I called my head boxing coach - Julian Casas.  I started the phone call by saying, "You'll never guess what happened.  I was robbed."  I proceeded to tell him the whole story.

He was over in fifteen minutes.  The Starbucks store manager gave me a small salted caramel Frappuccino to calm me down.  The adrenaline was pumping in me still.  Julian got a coffee.

Outside, in the fall, golden sunshine, I told Julian everything that happened.  It was good he came over to see that I was fine and safe.  The strange thing was all the details of the flight and the struggle with the youth was one blur because of the adrenaline rush.

My mother kept calling.  Her instincts must have kicked in to tell her that all was not right.  She said, "Hey!  Where are you?  You were supposed to come home already?"

I replied, "I was just robbed!"

"Well - go get some chicken food.  They're hungry."  We have three of chickens.  We enjoy watching them very much because they lay eggs and act like the Three Stooges.

After Julian and I finished chatting, I drove off to go get the chicken food in El Monte - the city East of Baldwin Park.  While I drove back home with the chicken feed, I received a phone call from Officer Manjeras.  The sergeant drove to the house of the registered owner of the vehicle.  On his second visit to the home, he caught the suspects and needed me to identify them at the field.  I told him I'd be at the station right away.

I drove to the police station.  The officers on duty had greeted me with a smile.  They had heard that I had foiled the robbers.  I met the Officer.  We walked to his fastback squad car together, at which point, he opened the back door for me.  I sat on the hard plastic.  While he drove to the field site, I interviewed him.  He looked familiar.

Officer Manjeras originally wanted to become a priest.  Then he had a powerful spiritual experience, which changed his life and committed himself to the Christian faith.  He joined the police because he wanted to do good for people.

He asked me why I became a lawyer.  I didn't really have a good answer for him, except I said I thought I could make a bigger difference for people as a lawyer than a doctor.  He then admitted something to me, "Hey, I already know you."

"Yeah, remember when that crazy punk kid pulled a gun on you?"

And the torrent of memories flashed before me.  In the summer of 2012, while I was at my mother's house, the son of the Cholo drew a gun on me.  Officer Manjeras arrested him, after I reported him to the police.

We had reached the field site.  It was at a dirty trailer park.  The 20 year old ugly, fat, 200 pound girl was in handcuffs and so was the small, 16 year old youth.  She had gym shorts on of the local community college.  She looked so ashamed, had been crying, and pathetic.  He had that look of defiance.  I felt so bad for both of them.  Their lives flashed before my eyes.  Having a poor self-image, she must have did what this youth said so she could feel loved.  But he didn't love her.  He was using her.  It was so tragic.

I told Officer Manjeras, "That's them."

Manjeras drove me back to Baldwin Park.  I thanked him from the bottom of my heart.  I was grateful for the thorough and quick response of the BPPD.

I was truly grateful to God that day.  I got my wallet back.  I wasn't harmed.  And the suspects were caught - although I felt bad for what might happen to their lives.  They were so young.  I even felt that my day opened with the Christian act of generosity and ended with a person of faith sharing his life with me and serving me.

I entered into my Z3.  While driving back home, I realized something important.  The evil and danger I had faced that day really brought out the natural responses of the community.  There was my quick, confident, and athletic response to the thief from all the training I learned at our boxing club.  Then there was the concerned boxing coach, who came over right away.  There was the customer at Starbucks, who came to rescue of a stranger.  The Starbucks staff, several of them who live in Baldwin Park, helped the police.  And let's not forget the thorough and compassionate police.

The only question my reader may have left is: why it was considered a robbery without a gun or knife?  For those of you, interested in legal analysis, it started as larceny.  The boy ran off with my wallet that was on the desk.  But when I ran to the car and grabbed my wallet, I committed the crimes of trespass and battery.  I had invaded their space by putting my arm through and touched the boy without his consent.  Nonetheless, the trespass and battery were privileged by the self-defense of property.  The moment the boy told the girl to go, they were using the car as a weapon and that constitutes the use of force.  Since I was holding the wallet, it was attached to my body.  And that's how a grand larceny turned into a robbery.

And this story is about how a robbery turned into a community's caring response for one of it's citizens.