Megan Elizabeth Hadsell, 19, daughter of Baldwin Park Chief of Police, and Chase Gross, a 23 year old Upland resident were caught with the possession of narcotics inside a car parked outside of Motel 6.  The Chino Police arrested the two on October 15, 2013.  Charges were filed at San Bernadino Court House on October 22, 2013.

The Chino Police Department stated that Megan's charges are still being investigated.  Megan's been charged with Health and Safety Code Section 11350(a), which is the usual violation for having cocaine, crack, heroin, or hallucinogens.

The particular Motel 6, located on 12266 Central Avenue, Chino, has a reputation for illegal activity and drug trafficking.  One guest stated that, the motel clerk "had to call in our driver license to see if we were outlaws. [The clerk] was behind a bullet proof glass . . ."

Another guest of this Motel 6 criticized that the "place was always full of people. . .  Trucks and cars were coming and going from the parking lot all night long.  People were hanging out just outside their rooms using cell phones."

The incident only stresses and perpetuates the rampant nepotism, under-performance, corruption, and hypocrisy of Baldwin Park's public officials and administrators, which the local city boxing club has been protesting since June 19, 2013.  Megan's involvement with alleged drug trafficking and hardcore drug addictions points to the failure of Chief Hadsell's leadership.

Baldwin Park has an epidemic problem with substance abuse.  Drug related arrests are the most common arrests in Los Angeles County, where Baldwin Park is located.  These type of arrests have soared since 2007.

Hadsell's appointment as Chief of Police exposes the cronyism and corruption of the City's hiring practices.  Hadsell came from San Marino Police Department.  She served as lieutenant for a number of years but was never made Captain, which is the next position before Chief.  Hadsell, agreeing to the unspoken rules written by Council Member Marlen Garcia, Mayor Lozano, and City Manager Vijay Singhal, leapfrogged Captain Taylor for the position of Chief.

It is a well known fact that Captain Taylor suspected that Council Member Marlen Garcia would promote Chief Hadsell.  He asked Hadsell, out of respect, to notify him if this would take place.  Instead, Marlen Garcia, Singhal, and Hadsell waited for the ideal moment.  The Captain gave notice of his holidays to Japan.  When he was away, Garcia and Singhal appointed Hadsell to Chief.

In the last two weeks, Hadsell followed these unwritten rules by sponsoring an unqualified officer, who is also a close friend, ahead of those who perform.  Fearing that her time in office may be short because of the uncertain political climate, Hadsell expedited the promotion of Sergeant Mark Harvey to lieutenant by creating a new lieutenant position.  Although the administrators claim there's no money in the budget, the promotion over ten years will cost the City at least $100,000.

Sgt. Harvey has been a sergeant for two years, even though the average time one must spend as a sergeant before becoming a lieutenant is six years.  Harvey is close friends with Hadsell.  Both knew each other from San Marino Police Department.  Both transferred from there to Baldwin Park.  She signed off on the papers to send Harvey to lieutenant training, even though the next in line is Lt. Parnell.  Regarding competence, Officer Kuberry and Officer Marks Adams have scored higher on objective testing than Harvey.  According to the Police Association, the two have not been promoted because Marlen Garcia has retaliated against them and their First Amendment Rights for picketing her years earlier.

Because Chief Hadsell cannot question Garcia and Singhal's decisions, but represents the BPPD, she's become a controversial figure in Baldwin Park.  Mayor Manuel Lozano, Mayor Pro Tem Raquel Garcia, and Council Member Garcia and City Manager Vijay Singhal have attempted to fire all the local police officers and replace them with the Sheriffs.  Hadsell would allegedly receive a severance pay.

Since Hadsell could not go against her superiors, she's left the police open to public criticism by Singhal, the Garcia Council Members, Mayor Lozano, and their supporters, who have commented on the officers' incompetence and costly salaries.  To counteract their undermining, citizens called for Chief Hadsell to sign a letter that stated she would support her men and women, at a Council Meeting.  She did so reluctantly.  David Gonzalez, Public Organizational and Leadership Consultant, stated that Garcia's open criticisms and the Chief's passive sponsorship of them has left Baldwin Park's officers vulnerable.

Megan's arrest has opened dialogue in Baldwin Park, one that asks whether it bears on the Chief's leadership.  Greg Tuttle, small business owner, stated, "It's disturbing that she can't handle things at home.  How can we expect her to handle things in our City?"

Julian Casas, head coach of the boxing club and resident of the city, agreed: "Order needs to be at home first.  She doesn't have it there.  She shouldn't bring her problems into our city."

Though Jessie, a 16 year old Baldwin Park high school student, stated, "Home and work are different.  They need to be kept separate."

To that, Tuttle replied, "She has a daughter on hardcore drugs.  She's a police officer.  She can't tell me she doesn't know what her daughter is doing.  A good police officer would know and keep that under control.  If she can't keep things under control at home, how she's supposed to do it with a City?"
As Chief, Hadsell has been known to deal with such family problems by interfering and tampering with the law enforcement and the justice system.  She did so in West Covina, when her in-laws were in trouble with the law.  For this, she was reprimanded by the Baldwin Park City Council.  One resident noted that he hoped that this would not happen with the San Bernadino Courts or the Chino Police Department, and that the justice system would be impartial to a police chief's daughter.

Hadsell has continued the legacy of having family members of public officials and administrators engaging in illegal activity.  Mayor Lozano's brother, Guadalupe was arrested for possessing controlled substances in Mayor Lozano's truck.  Marlen Garcia's daughter - Delilah was caught joyriding her mother's car without a license.  Unlike many of the undocumented who are caught doing so, the car was not impounded for the mandatory 30 days.  Natalie Ybarra, Lozano and Garcias' favored Council Member candidate, allegedly has a family with a gang history.  Former Mayor Fidel Vargas had to resign upon charges of punching his wife.  Having family members, whom engage in illegal activities, is perhaps the fifth unspoken rule to be in power in Baldwin Park.

The link between Megan's arrest and Hadsell's performance has one commonality.  She's having difficulty managing dysfunction - whether it's at work or at home.  Hadsell's been seen running out of City Hall in tears, as news of her daughter's arrest has surfaced on forums.  How is she focused on reducing crime when her mind and energy are spent on crime she can't control at home?
* * * *
Note from the Author:

I have to disclose for the objectivity of this piece that I've had my conflicts with Chief Hadsell.

1) For interviewing a former employee, and not a current one, Chief Hadsell violated my First Amendment Rights, by threatening me with a phone call from her lieutenant.

2) When I was inspecting public records, Chief Hadsell, under the command of City Manager Vijay Singhal, had her cadet watch me viewing them in a police interrogation room.  It was an attempt to intimidate me.

3) When I started publicizing the corruption in Baldwin Park, Chief Hadsell began interrogating her officers as to which one was leaking information.

I don't believe any of these facts bear on the objectivity of this article.


Since Mayor Lozano and Council Member Marlen Garcia and administrators have called me a fabricator, one who twists facts, and a liar - all in defamation of my character - I have decided to publish the Chino PD press release and court history here. 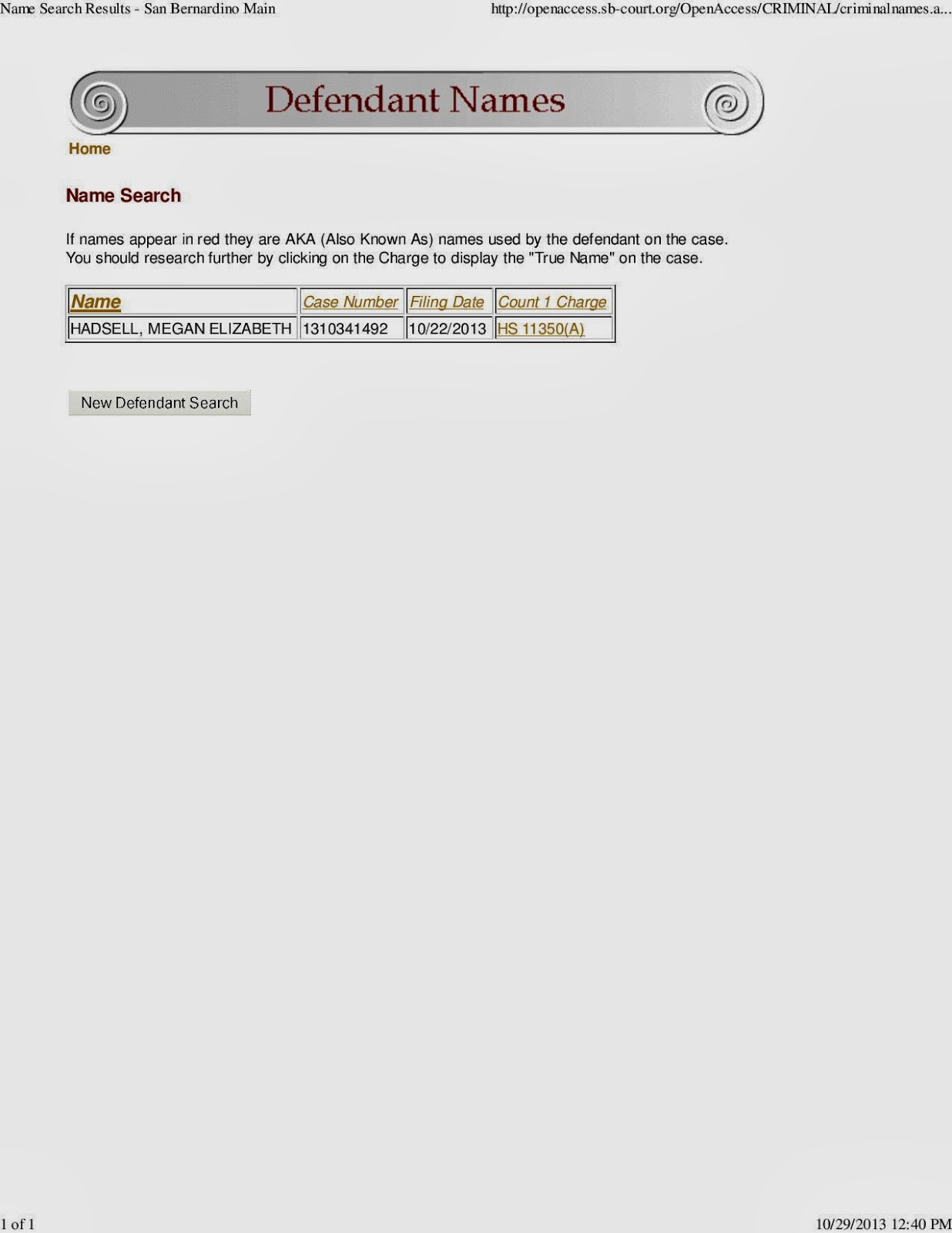 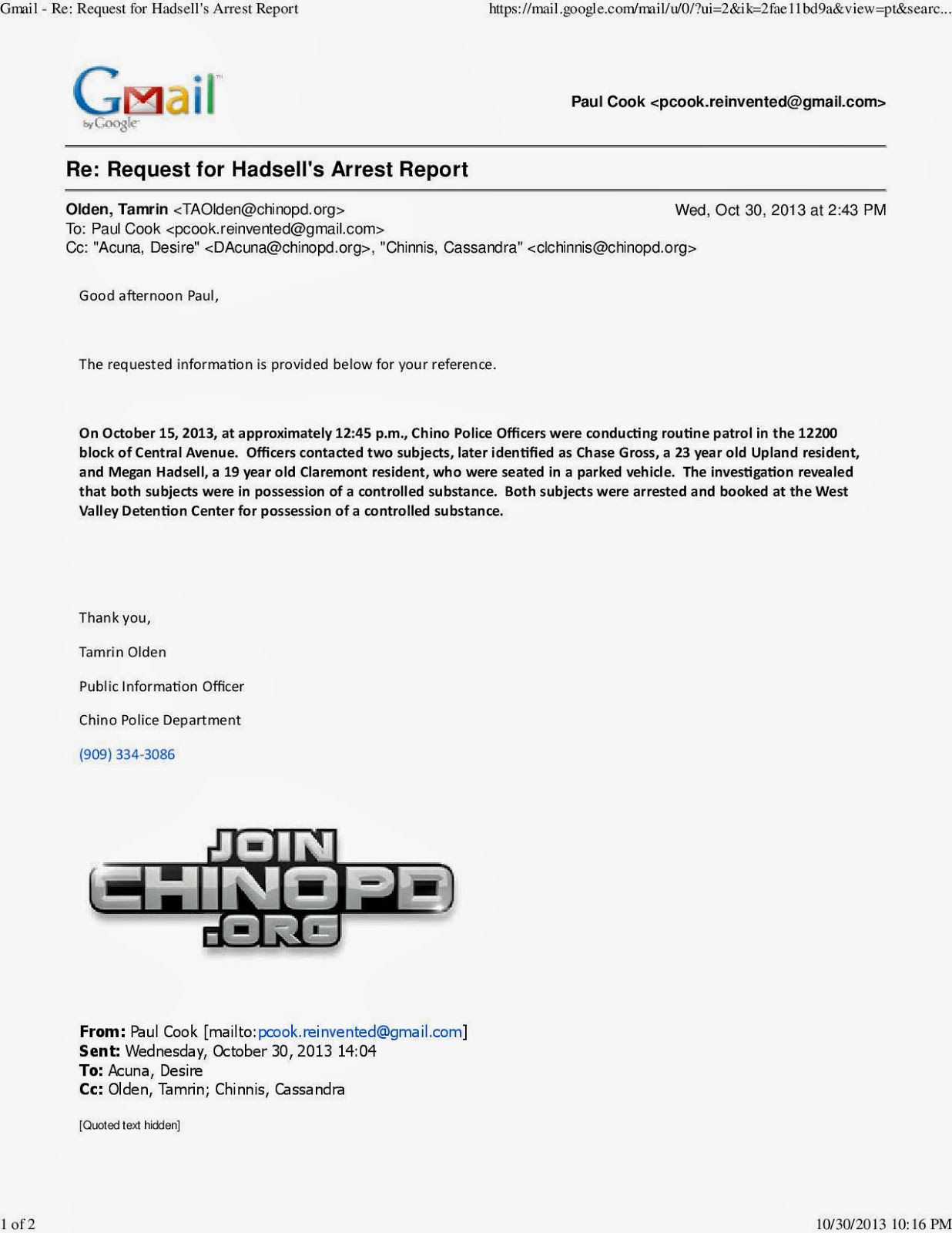