EXTRA! EXTRA! BOXERS MAKE THE FRONT PAGE OF THE NEWS! 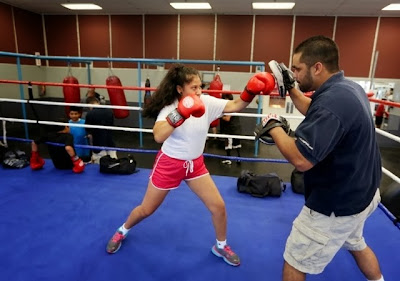 Children and youth, like Alejandra Pacheco, find the boxing gym a safe haven to be at after school.

La Opinión, the largest Spanish newspaper in the United States, and the second largest paper in Los Angeles, wrote an article on the boxers of Baldwin Park.  I'm translating it here.

The Boxers In Baldwin Park Refuse To Throw In The Towel:
The boxing program survives, despite budget cuts and claims of mismanagement.
By: Virginia Gaglianone
Photo: Emilio Flores
Translation: Paul Cook

Christian Flores found a passion in boxing.  Since childhood, the young resident of Baldwin Park began training, thanks to the program offered by the City. But in recent years, the program, which has been visited by personalities such as Oscar de la Hoya and Sugar Shane Mosley, has had its hours and its coaches reduced.


"They [the management] always said that the reduction in hours was for budgetary reasons, but when we started investigating, we noticed that it was not," said Paul Cook, one of the volunteers of the boxing program.

Cook was born in Baldwin Park and lived there until attending university. He returned to the boxing gym, while preparing to take the bar, which is the licensing exam for lawyers. The boxing training helped him in training for sitting the bar. "I wanted to do something to give back to the community that helped me so much," he recalled. Cook decided to raise money for the boxing program with the intention of returning it back to the state it was in the past. He thought it would be simple, but, instead, he encountered obstacles and unanswered questions.

According to Cook, each program participant pays $15.  That amount multiplied by the number of participants yield a sufficient amount to reopen the gym Monday through Friday. Currently, the boxing program operates Monday through Wednesday and three hours on Thursday.

"The kids need more teachers. The truth is that the gym needs more trainers," agreed Mike Salas, founder of the program.

"Until 2005, we made national boxing champions for the Blue and Gold Tournament," said Julian Casas. "This program really changes lives," he said, saying that it helps young people to keep them busy and off the streets.

Casas and Cook believe that the lack of money for the program is due to alleged mismanagement of funds by the City administrators. They also claim that the aquatic program receives more funding, despite being open only three months a year.

Last Wednesday, during the Council meeting, Casas filed a claim under the Public Records Act against the City Manager, Vijay Singhal, for allegedly refusing to disclose certain municipal records having to do with the budget.

"I really did not want to sue them," said Cook. "We're just asking for them to have a performance evaluation. Is that asking too much?"

Manuel Carrillo, Director of Recreation of the City, responded to the allegations saying that the complexity of the budget makes it confusing and that this is what is resulting in the accusations of embezzlement.  He said the budget is public and is reviewed annually by an accountant firm.

Carrillo said the boxing program was reduced by 25% a year ago, along with the summer concerts, the swim team and summer camp, among other programs. He also said that to have kept the boxing at its hours would have cancelled the other programs.

"The City of Baldwin Park is proud to improve the quality of life of its residents," said Carrillo. "Although the program has a reduced schedule, there are still four days in the week and three coaches that are dedicated to boxing program."

The original and Spanish version of the article can be found here: La Opinion Article.
Posted by Paul C. at 11:12 PM