On Free Speech - A victory for all people! 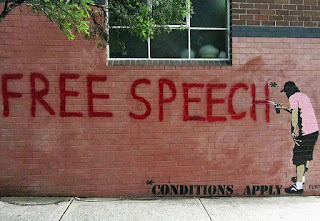 Today, we have a victory, as the local newspaper - the San Gabriel Valley Tribune - published how the residents of Baldwin Park defied the City - and the City backed down and relented in permitting these residents to display their signs, criticizing political corruption, again. You can read the story here. Baldwin Park agrees to allow signs depicting councilman as donkey in attempt to settle lawsuit

(To briefly summarize, if you haven't been following this saga, Greg Tuttle, Juan Rios, and others, hung banners on their building, which characterized a council member as a donkey and called him corrupt. In response, the City fined them and sent the bill to collections; Tuttle in turn sued, and the court said unless things change, that the City's sign law and enforcement of it was most likely in violation of our Constitutional Right to Free Speech.)

Although over the last few years, I've had a number of stories published in some of the world's largest newspapers, I was excited the local newspapers took this one. This is because as the media is airing stories that appear to have large magnitude - such as all the news on Donald Trump, Obama, BREXIT, and so on - I think it's important to remember that Baldwin Park's sign problem is a universal problem. Only it's being played out by small people and small-minded political officials. Nonetheless, it goes to show that global issues are being fought by the common man and woman, like you and me.

We cannot live in a democratic or free society, a society where we the common people vote for our elected officials, without having the ability to openly criticize them. In order for democracy to be at its optimal capacity, people must know as much as they can about those in or running for office. That way, the people voting can cast their vote in a way that best reflects their values and thoughts and feelings. And in order to have the maximum amount of information available about public figures, people need to be able to express their thoughts and ideas freely - even when disagreeable to those in power.

In contrast, for tyrants to stay in power, tyrants must close off channels of information that expose their oppression of the people. I have two personal examples of this.

The first one was when I was in Turkey in the summer of 2014. Then, the people were protesting at a central park in Istanbul. Prime Minster Erdogan had tear gas thrown as the people, and the police were ordered to attack the protesters. Two and a half years later, we have seen how Erdogan has become an authoritarian tyrant.

In my second example, when I was in Berlin, I went to the Topography of Terror Museum. The Museum stressed that the first step the Third Reich took to create a totalitarian regime was to eliminate anyone who criticized the party. The parade of horribles, as we all know, shortly followed.

There's also a legendary story that King Christian X of Denmark ordered the removal of the Nazi Swastika flag flying over parliament. A soldier said that whoever removed the flag would be shot. The king then said you'll have to shoot me, since I'm doing it.

There's much debate now as to whether the story is true, even though it was published in the American newspapers. Nonetheless, we do know that the Danish people wore pins of their own flags and silently resisted the Nazis in many ways. Many of them spent their own money to send their Jewish citizens to Sweden by boat. Because of their Danish resistance to comply with immoral orders, the Nazis failed to take full control over Denmark.

And that is exactly the point. When a few people refuse to cave into those whom abuse their power, such regimes begin to corrode.

So, when a few residents in the unknown City of Baldwin Park decided that they had enough of Council Member Ricardo Pacheco's abuse of power, they let people know it by also raising banners against him.

Pacheco, like other tyrants before him, attempted to punish them. But, these residents didn't back down. Instead, they fought back, and in the end, protected our right (an ancient 800-year-right that is rooted in the English Magna Carta, executed in 1215 AD) to speak freely against those whom  would rather harm us, rather than advance us.