Rainy Los Angeles - Being at Cabins, Work, and Breakfast 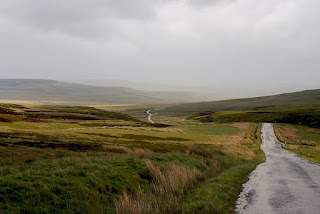 It's been raining a lot this week, and it makes me wonder if I brought the European weather back home to sunny, California. Yesterday, I ran at some local hills (the same hills where I see coyotes and owls), and the dark weather transformed the entire landscape. The rain carved streams into the hills. The birds were fluttering from bush to bush, and it looked more like I was running in Wales than Southern California. The mood felt bleak.

Or, maybe I just want to believe that, because a part of me wishes I was back in Europe instead of being here. For me, this winter is reminding me that part of me has died and that a year has passed. It almost feels like this winter will never end and that the spring won't come.

Nonetheless, for my international readers, California is apparently in drought. So, the rains are welcome. Given all the floods and the filling of the Northern California reservoirs, Governor Brown should already declare that the drought is over, but he won't.

My view about the drought is that it's not completely true, and yes, some of you will disagree. But when I used to live in Brisbane, Australia, we had water restrictions. And if a home used more water than allowed, that household would be fined, and a lot of money too.

My instincts tell me our Californian government is planning to do the same, especially given the $2 billion shortfall in Jerry Brown's budget this year. In other words, it's another way to tax us. (Soon, they'll be taxing us for breathing air too.) But like I said, some of you will disagree with me.

(And of course Southern California is always in a kind-of-drought. Why? Perhaps, we live in a desert, and by definition, deserts don't have a lot of water, unless it's one of those freak years when you get a flood.)

Enough on the rains, because we're only going to have more coming. And that's good for the State of California and the people, bad for Jerry Brown and his administration (because he won't be able to tax us more), and gloomy for my cat, the chickens, and me. They complain about the rain too.

I started this week by going to my friend's cabin in Big Bear. That was nice he invited me. I haven't seen him since I've been to Europe. I slept in there. It was nice. He turned on the heater. It was toasty. I enjoyed it.

Outside, he brought cigars. We sat on his porch. We looked at the forest and all the birds hovering around us. We lit cigars. I smoked one. It felt good at first, but then I got nauseous. In any event, it was good to have a short getaway.

Then I worked on some cases at the law library. For some reason, starting this brief took all the energy out of me, probably because I had to snap out of my holiday-mindset, where my biggest worries was who I would be seeing and what else I should eat with my tea and toast.

Those times are gone (at least for now). It was time to get back to the grind. There's a Korean proverb I'm reminded of: "Starting is half the work."

I also had breakfast with a friend in Pasadena this week. It was good. He's such a good listener. He also helped me break out of the deadlocks in my cases.

We both had coffee. But the morning was still gloomy, because it was raining outside. I gave him a book and told him it suited his intelligentsia-Catholic side.

Well, I have to go home and finally clean and try not to think about our state of political affairs. I told someone once: The more you know, the more depressed you get about it all. Hence, ignorance truly is bliss.

Also, this week I finished the Netflix series The Crown. It's highly recommended. I think it's pitched to women, generally, since the main character is the heroine Elizabeth Windsor II, but I think Winston Churchill's role certainly adds much comedy and masculine touches to the show. Highly recommended. (Now, people have recommended me a list of other shows and videos to watch; I'll try to get to them.)

In the meantime, it's time to clean and tidy my rooms in my house. These chores have been long, long overdue.
Posted by Paul C. at 1:20 PM