The Fate of the Greedy Parks and Recs Director 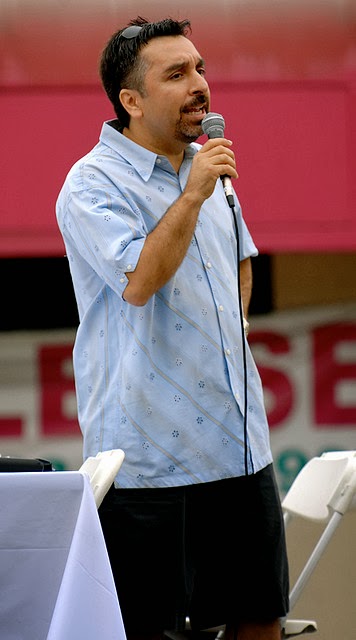 (Manuel Carrillo Jr. on the left.)

I wanted to update you on what's happened to Manny Carrillo, the Parks and Recs Director.  A number of you wrote to the Council Members.  I found it disheartening that Council Member Pacheco stated to many of you that Julian refused a raise.  He defended his pet Carrillo.  And he said that Julian made up a lot of the facts that we spoke of.

Council Member Pacheco is correct that we were incorrect about one fact.  We stated that Carrillo got a $15,000 a year raise and Julian - the boxing coach got a 40 cent raise after 14 years.

But when you look at what they claim to pay Manny Carrillo on the Baldwin Park website, it's all a lie, and more lies.  http://www.baldwinpark.com/index.php?option=com_docman&task=doc_download&gid=980

On the website, it states that they only pay $140,000.  LIES!  The statement says, "The E-Team does not receive deferred compensation, housing allowance, bonuses or additional stipends or compensation. E-Team contracts do not include any automatic raises or increases either."

His current pay is over $193,000.  That's a $6,500 raise every year for the last four years.  What does the website mean that there's no automatic raise?!  Just because it's not in the salary pay.  It would be better if it was in the salary pay instead of his perks because he's not even paying taxes on the perks!

Did you notice that administrative leave?  This guy gets 7 weeks of leave a year!  And two company cars.  And the gas to fill up. He doesn't even work 12  months a year.  He works only 10!  Council Member Pacheco says he has a college degree.  I've never seen it in Carrillo's office.

There's a reason why.  And I'll tell you guys soon.  Carrillo revealed all.

Manny Carrillo is on stress leave after the boxers publicly stoned him with our testimony.  How could the City of Baldwin Park justify paying this guy so much, if he can't handle hearing the truth from the kids?

The leak report, however, tells me that Carrillo's been asked to look for another job.  Council Member Pacheco wants to give his job to Maria Moreno.  She's currently Manny's second in charge and another underperformer without a college degree.

In Baldwin Park, we tell our boxing kids, if you want to get a high paying job with the city, don't get a college degree, learn to be lazy, and learn to not perform.

Baldwin Park is the shame of the San Gabriel Valley.

Pacheco hates receiving emails on this subject.  So, please send him more:

You can also email Carrillo about what you think about how he is bleeding our city dry and how he treats employees.  mcarrillo@baldwinpark.com

Join the fight.  Share the story.  End the corruption in Baldwin Park.

From the desk of the boxing lawyer,