Baldwin Park City Attorney Threatens Me With Another Restraining Order! 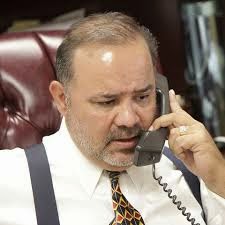 City Attorney, Robert Nacionales-Tafoya (aka Robert Tafoya or Robert Nacionales), sent me a threatening cease and desist letter.  Again, the City of Baldwin Park attempts to chill my speech.

I emailed the Finance Director, Craig Graves, the news article that I had prevailed against the City of Palm Springs for its Public Records Act violation.  I won Graves' personnel file and discovered that he was forced to resign from Palm Springs.  No wonder, he only cooked the books at least twice in Baldwin Park.

After sending Graves that email, Tafoya billed the City for writing this poorly drafted email to me:

(The Face of Baldwin Park in Court)

I write to request that you immediately cease and desist sending harassing and offensive emails to City Staff including, but not limited to, Mr. Graves.  If you continue these unnecessary, harassing and offensive emails, you will force me to go back into Court to seek that the Court again request that you stop the harassment.
I trust this will not be necessary.

What don't these people understand about the First Amendment?  Can't the Finance Director delete my email?  What's the threat of winning a lawsuit against the City of Palm Springs?  Don't I have the right to talk with directors of my city?  And when does the City get to decide what is intimidating and harassing for me to say?  And finally what does he mean that he'll have to again request the court to issue me a no harassment order?  One wasn't issued in the first place.

The City is once again attempting to bully me into shutting up.  That's because I know the truth.

Manny Carrillo, the Director of Parks and Recreation, launders money through his non-profit.  The sad thing is when the City found out that the former boxing coach and I knew, the City fired its boxing coach.  Julian Casas worked there for fourteen years, even though he received a 40 cent raise after 14 years.  In contrast, the City gave Carrillo a $40,000 raise after one year.  Now, he makes $180,000 a year - arguably, the highest paid in the San Gabriel Valley.  That's not including his perk of having two company cars.

If that wasn't enough, the Mayor arrested and jailed me for booing Manny Carrillo and passing out paper at the park.  Then the Mayor filed an emergency restraining order against me.  The City Attorney did such a terrible job arguing the case, the judge refused to issue a restraining order.  I mean come on: you could win on hearsay evidence, the other party doesn't have to be there, and witnesses don't need to show up.  Even then, he lost.

Everything they've done to my boxing coach and me is so un-American, some days I wake up and ask myself if I'm really in the United States.  Baldwin Park has become Nuevo Tijuana (New Tijuana), crowning it the Shame of the San Gabriel Valley.
Posted by Paul C. at 12:14 AM