Court of Appeals Results - the Good and the Bad 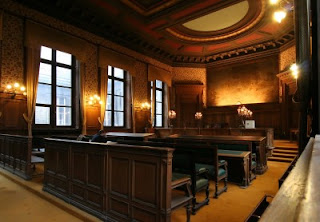 So, yesterday, I received the Court of Appeals results. The issue Julian Casas presented to the court was whether the city could pay for the legal defense fees of the sham non-profit the Baldwin Park Community Center Corporation the BPCCC. There was good and bad news, but in short, apparently, the Court of Appeals does say that the City can run an alter-ego non-profit as part of city business.

Before I begin to explain the issue, I want to take some time to explain the purpose of an alter-ego non-profit corporation. Alter-egos are generally used to launder money or cheat share holders. Enron did this by having an alter-ego corporation of Enron. So, it was able to transfer all losses to the sham corporation, which made Enron's profits look good, which made shareholders want to buy more shares. In the case of the BPCCC, Casas and I are alleging that the City is using it to collect money in the form of bribes from private businesses. It's then laundered out by buying Walmart gift cards at a sham Christmas event, where those gift cards are unaccounted for.

The good news about the opinion is that the Court of Appeals made a finding that Baldwin Park is running a sham non-profit corporation. What it actually states in footnote 6 is, "Although Tafoya has conceded that BPCCC is an alter ego of the city of Baldwin Park, we note but do not address the liability implications that may arise in tort or other areas of law if BPCCC’s corporate entity is disregarded. (See Hub City Solid Waste Services, Inc. v. City of Compton (2010) 186 Cal.App.4th 1114, 1122.)" That means Baldwin Park is indeed running a non-profit corporation, in which it's not meant to be run.

Another piece of good news is that the court found that there were sufficient ethical problems to trigger court review. In other words, the court had to take a seriously look at Tafoya representing the BPCCC.

Baldwin Park tried to argue that Julian didn't ever have a prior relationship with Robert N.-Tafoya, so he had no right to ask for N.-Tafoya to be kicked off. (This rule generally applies when the attorney knows private information regarding an individual and that turns adverse against him; in that type of case, the attorney usually can't have an adverse relationship with a prior client because he knows too much about that client.) But the court stated, it could address the issue because it wanted to secure the "integrity of the judicial process". In other words, the court recognized something didn't look right here, in this type of attorney representation and wanted to ensure the fair play of justice for the courts and both parties.

The court, however, refused to say that the City couldn't pay the BPCCC's attorney's fees. (Right now, the question of attorney's fees is on the minds of several concerned citizens. Like, is the City paying for attorney's to file frivolous restraining orders against him? Did the City pay Tafoya to defend the Mayor in the small claims case? The City also doesn't want to release attorney's fees as to how much it's been paying attorneys. It appears that these small cities hire these small law firms to be City Attorney - instead of hiring a permanent one, like Pasadena or Los Angeles - and this in turn, we fear invites corruption as these attorney firms are charging outrageous rates - which we believe trickle back to the politicians.)

I certainly appreciate that the Court of Appeals took the issue seriously and listened intently on our issues. I do feel a bit disappointed, it didn't go as far as I wanted it to. But I understand that there are other considerations that the court had and the concerns of long term ramifications.

Well, where next? I talked to the client. He gave me the green light to file the case in the California Supreme Court. It's rare that the Supreme Court takes up such cases, but hey, there's always hope. So, as they say, it's not over, until the fat man sings.

You can read the unpublished opinion here: Unpublished Casas Opinion
Posted by Paul C. at 4:29 PM