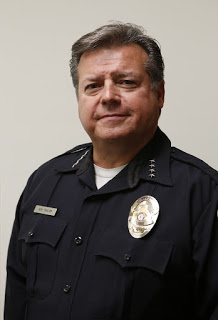 On September 21, 2016, at Baldwin Park's special meeting, Mayor Manuel Lozano, Council
Members Raquel Monica Garcia, and Council Member Susan Rubio voted, over the votes of Council Members Ricardo Pacheco and Cruz Baca, to fire the Chief of Police Michael Taylor without cause. Taylor's worked for the City of Baldwin Park for 35 years, of which he was appointed to Chief of Police for about two years and nine months.

Although Taylor was fired without case, Lozano alleges that the real reason that Taylor was fired was because he was racially discriminating by not promoting younger Latino officers. One member of the public thinks that the majority undertook the move, to curb in the power of Ricardo Pacheco, who worked closely with Taylor to get his deals pushed through.

Previous to this firing, the former Chief of Police, Lili Hadsell attempted to fire Taylor when he was captain, for showing up to work late, doing school work instead of police work, and working on his own personal stalker case. Hadsell discovered that Taylor had a vehicle repaired at the official police garage for free, and she thought she had him. At that point, Taylor threatened to black mail a number of people by exposing their corruption and hiring a lawyer. Hence, that firing never took place.

Taylor has several notable achievements as chief. Besides working approximately 20 hours a week, while earning about $250,000 a year; going home early to drink at bars; showing up to work with hangovers; it's also been alleged that he's spent all of the federal grant money given to the police.

He also ordered an investigation on Julian Casas, former boxing coach who was making $8.40 an hour and on myself. When he found nothing, he still signed off on Julian's firing. Julian worked for the City for 20 years.

To top that off, he cost the City $67,500 in a civil rights lawsuit, by ordering me arrested, jailed, and strip searched for passing out leaflets at the city park.

In his latest scandal, it's been estimated that Taylor's spent over a quarter of a million dollars on "office furniture," though not all of that furniture can be located.

Taylor has also pushed both finance directors to misrepresent the city budget, so that it looked like there was plenty of money so that Taylor could get a raise, which would increase his retirement payout, until he died. At one council meeting, the former human resource director, Shama Curian ran our crying and screaming that she couldn't take anymore of lying about the city budget. And that Taylor was putting too much pressure on her. She quit. Taylor put the same type of pressure on the former finance director Craig Graves as well.

Taylor's firing is the second round of firing for the office of the Chief of Police since December of 2013. Since then, every management team position has had a firing, except for the Director of Parks and Recreation Manuel Carrillo Jr. It's suspected that Lozano, Pacheco, and Garcia refuse to fire Carrillo because he's involved with their multiple conspiracies in financial misappropriation.

Here's an overview of the people fired (or forced to resign). In December of 2013, Vijay Singhal, City Manager; Lili Hadsell, Chief of Police; and the Joseph Pannone, City Attorney were all fired. Then came the firing of the finance director, Craig Graves, who had just replaced the former finance director who had just resigned. A few months ago, the Council Members fired Marc Castagnola, the community development director. After, the public works director Daniel Wall resigned. Once again, the only person on the management team, who has been there since the 1990's is Manuel Carrillo Jr.

All in all, Michael Taylor may be the greediest and laziest chief that Baldwin Park has ever had. His legacy will be remembered by his alcoholism, allegations of sexual harassment, corruption, selfishness and greed. Boo to the chief.
Posted by Paul C. at 11:02 AM